Drumdrops have released the latest addition to their arsenal of acoustic drum sample libraries. The brand new Mapex Heavy Rock Kit features a collection of carefully sampled sounds of a Mapex Saturn Heavy Rock Kit recorded at Garden Studios in London. Read on to find out what we think about this new drum sample library and to enter the giveaway for a chance to win a free copy!

If you’ve been reading BPB for a while now, you’ve probably seen our earlier reviews of Drumdrops sample libraries. Our 1963 Premier Outfits 54 Kit and Rogers Big R Dub Kit reviews go rather in-depth in regards of explaining the Drumdrops custom Kontakt 5 interface and its features. Please refer two those two articles if you’re interested in the basic features of the Kontakt 5 interface which was included with previously released Drumdrops drum kit offerings. We’ll be keeping our main focus on the brand new Groove Player and Step Sequencer components in the Kontakt 5 section of this Mapex Heavy Rock Kit review.

The kit which was used for the creation of this sample library is a Mapex Saturn Heavy Rock Kit. The recording process took place at Garden Studios in London. The drum kit belongs to Jason Bowld of Pitchshifter fame, who also toured with bands such as Bullet For My Valentine and Killing Joke, among others. Jason was hired as the drummer during the recording sessions for this sample library and all included MIDI grooves were performed by him.

The recording process was handled by Martyn ‘Ginge’ Ford from Nott-In-Pill studios. He produced and mixed albums for numerous rock and metal bands including Bullet For My Valentine, Slipknot, As I Lay Dying, Trivium and Funeral For A Friend. The recording was done in the London based Garden Studios, as one of the last projects which took place there before the studio was demolished in autumn 2013.

Drumdrops usually deliver they drum kits in three different tastes – the Kontakt 5 Pack, a smaller Multi-Velocity Pack, and the lightweight Single Hits Pack. This time the kit is available in two more flavors, with the addition of the Drum Replacement pack and the All Samples Pack which only contains individual WAV files.

All five versions of the Mapex kit are included as individual prizes in our exclusive giveaway which you can enter below. But before we get to that, let’s take a closer look at each of the five different versions of the kit and figure out what’s inside each kit.

Kontakt 5 Pack is the flagship version of the Mapex Saturn Heavy Rock Kit, featuring 7119 drum samples of 24-bit quality packed in a lovely Kontakt 5 user interface developed by Channel Robot. The Kontakt 5 instrument is delivered in two flavors – the Full version loads all the samples, while the Lite version of the instrument loads a smaller sample set which is a nice option for people who work on a laptop or a slower desktop machine. Please note that the full version of Kontakt 5 is required in order to use the instrument without limitations. 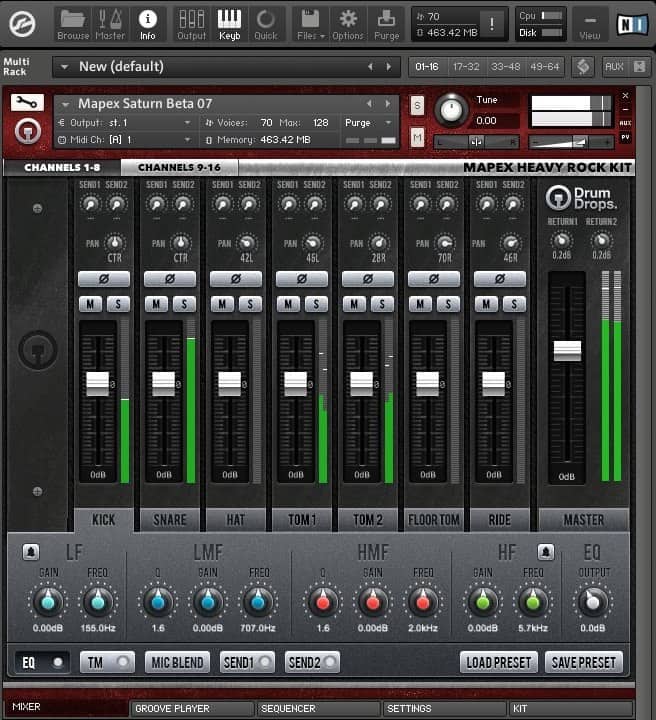 We’ve already described the basic functionality of the Kontakt 5 interface used by Drumdrops in our 1963 Premier Outfits 54 Kit review, so take a look at that article before you continue reading. The Mapex interface features all the good stuff from the previous releases, with the addition of the brilliant Groove Player, along with a Step Sequencer and a handy Groove Slicer.

The Groove Player features a set of 450 drum loops in MIDI format, performed by Jason Bowld. The included loops cover three different time signatures and a range of different tempo settings. You can preview the loops inside the Kontakt interface by clicking the little play button next to the desired loop. Once you’ve found the perfect loop, simply drag it to your DAW’s sequencer to add it to your current tune. This is a great solution for people who don’t have the time to manually program drum loops, or if you simply prefer using pre-made drum tracks.

Responsible for taking the Groove Player to the next level is the built-in Groove Slicer, which automatically cuts each loaded drum loop into 32 slices when fired up. The slices can be re-arranged in a different order, or triggered individually using MIDI notes, in two different playback modes. The Groove Slicer comes with a nice collection of pre-made patterns, which you can quickly load up and add different variations to a given drum loop. This feature significantly expands the potential of the Groove Player, making it easy to twist and mangle the provided collection of 450 drum loops which come with the product.

The Kontakt 5 interface which comes with the Mapex Saturn Heavy Rock Kit also introduces the brand new Mic Blend page, which allows the user to set the desired microphone balance for each element of the kit. For example, on the kick drum channel we can specify the desired balance of the sub kick microphone and the standard close microphone. In theory, this feature makes it possible to take out any desired channel from the overheads or the room microphones, which allows the user to drastically change the sound of the drum mix.

Once again, the built-in mixer comes with a nice library of mix presets which have been crafted by experienced mix engineers. The Mapex kit comes with 13 different mix presets provided by Billy Halliday, Joe Hirst, Paul Winstanley, Matt Foster, Ben Thackeray, and Adrian Breakspear. The included mix presets can be used as a good starting point while preparing the perfect drum mix for your track.

The Multi-Velocity Pack is the lighter (and cheaper) version of the kit, with 481 samples and mappings for all of the most popular sampler instruments. Although it doesn’t include the full-blown Kontakt 5 interface, it still contains fully functional Kontakt 5 patches, along with Battery, EXS24, Ableton Drum Rack, Maschine, Impact (Studio One),  Geist, iDrum, and Reason Refill formats. It also supports different MIDI mappings, so if you’ve used to playing BFD, Addictive Drums, Superior Drummer, or V-Drums, simply pick the correct mapping and you’ll feel right at home.

This version of the kit features a smaller collection of samples with up to 16 velocity layers per articulation, but makes up for that with the added support for a broad range of different samplers and drum machines.  It is a good choice for producers who don’t use Kontakt, or who don’t require a full-blown Kontakt interface for their projects.

The cheapest version on offer is the Single Hits Pack, which contains 117 samples with up to 3 velocity layers per articulation. It is a featherweight version of the Mapex Saturn Heavy Rock Kit, providing a good option for producers who don’t require detailed round robin and velocity variations. It can also work very well for layering on top of other drum sounds.

The Single Hits Pack supports the same arsenal of samplers and drum machines as the Multi-Velocity Pack. Due to its small footprint, it can also be used as a portable sample kit and kept on a flash drive in case you need to take your drum sounds to another studio for example.

The All Samples Pack features (almost) the entire Mapex Saturn Heavy Rock Kit sample collection in 24-bit WAV format. It contains 2487 samples from the Kontakt 5 version of the pack (with up to 16 velocity layers and 3 round robin variations) and 481 samples from the Multi-Velocity Pack. The difference between the two is that the samples from the Kontakt 5 Pack come with separate microphones, while the Multi-Velocity Pack samples come with all the microphones mixed together. No mappings are included in this version of the product, just a collection of clean WAV files.

If you’re looking for a full featured virtual drum instrument for rock and metal music production, the Kontakt 5 version of the Mapex Heavy Rock Kit is definitely a great choice. Three different snares and thirteen factory mix presets provide loads of versatility right out of the box. The built-in full blown virtual mixer expands the potential of this instrument dramatically, if you take the time to tweak the drum kit to your liking. The included library of MIDI grooves performed by Jason Bowld of Pitchshifter will make your life easier if you’re not a drummer or simply not very fond of programming drums via MIDI.

People who don’t use Kontakt will get some great sounding heavy drum sounds out of the Multi-Velocity Pack and Single Hits Pack versions of the Mapex kit, at a reduced price. Although the fully featured Kontakt 5 version is highly recommended due to its virtual mixer and groove library, these two lighter versions of the kit provide a great alternative in case you’re using a different sampler.

I would also recommend this kit for rock/metal producers who need good sounding acoustic drum samples for layering on top of their drum recordings. The Drum Replacement Kit is the perfect choice for that particular task, in case you’re using one of the drum replacement software tools supported by this version of the pack.

If you’d like to get one of the five versions of the Mapex Heavy Rock Kit sample collection for free, scroll a bit down the page and enter the giveaway! To purchase your copy of this drum sample library, head on to Drumdrops and pick your preferred version of the kit.

Drumdrops have been awesome enough to give away 5 free copies of their brand new Mapex Heavy Rock Kit to five lucky BPB readers. Here’s the list of available prizes:

We haven’t had a giveaway of this type in a while, so let’s take another look at the rules. Entering the giveaway is very easy and should take only a couple of minutes of your time. There are four different ways (three of which are completely optional) to enter the giveaway and increase your chances of winning a prize:

The first step is required, while the other three steps are completely optional and only used to increase your chances of winning the prize. Please note that by entering the giveaway you are also subscribing to the Drumdrops newsletter.

The giveaway ends at midnight on Monday, April 20th. The winners will be selected automatically using a random draw and announced on this page! The winners will also be notified via email, with further instructions on how to claim their prize. Use the form below or click here to enter the giveaway! Good luck!

A huge thank you goes out to Drumdrops for giving away 5 copies of their latest drum kit for free on BPB! Also, thank you all for reading BPB! Come back soon, as another giveaway is planned for next week!