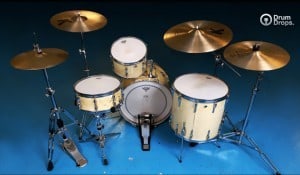 In a market so heavily saturated with high quality acoustic drum software, it is hard to draw the user’s attention to new products. Drumdrops are doing it right, though, offering outstanding quality at an incredibly low price.

Drumdrops have been producing high quality drum backing tracks for quite a while, however they’ve only recently stepped on the multi-sampling scene. My first experience with Drumdrops products came about when I loaded up their Yamaha Custom Kit which was included as a freebie in the latest issue of Computer Music Special magazine. I was amazed by the natural sound and great playability of this free sample set and I simply couldn’t resist testing the Kontakt 5 version of their first commercial product, the 1963 Premier Outfits 54 Kit.

During the recording session in The Pool studio in London, Drumdrops have multi-sampled 32 different articulations of this vintage drum kit. With up to 16 velocity steps and 6 round robins per articulation, the end result is a collection of 7182 24-bit drum samples packed in a 2.5 GB download package. There are 2 articulations for the kick drum (felt and plastic beater), 7 articulations for the snare drum (damped and un-damped center, edge, rim, plus the sidestick), 14 articulations for the hi-hats, 7 in total for the cymbals and 1 for each of the toms.

The custom Kontakt 5 interface features a handy mixer section with separate channels for each drum element, as well as the overhead and room microphones. Each channel comes with a built-in transient shaper (powered by the Kontakt 5 Transient Master), a 4-band parametric equalizer and 2 auxiliary sends. The master channel features a tape saturation effect and a bus compressor which can be used for gluing the sound of the kit. Processing the kit with 3rd party effects is possible by using the multi-out feature of Kontakt 5.

The interface also features a randomization function for various sound parameters of the drum kit. It is possible to incorporate slight variations of tuning, timing, velocity and EQ, resulting in a more natural sounding performance. I’m not a big fan of randomization because I prefer having total control while programming drums, however a tad bit of randomness paired up with a healthy amount of available round robin variations really adds to the overall natural feel of the kit.

I really like the fact that Drumdrops decided to include impulse responses of the studio room which was used during the recording process, as well as some cool vintage reverb units such as the EMT 240 plate reverb and the Fairchild 659A spring reverb. Adding a light touch of these old reverb units on the send channel gives a nice extra layer of vintage tone to this already warm and lively sounding drum kit. 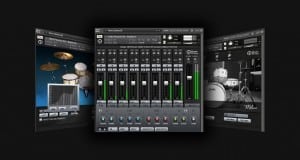 Different sections of the Kontakt 5 interface.

Once the Kontakt 5 instrument is loaded up for the first time, you can get a basic idea about the versatility of this kit by browsing through the provided mixer presets. They were created by various mix engineers and really show off the palette of sounds which can be achieved with the 1963 Premier Outfits 54 Kit. Ranging from classic rock and vintage pop to dub and hip hop setups, these presets sound fantastic out of the box and can be used as great starting points when tweaking the kit to suit the feel of your song.

Laptop users will enjoy the fact that Drumdrops have also included a Lite version of the Kontakt instrument patch which doesn’t load round robin layers, thus saving up on RAM resources. People who use drum triggers can use custom velocity curves to adapt the Premier Outfits 54 Kit to their playing style.

To see the custom Kontakt 5 interface in action, take a look at this walkthrough video by Dan Taliras from Dub Investigation:

The Kontakt 5 version of the Premier Outfits 54 Kit is priced at £35 in the Drumdrops Online Shop. People who don’t use Kontakt can choose between the Multi Velocity Pack version of the kit (which is priced at £15) and the Single Velocity Pack version (which will cost you a mere £7.50). The non-Kontakt versions come with mappings for every popular sampler out there (Battery, EXS24, Maschine and Geist to name just a few, get the full list here), as well as an extra set of samples which have been processed with vintage compressors and printed to BASF 900 ½” tape.

Offering great sound and functionality at a low price, the Vintage 1963 Premier Outfit 54 Kit by Drumdrops is an instrument library which I highly recommend to anyone looking for a classic acoustic drum sound. Whether you produce rock, pop, dub or hip hop, this drum sample collection will provide a high quality acoustic drum sound for your music projects. Keep an eye on forthcoming Drumdrops releases – they’ve already released the brand new Rogers Big R Dub Kit and announced three new kits which will be released in near future. Finally, get that Yamaha Custom Kit freebie if you can. It sounds great!