A couple of years ago, I was planning on launching a YouTube channel for BPB, so I went on a search for freeware programs to handle the job of video editing and 2D animation that I would use for the channel.

There were actually quite a few free non-linear video editors to choose from back then, but none of them were nearly as feature packed and easy to use as the recently announced HitFilm 3 Express. Since this brilliant free video editor by FXHOME is such a major game changer, we’ve decided to publish an updated and completely re-written version of our free video editing software list that you can read below.

While a list of free video editors is probably not something that you’d expect to find on a website about music production and sound design, the truth is that a lot of musicians (including myself) like experimenting with video in one way or another. Not to mention that having a decent YouTube channel can attract more potential listeners to your music. So, whether you want to create a simple slideshow video for a demo track or edit a complete music video for your latest single, this list of freeware video editing tools has you covered. Enjoy! 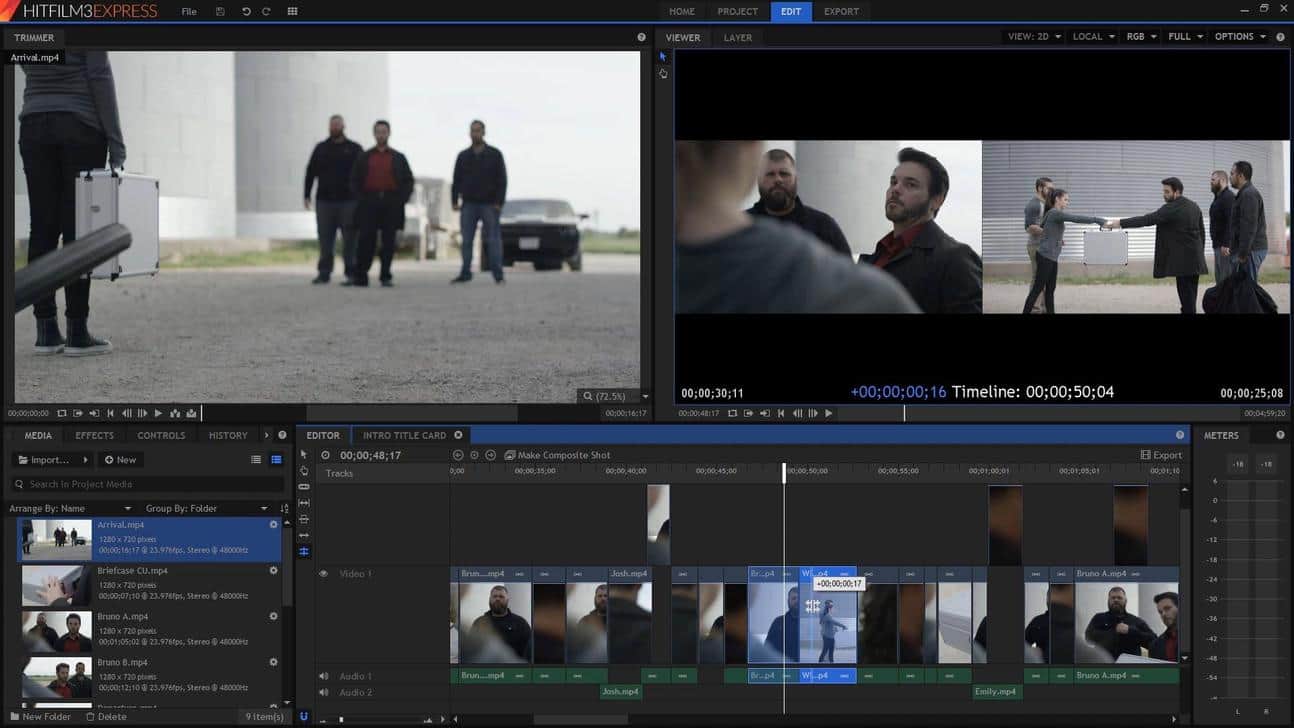 The program that changed everything, HitFilm 3 Express is arguably the best freeware non-linear video editor on the market. It is actually much more than just a video editor. Apart from basic and advanced video editing, it can also be used for color grading, motion graphics, 2D and 3D compositing, and even for adding all sorts of high quality special effects to your footage.

The free version of the software includes tons of features (full video editing support, over 100 built-in effects, motion tracking, green screen removal, etc.), whereas additional functionality (such as support for a broader range of video formats, additional effects and transitions, etc.) can be added via in-app purchases which are priced at $9.99 an up (with an additional 15% during the ongoing January sale). Still, the truth is that the basic free version of the program does not feel crippled in any way. You can use it to create fantastic videos right out of the box.

Of course, the booster packs that can be added to the free version will certainly expand your creative horizons. For example, music producers and DJs will probably want to check out the Audio-visual pack which contains a whole bunch of awesome animated audio spectrum and waveform patterns for use in music videos.

The coolest thing about HitFilm 3 Express, though, is the program’s excellent workflow and unparalleled user friendliness. This application is incredibly easy to use and you’ll find your way around it in no time, even if you’ve never edited a video before. In case you get stuck, there are dozens of helpful tutorial videos on YouTube to get you started with various aspects of HitFilm 3 Express. 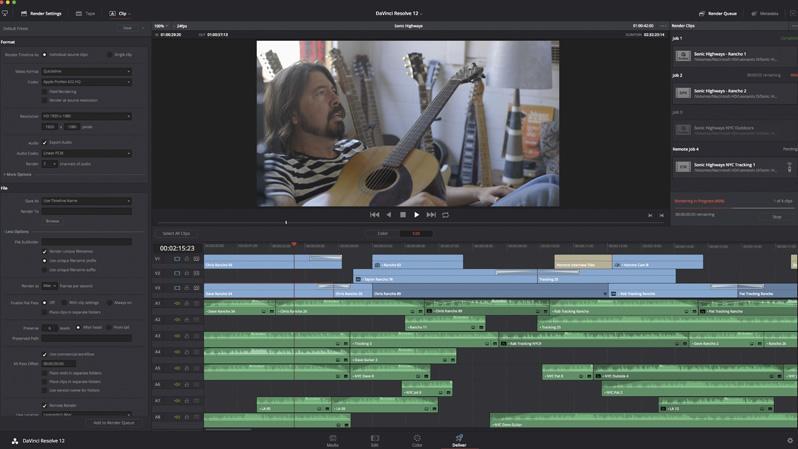 Another marvelous piece of free video editing software, the basic version of DaVinci Resolve 12 was made available for free download in September last year. Blackmagic Design, the company behind DaVinci Resolve, is offering three differently priced versions of the software. The basic version is free to download and use, the Studio version is priced at $995, whereas the most advanced version (which actually includes a hardware video editing panel) would cost you a whooping $29,995.

Now, a free version of a high end piece of software such as DaVinci Resolve would, in most cases, be severely limited feature-wise when compared to the full product. However, in this particular case, the free version covers all of the features that a regular video editing software user would need, and then some. It includes most of the features from the Studio version, including high quality video export in resolutions up to UltraHD.

Compared to something like HitFilm 3 Express, DaVinci Resolve is inferior as an all-in-one tool for animation and video editing. But if video editing and color grading is all you need, then this excellent piece of software will provide an insane amount of firepower completely free of charge. A slightly negative point that we noticed while testing the application, though, is that it takes quite a while for it to open (the startup took up to one minute on our test machine, which is quite a bummer).

To sum it up, the free version of DaVinci Resolve includes tons of high quality professional tools for video editing and color grading, along with a rather decent set of audio processing tools (something that could be very useful if you’re editing demo and/or tutorial videos for YouTube). It is absolutely fantastic for video editing and color grading, and not that great for any sort of animation apart from basic transitions and animated titles.

Blender is an open source software suite that is primarily intended for 3D animation. It can, however, also be used as a very powerful and versatile non-linear video editor, although the truth is that the workflow will probably be a bit too complicated for most users. There are, however, several custom keyboard shortcut setting files that are floating around the web that can make the program a bit easier to use for newcomers. 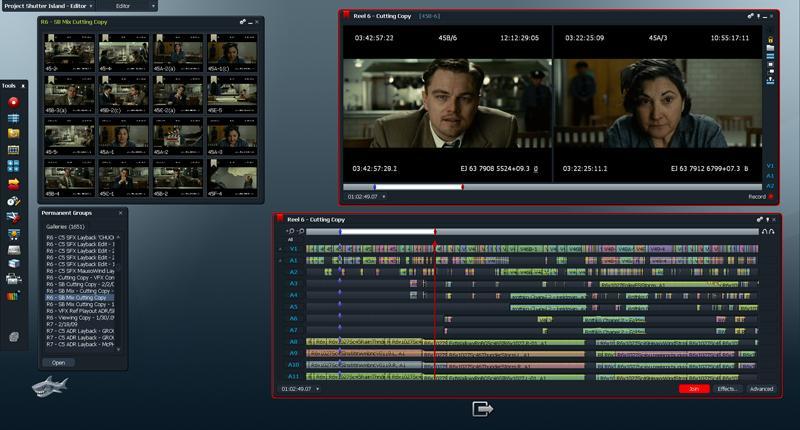 Prior to the release of HitFilm 3 Express, Lightworks used to be my #1 pick in the category of free video editing software. It’s a professional non-linear video editing application which became open source in 2011. Lightworks is not the easiest video editor to learn, but it’s definitely worth investing some time into. I mean, some of my favorite movies were edited on Lightworks (even some Oscar award-winning titles like Mission Impossible, The Departed, Pulp Fiction, and more)! Sadly, the free version of the software has some significant limitations, such as the maximum export resolution of only 720p.

The free “LE” version of ivsEdits is a very powerful non-linear video editor with 4K support and exporting to uncompressed AVI/MOV formats. It does come with a set of limitations compared to the full version of the software, however most of these limitations can be overcome by using various 3rd party freeware utilities. For example, while ivsEdits LE won’t let you export compressed footage directly from the app, you could always use a freeware program such as Handbrake in order to compress your video afterwards.

Shotcut is a free (open source) video editor for Windows, Mac OS and Linux. Although it’s not as advanced as some of the higher ranked programs entries on this list, the simplicity and ease of use is definitely something that a fair share of users will appreciate. A great entry-level non-linear editor for beginners and users who don’t like their video editing software too advanced or complicated.

Another good free video editing tool is Avid Free DV, which was a freeware version of the professional Avid video editor. After Avid bought Pinnacle, they dropped support for this great little non-linear video editor. However, it is still available for free download via digitalFAQ. The software is a bit dated, but it’s still a pretty decent video editor with good workflow and all the basic features you may need, especially if you’re using an older computer to edit video. 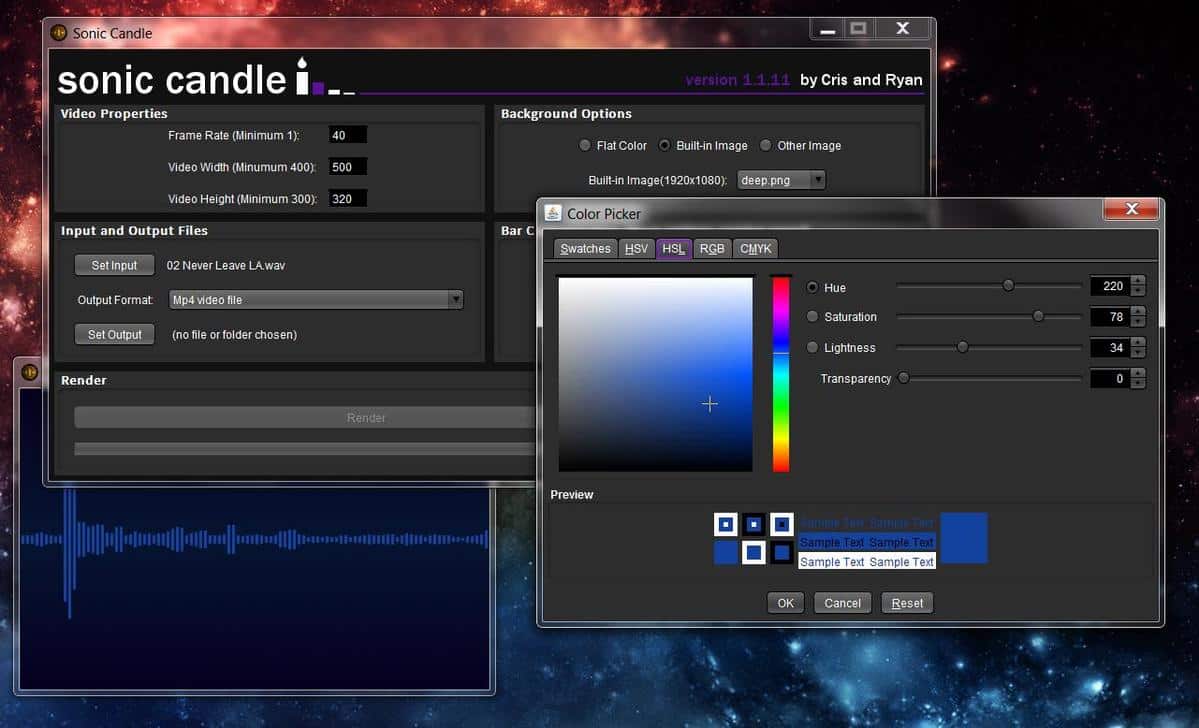 If you need the simplest possible tool to make an animated spectrum video for a piece of audio, look no further than the excellent Sonic Candle application by Ryan Schroeder. Using this program is as easy as loading an audio file into it, adding a background image, choosing the color scheme and exporting the video which is ready for upload to YouTube. And the final result looks very nice indeed!

Here are some additional free video editors that are also worth checking out:

And that’s all we had in store for this article. If there’s a free video editor that isn’t yet included in the list, please let me know in the comments section below. Thanks for reading BPB and happy video editing!