That Sound’s new DrumLine library ($35 for samples or loops, $45 for both, deluxe edition including both plus sampler mappings is $55 with a $45 intro price) is one of the more unusual drum libraries. It contains multi-samples and loops of a drumline.

So, what’s a drumline, anyway? Not all producers are familiar with drumlines, but it’s basically marching percussion. Even though marching drums are found in military and other marching bands all over the world, this type of drumline is something our American readers will be more familiar with from high school and university sports events. The specific drumline recorded here is from the Music City Mystique ensemble from Nashville, Tennessee, which is not associated with any school or university and which has won seven world championships in this sort of thing (yes, there are world championships in this sort of thing).

Only the drumline (the marching part) is sampled, the front ensemble (non-marching percussion, such as xylophones) is not. The sampled drums here include five bass drums of various sizes, four snares, two sets of tenor drums (sort of like toms), and two cymbals. The basses, snares, tenors and cymbals are each recorded as a group, with many parts played by multiple people in unison, though the bass drums are also sampled individually. So, this is an ensemble drum library, something you usually see in taikos and other epic and cinematic drum libraries. However, DrumLine is not all about sounding epic – it’s very suitable for pop, hip-hop and EDM, and there’s no huge baked-in reverb or distant mic perspectives.

There are over 1,500 WAV files of various drum hits here. If there’s one thing these samples are about, it’s variety of techniques. That’s the nature of marching percussion – because most of the drums have one person to play them, there are many more articulations for each type of drum than you’d have in a typical drum kit where you have one person for many kit pieces. This library has the greatest variety of rim clicks and cross sticks that I’ve ever run across, and there are even some shell clicks. There are also flams, rolls, various cymbal techniques (including tempo-synced chokes) and many of the drums are recorded with various types of sticks. Everything has four round robins, and the number of velocity layers varies from one to three. The samples are very consistent, especially the dynamics between the different round robins. Having four round robins with one clearly louder or quieter than the others is extremely annoying, but there’s no danger of that here.

The pieces don’t quite sound like their drum kit equivalents, being generally quite tightly tuned. They can be used in combination with your favorite acoustic drum kit library if you do want to use some conventional kicks etc. Many drumlines perform with a front ensemble which includes a drum kit, so it’s not a “wrong” combination. While you can use these samples and a bit of humanization to create drumline or military style parts which sound quite authentic, my favorite way to use them is to combine them with some classic electronic kicks and maybe a clap or a more typical snare, and make hip hop or house loops from the combination. Playing with the tuning and shortening the decay of the sounds to make them unrealistically tight is really fun, and lets you fit a lot of very varied percussion layers into a track without making a mess. This is where all those rim clicks and very tightly tuned tenor drums can be used to create really unusual beats. And because most of the drum hits are recorded as a group in stereo, they are wide and will automatically give your beat a nice stereo image. If you like to layer percussion, here the layering is already done for you. 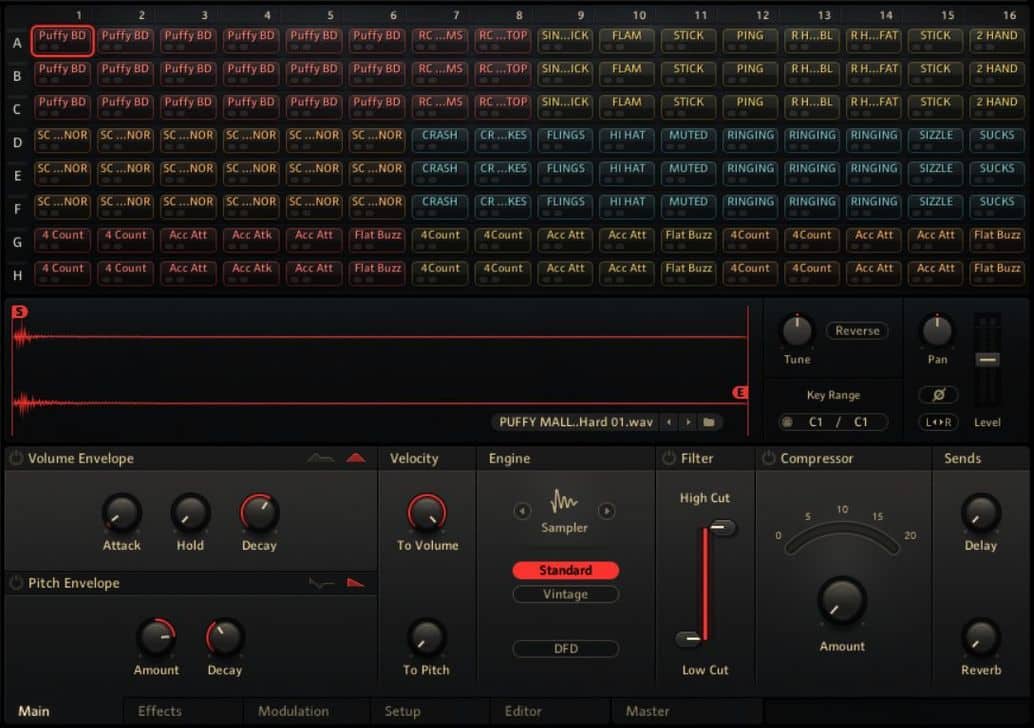 Since the WAV samples are unlocked and clearly labeled (though some of the nomenclature is not obvious – there are “spock” drums and a “sucks” cymbal technique), you can also map them in any sampler of your choice or use them as one-shots. The Deluxe edition adds mappings for Maschine 2, Battery 4, Ableton, EXS24 and Propellerhead Reason. I tested the Battery mappings, and the huge variety of techniques used here means that all articulations for the entire drumline will not fit in one mapping. There are two whole-drumline mappings which skip some stuff, plus also separate mappings for each group. If you want to program a complex and realistic drumline part, a few instances of Battery would work better than just one.

While the hits can be used to program a realistic drumline part, if you just want Drumline to sound like a drumline then the loops are the easier way to go. Eighteen “songs” are included in tempos ranging from 80 to 160 bpm. Each song includes a few variations on the full ensemble performance, plus each group’s part split into sections – so variations and fills are separate. All that adds up to over 400 files. All the loops are in REX format with slice points marked, to make it easy to cut them up and recombine them, or even make drumline breakbeats. There are also some extra loops of bass drum rolls and snare rolls, with the snare rolls being only at 120 and 130 BPM. These loops very much have an archetypal sound that will make you think of halftime shows at NCAA football games, if you’ve ever been to one. If you haven’t, well, it’s basically an elaborate form of marching music. Not dance music and not prog-rock.

Assuming that, like most of us, you’re not producing university fight songs or Rachel Platten’s “Fight Song”, what can you use these loops for? The full performances are a nice way to give a refain an extra lift and an unusual character. If you use the group loops, it’s very easy to fit them into many styles as an interesting form of miscellaneous percussion, especially the fills and rolls. This is similar to the ways that the samples can be used but the loops are more organic and human, and the samples can be used to program more electronic-sounding and robotically precise beats.

With added reverb (as there are no distant mic perspectives), the loops can get quite epic, too, especially if you play with the tuning of a few of the groups and make it a bit lower. Again, the fact that these are recorded in groups complete with a stereo image is great, because it makes the drums nice and wide. The grooves are quite varied, too, so if you’re the kind of person who likes to write tracks by improvising over a loop, they can provide inspiration for all sorts of tracks that you’d never come up with if you started with loops in a more common drumming style.

DrumLine is an unusual sample library, and it’s not something you can just use like a regular drum kit to provide all the drum sounds in most tracks. Think of it as a “spice” drum library rather than “bread and butter”. It can sometimes be used as a main ingredient in a track, but its greatest strength is being combined with other drums to add some great flavor.

DrumLine is a "spice" drum library rather than "bread and butter". It can sometimes be used as a main ingredient in a track, but its greatest strength is being combined with other drums to add some great flavor.