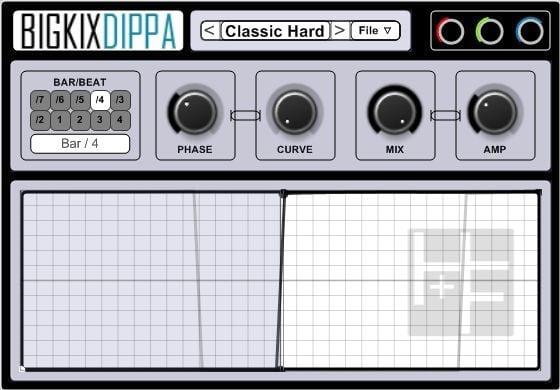 Hinton & Fairchild have announced the release of BIGKIXDIPPA, a freeware volume modulation effect which can be used as a fake side-chain compressor in the manner of Kickstart by Nicky Romero (which was actually developed by Cableguys).

So, the idea behind BIGKIXDIPPA is to control the volume of the processed audio signal by drawing a curve which will be applied to the signal’s amplitude. This method can be used to emulate the classic pumping sound which is usually achieved by triggering a side-chain compressor with a kick drum on each beat in modern four on the floor arrangements. But the plugin can definitely do more than just that, since you are free to draw pretty much any kind of curve you want and the plugin can also follow different time signatures.

As far as I know, this is the first freeware plugin of its kind (please correct me if I’m wrong!). The only freeware alternative to commercial plugins such as VolumeShaper 3 and Kickstart was TAL-Filter-2 by Togu Audio Line, but that’s a filter plugin and it also doesn’t feature the nifty signal phase control found in BIGKIXDIPPA.

Speaking of which, BIGKIXDIPPA also features a handy curve control knob which can be used to increase or decrease the slope of your custom curve, as well as a dry/wet knob which can be used to mix the processed and unprocessed signal before it hits the output. The signal phase parameter is my favorite feature though, because it’s a quick and easy way to add a bit of swing to your fake sidechain and a nice amount of groove to a track.

These guys are on fire at the moment, releasing three incredibly cool freeware VST plugins in less than a month. If you’ve somehow managed to miss their previous two freebie releases (BIGROOMKIXSYNTH kick drum generator and FMetal lead synthesizer), you should definitely take a look! These three plugins work very well in tandem, as you can hear in the official demo video which is embedded below.

I’m quite eager to see what Hinton & Fairchild will come up with next! In the meanwhile, visit their website if you’d like to support their efforts and use the link below to download your free copy of the plugin (Bedroom Producers Blog is hosting the plugin with permission from Hinton & Fairchild).

Check out the BIGKIXDIPPA demo video: