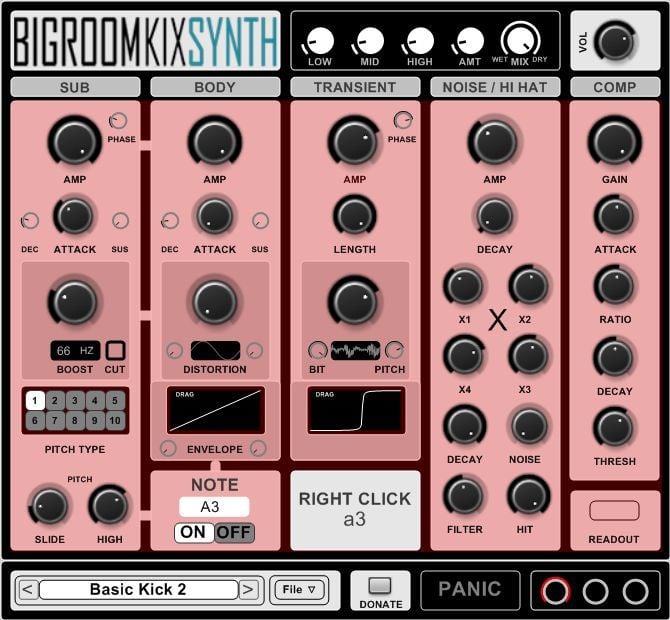 BIGROOMKIX SYNTH is a VSTi specifically created for making Kick Drums and Bass Drums. Unlike the competition, this is a true Synth, it uses no samples only 100% synthesis to achieve a thick meaty UMPH to your track with ultimate control to the sound.

The instrument is completely based on synthesis, meaning that you can use it to build your kick drums from scratch without any need for samples. The current version of the plugin comes with 120 factory presets which are very well programmed, so you can either pick one and use it in a track right away, or use one as a starting point for your own customized kick drum.

The synthesis engine is divided into four different modules which are mixed together before hitting the compressor and then reaching the output. The user has complete control over the following four layers:

Each module comes with standard volume and envelope attack controls. The other parameters vary from module to module, depending on the functionality and the type of sound it generates. The master compressor features standard envelope and gain controls and it works great for rounding up the kick drum and making all the layers fit well together.

Some of the additional features include a nifty drum pad which you can activate with a right click in order to preview your sound while working on it, along with a root note setting which can also be locked to a single note. It’s also possible to change the GUI color for each preset, which is a fun touch.

I’ve tested the plugin in MuLab and it performed flawlessly. No performance hiccups at all, the CPU hit is reasonably small and the plugin was completely stable during my test run. I’ve browsed through all of the factory presets and most of them sound very nice. Adding to that, they’re named in a manner which allows you to find exactly what you’re looking for without too much second guessing.

UPDATE: The instrument is now hosted on BPB with kind permission of the development team. Visit their official website if you’d like to show support for their efforts!

Randomization for the Noise/Hat X Knobs.

Hold left shift for fine control over the Knob values.

Check out the BIGROOMKIXSYNTH demo video: