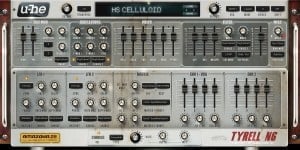 Amazona.de and u-he have released Tyrell N6 V3, an updated and slightly improved version of one of the best freeware VSTi/AU synthesizers currently available.

Not only the large manufacturers and distributors have to report news – AMAZONA.de and U-HE bring you a synthesizer plug-in that has it all!

Tyrell N6 V3 is available for free download via Amazona.de (8.1MB download size, 32-bit & 64-bit VSTi/AU plugin format for Windows & Mac). Scroll all the way down the page to get the download links.

The new version of Tyrell N6 doesn’t bring any new features, but instead introduces a 64-bit version for Mac users and a VST3 version for both Windows and Mac. It also implements around 20 bug fixes and a brand new GUI!

Speaking of the GUI, it was designed by Ryo Ishido, who was interviewed by Amazona.de not so long ago. Needless to say, I love the new GUI. Much, much better than the Tyrell N6 V2 design fiasco (which was made up for by several very good 3rd party skins, btw).

Even though Tyrell N6 V3 doesn’t bring any exciting new features, I’m very glad to see this update released. This amazing synth is now virtually bug-free and I’m sure that Mac users will appreciate the release of the 64-bit version for their system.