As explained in that article, most Kontakt libraries will only work in demo mode in the free Kontakt Player plugin.

If you’ve just installed the Kontakt Player plugin, this page is the best place to find free Kontakt libraries to download.

The libraries listed here will not work in demo mode in Kontakt Player, and there is no fifteen-minute time limit. You can use them for as long as you need, completely free of charge.

Here is the list of free libraries for Kontakt Player:

Find more information about each Kontakt library below. You can also learn how to install third-party Kontakt libraries and how to get a Kontakt crossgrade. 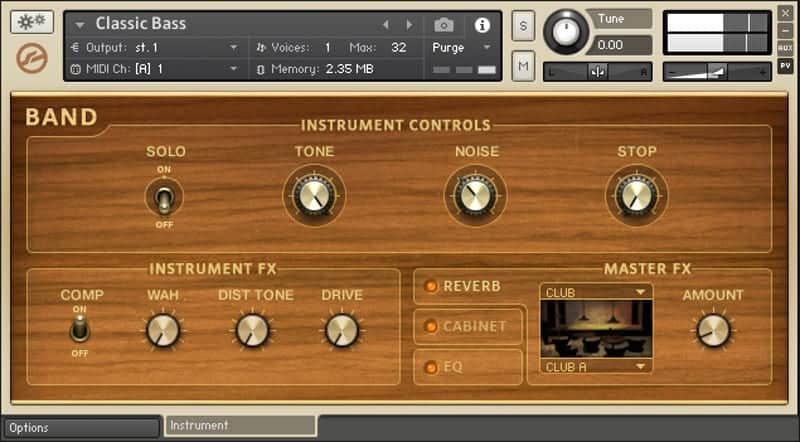 I’m stating the obvious here, but you can’t write about free Kontakt libraries without mentioning the Kontakt Factory Selection.

If you’re just starting out with music production, this (in tandem with the Kontakt Player plugin) is one of the first items to add to your digital audio workstation. Available for free download from Native Instruments as part of the Komplete Start bundle, it delivers a versatile set of sampled instrument sounds.

You’ll get the bread and butter stuff like acoustic pianos, organs, acoustic drums, electric guitars, and even some decent-sounding bass guitars. You’ll also find a handy set of synthesizer samples, drum machine loops, electric pianos, as well as a collection of sampled world and ethnic instruments.

Actually, my favorite part of the Kontakt Factory Selection is the African percussion patch that is perfect for building percussive loops. 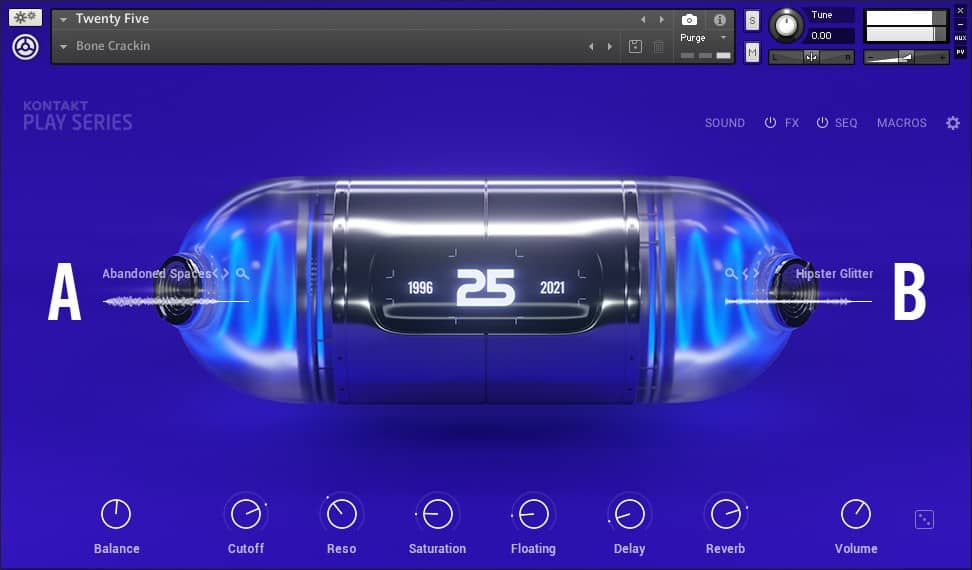 Twenty Five is an epic free Kontakt library that Native Instruments released in celebration of their 25th anniversary. The library includes 150 unique presets sampled from some of the company’s most iconic products like FM8, Absynth, Massive, and others.

The library is perfect if you’re looking for synthesized sounds, cinematic tones, and sampled instruments. It covers everything from bass sounds to pianos and soundscapes.

The instrument’s front panel lets you adjust the filter, saturation, delay, and reverb. Access the advanced control panel to control the built-in sequencer and manage the macro controls.

Twenty Five is a rather large 2.5 GB download, but that’s understandable since it contains over 100 multi-sampled instrument patches. 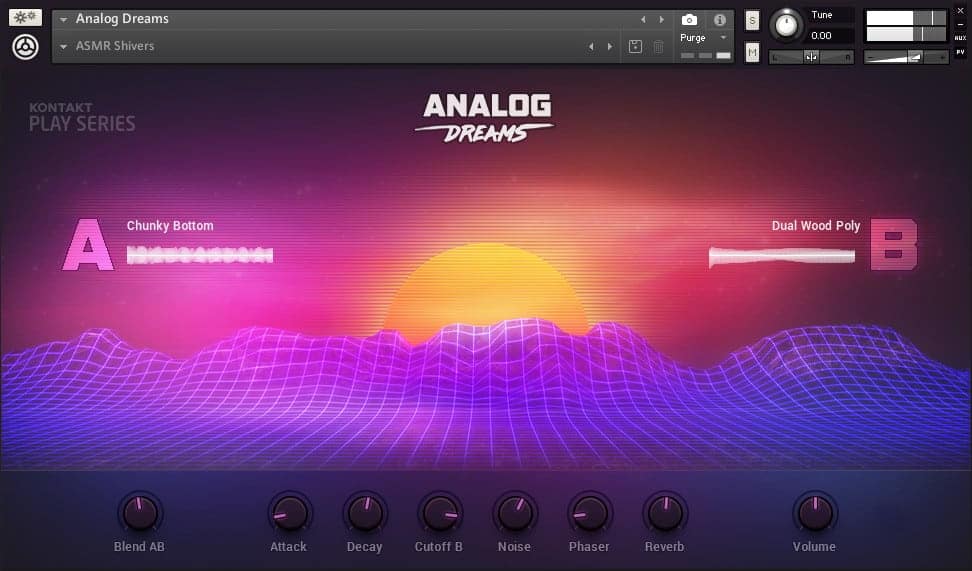 As we already mentioned, the easiest way to get Kontakt Play Selection is to add the Komplete Start bundle to your Native Instruments account. You can then use the Native Access license manager to download and install the library. 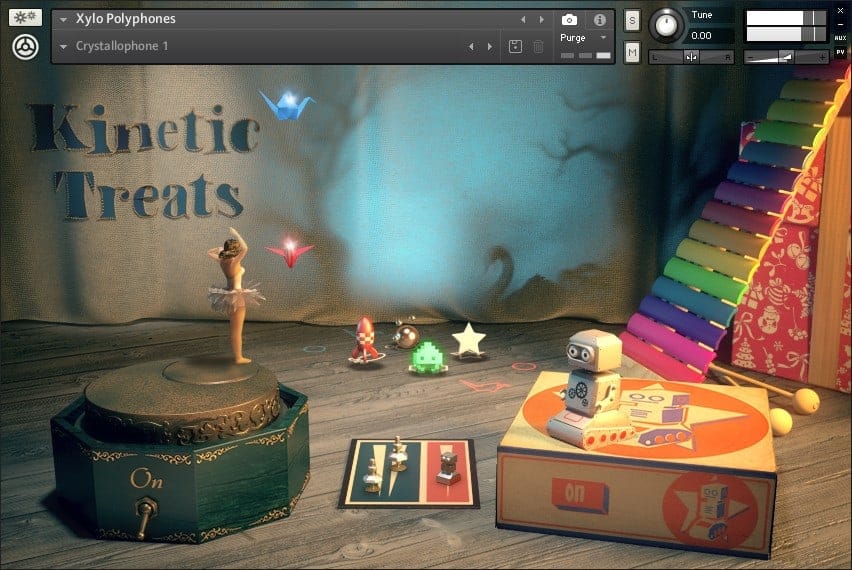 The third free Kontakt library by Native Instruments is called Kinetic Treats. It is based on a collection of toy samples. The sampled source sounds were used to create more complex patches with the help of some clever processing powered by the Kontakt engine.

The product page on Native Instruments’ website describes it as a tool to “Create evolving sounds and textures from a library of carefully sampled children’s toys.” 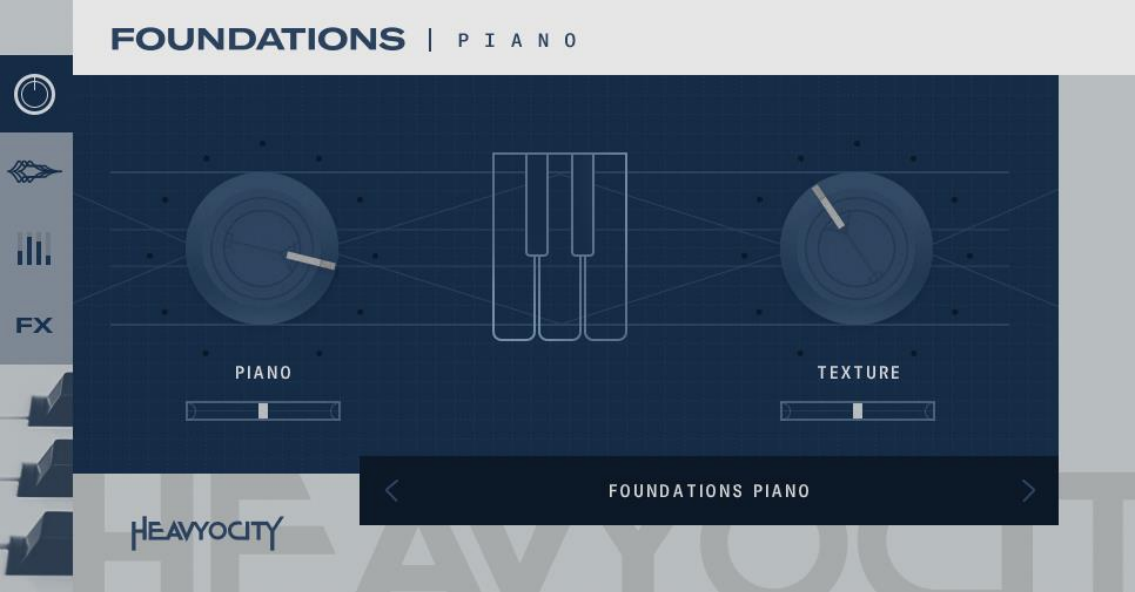 Foundations Piano is a free cinematic Kontakt library by Heavyocity. It deeply samples the subtle dynamics of a Kawai grand piano and combines it with a creative sound design layer for added depth and texture.

The library comes with a wide selection of presets that showcase the available creative textures and their emotional range. Users can freely customize the piano’s sound with various sound-shaping features such as the Arp, an ADSR Amp Envelope, and a built-in FX section, including Gate and Space.

Foundations Piano unleashes its full potential when used as a Kontakt library for media composition (film/game). It’s an expressive cinematic instrument that can suggest hope, loss, reflection, fear, joy, and most other emotions. 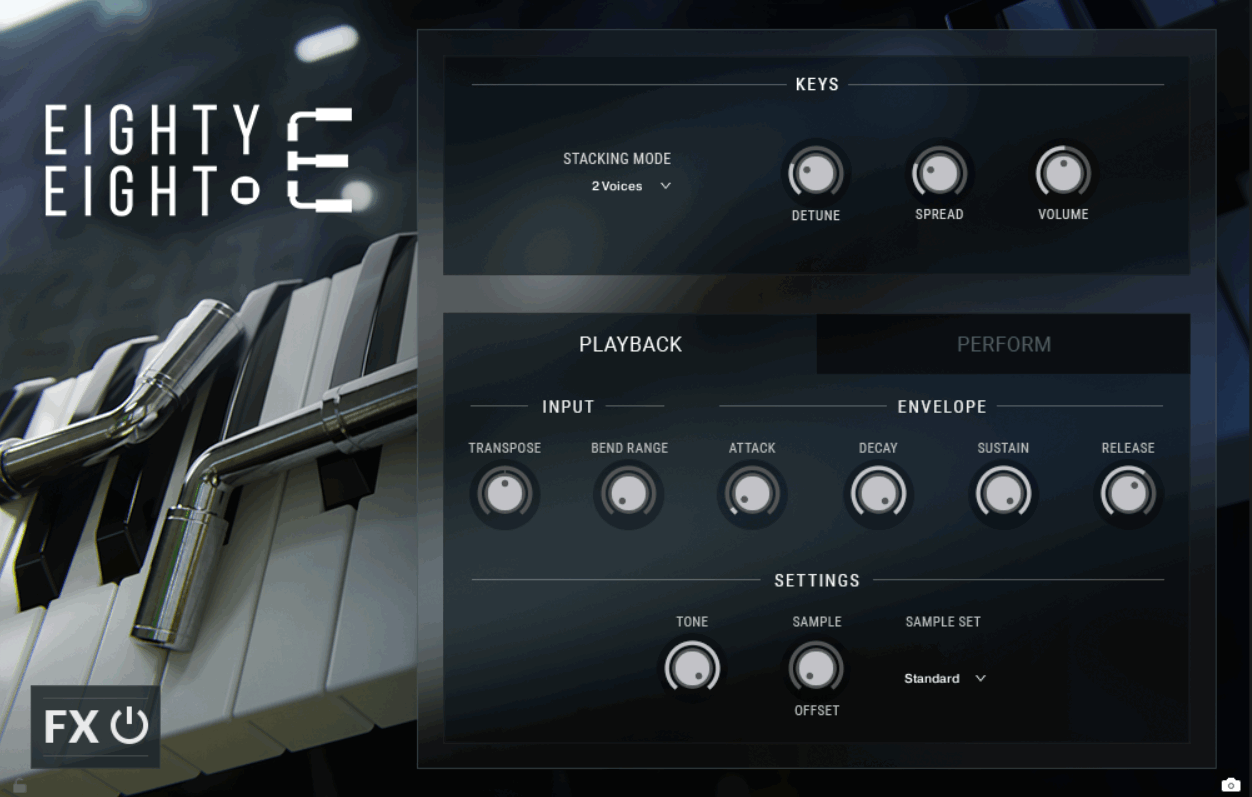 The 88E is a free experimental piano library for Kontakt Player. It is based on an idea by Mattias Krantz, who tuned every piano note to E and then used a giant cover to press all piano keys at the same time (playing the same note).

Impact Soundworks used a similar concept for The 88E library, but with a more flexible approach. This virtual piano can play other notes, too, and comes with various adjustments. You can customize the envelope, transpose the keys, apply pitch bending, change the microphone position, and more.

This free Kontakt library comes with a variety of snapshots that showcase the instrument’s versatility. Impact Soundworks provided a wide range of options, from short plucks and keys to huge atmospheric soundscapes. 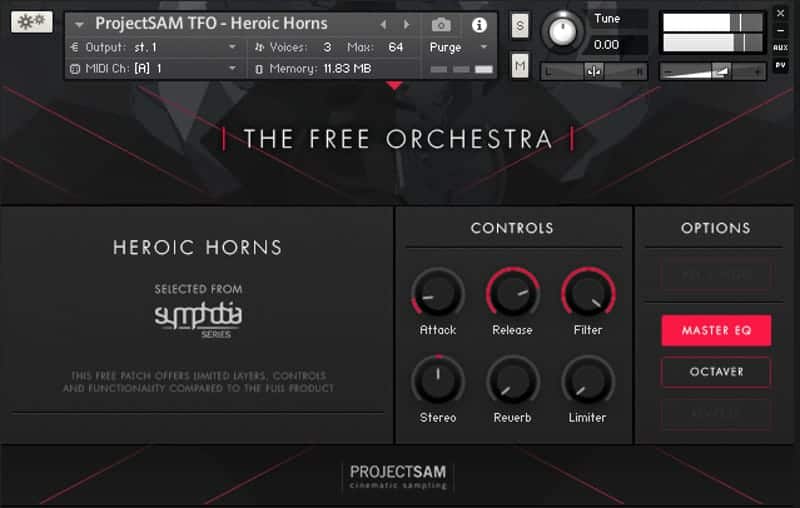 The Free Orchestra is a collection of cinematic orchestral samples for the free Kontakt Player plugin. The sounds were handpicked directly from ProjectSAM’s best-selling orchestra libraries.

The library was free for a while, but a recent update introduced Kontakt Player compatibility. This means that you can simply install it and use it with the free Kontakt Player plugin without any workflow restrictions.

ProjectSAM states that composers are welcome to use The Free Orchestra in commercial projects, too.

The Free Orchestra comes with a customized user interface for Kontakt Player. It provides a limited set of on-screen controls for the most essential sound engine parameters and performance options.

You can quickly fine-tune the volume envelope, the filter, sample reverse, and the built-in effects. The user can also choose whether the dynamics are controlled by the modulation wheel or note velocity. 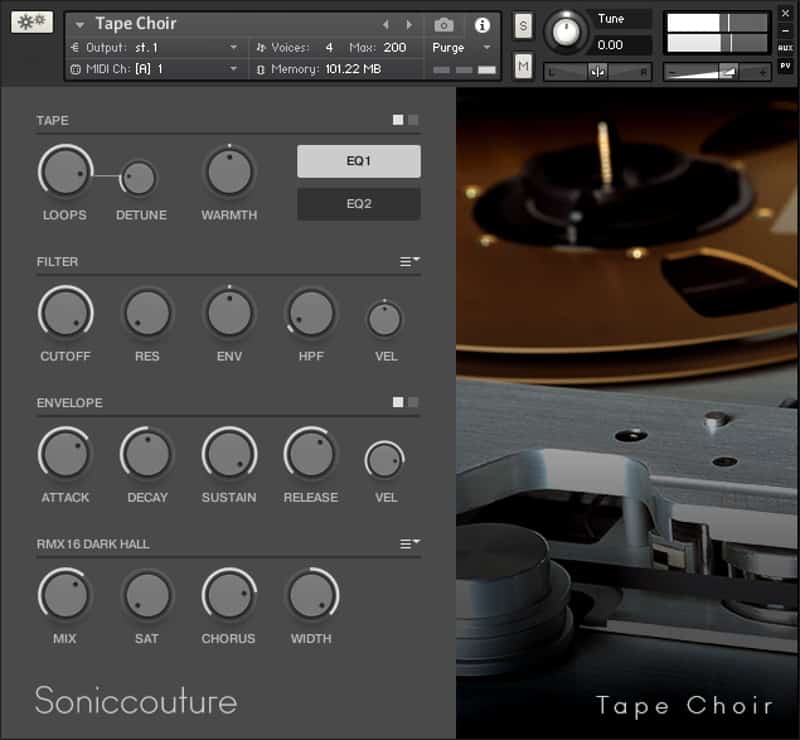 Soniccouture is offering a selection of free Kontakt libraries in the Free Stuff section of their website. After signing up for a free Soniccouture account, new users will receive the serial numbers required for library activation in Native Access.

The cool thing about Soniccouture freebies for Kontakt Player is their focus on unusual sound sources.

The sampled instruments sound very musical but also quite odd and original. Soniccouture’s free Kontakt libraries are a great way to expand your existing sonic arsenal with unique and inspiring new sounds. 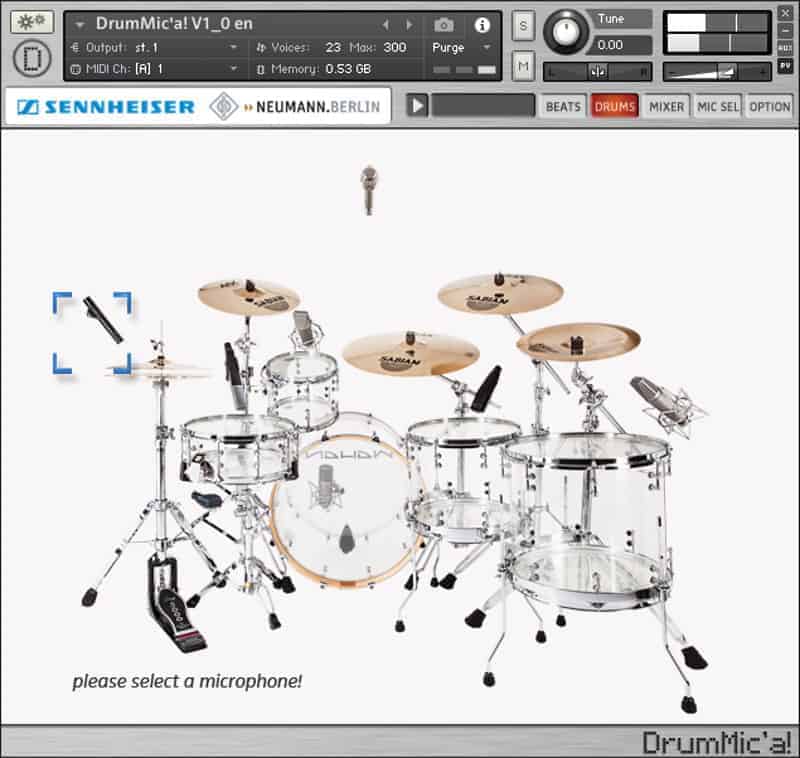 DrumMic’a is a free acoustic drum kit library for Kontakt Player. The library contains over 13,000 individual drum kits, with multiple round-robin variations and dynamic layers for each sampled drum. You also get a fully customized user interface for Kontakt Player.

The interface features a fully-fledged virtual mixer with volume, pan, and FX controls for each drum channel. Additionally, the user can customize the instrument’s velocity response and the MIDI mapping for easy integration into any controller setup.

As for the sampled drum kit, it’s a highly versatile acoustic drum that can be used for various rock and pop music styles. The drums were recorded using state-of-the-art studio gear, including a range of Neumann microphones. Some of the drum elements offer a choice between multiple microphone models. Hover the mouse over the drum kit photo on the interface to access the microphone selection menu.

In addition to the single drum hits, DrumMic’a also offers a selection of recorded drum grooves. The instrument comes with over 1,300 original drum grooves, including a range of rhythms, fills, and intros. The drum loops are organized into music genre categories for easy browsing.

As far as virtual drum kits go, DrumMic’a is one of the must-have free Kontakt libraries.

UPDATE: The free Kontakt Player version of DrumMic’a by Sennheiser is NO LONGER AVAILABLE. 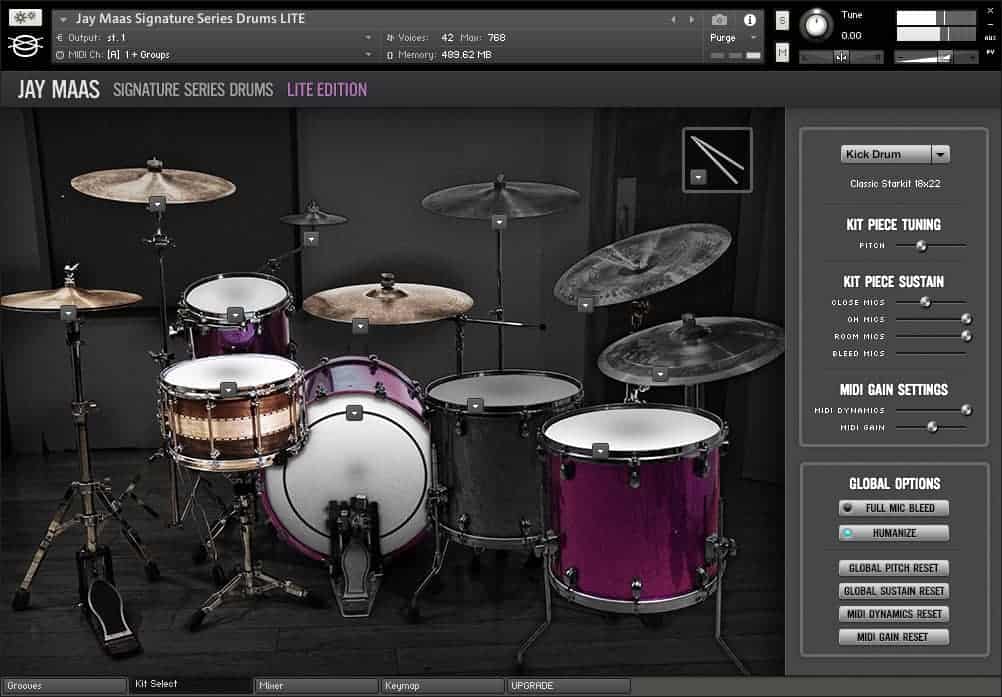 Another free drum kit for Kontakt Player comes from Room Audio. Maas Signature Series Drums LE is the free, lightweight version of Room Audio’s premium acoustic drum collection. Thanks to its modern sound, the recorded drum kit is perfect for use in pop-rock tracks.

The free library contains seven kit pieces (one kick, one snare, two toms, one crash, one ride, and one pair of hats) from the full version of the product.

Keep in mind that the free version of the Jay Maas signature kit only features seven drum kit pieces from the full library. The kit elements that aren’t included are greyed out on the interface. You get one kick, one snare, two toms, and three cymbals. The free library also doesn’t have multi-out support, microphone bleed, and the groove library that comes with the full version of the kit.

Ferrum – Free Edition is the freely downloadable version of Keepforests epic Ferrum sound library. It features a collection of modern trailer percussion sounds, including impacts, metal foley, cymbals, and more. It is an excellent instrument for creating cinematic percussion loops.

Even though the free edition of Ferrum contains a smaller set of samples compared to the full library, it’s still worth the download. You’re getting six octaves of free cinematic percussion sounds and a bunch of tools to help you create trailer percussion loops with ease.

One of Ferrum’s most remarkable features is the built-in step sequencer. It can be used to modulate the filter, pan, and pitch for each note, adding interest and groove to the generated loops. 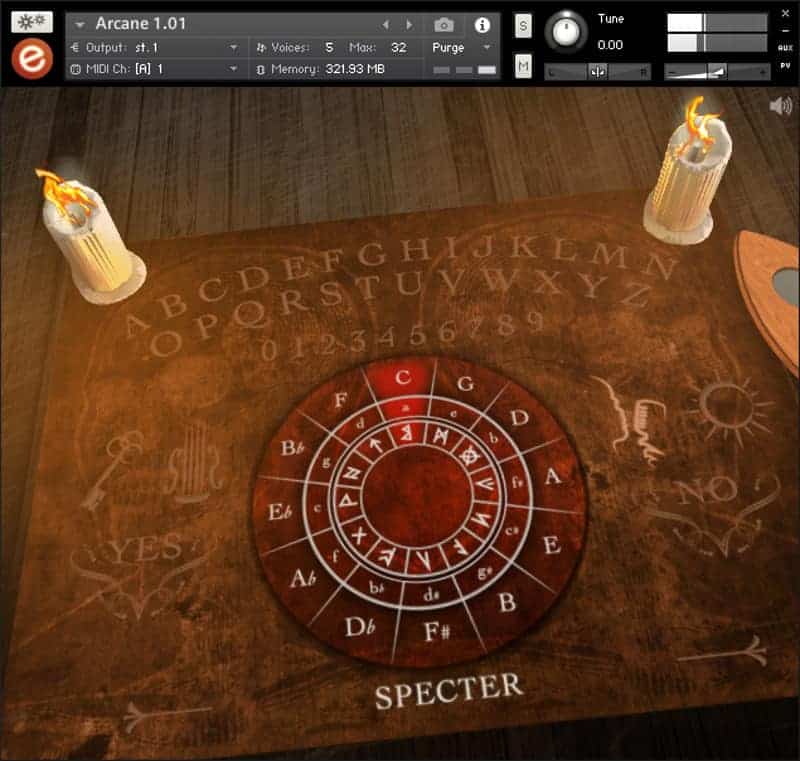 Arcane by Embertone is both a game and a sound library. Fully compatible with Kontakt Player, Arcane will require you to play a puzzle game before accessing its sounds. There are five instruments to unlock and one bonus instrument offered as a prize after all the puzzles have been solved. This bonus instrument is a beautiful alto vocal legato patch that is well worth unlocking.

Don’t be discouraged by Arcane’s unconventional interface design. While it doesn’t look like an instrument on the inside, the library actually features a massive 2 GB+ collection of high-quality samples. Some of the sounds were sourced from Embertone’s commercial products, and some aren’t available anywhere else.

Also, register Arcane to your Native Instruments account, and you will qualify for the Kontakt crossgrade offer (more on later in this article).

SPOILER ALERT: The entire game segment of Arcane can be bypassed by accessing the Individual Patches folder from the Library browser.

Which Are The Best Free Kontakt Libraries?

If you don’t want to install all Kontakt libraries listed here, the free Factory Selection by Native Instruments should be your first choice. It contains a variety of sampled instruments, from pianos and synthesizers to drums and orchestra.

And if you’re looking for orchestra samples, The Free Orchestra is the first Kontakt library you should download. It offers an abundance of sampled instruments for composers of all skill levels.

Here’s a step-by-step guide on how to install Kontakt libraries. The process will vary depending on the library vendor. Regardless you should be able to add free libraries to Kontakt Player by following the steps listed below.

You’re good to go! The installed library should be activated and ready for use in Kontakt Player.

We’ve listed the free Kontakt Player libraries on this page, but there are many other libraries that you can use with the full version of Kontakt.

However, many users stick to the free Kontakt Player because the full version of the software is expensive. Kontakt is priced at €399, and you can usually get a 50% OFF deal during Native Instruments’ annual sales (usually around Christmas and during summer). 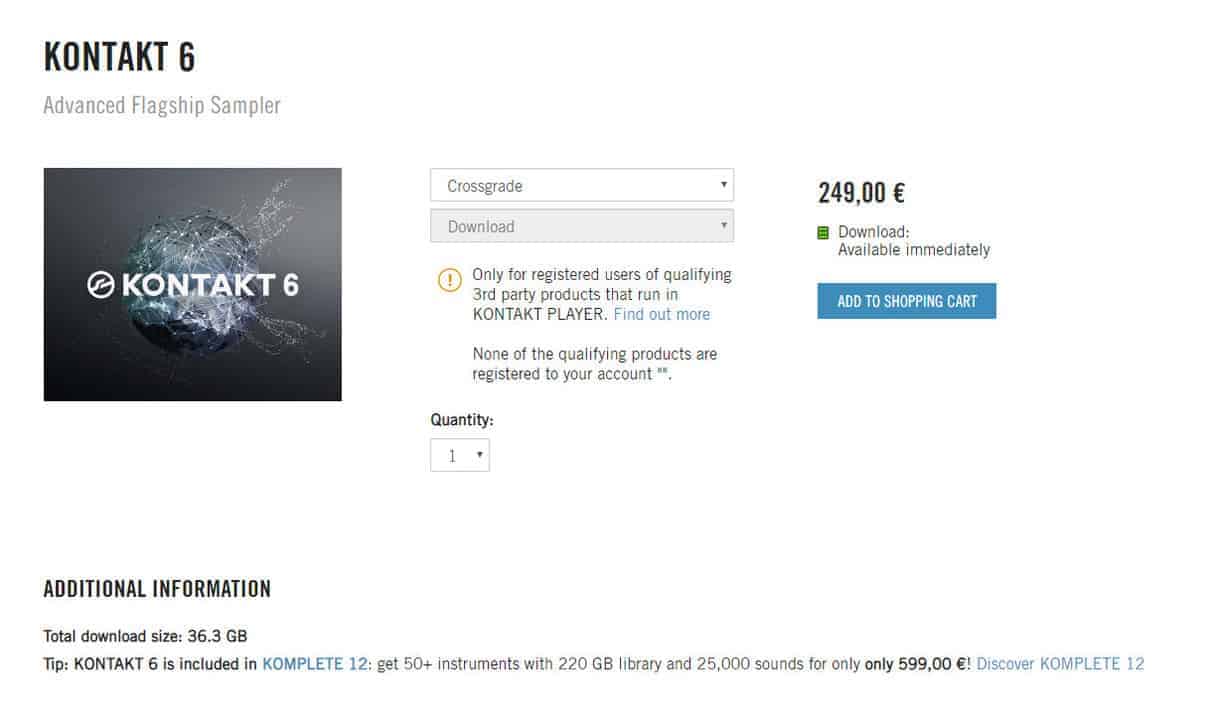 Register and activate a third-party Kontakt Player library to qualify for the Kontakt crossgrade offer.

Luckily, there’s a way to save even more cash when purchasing the full version of Kontakt.

And yes, free third-party libraries also qualify for the crossgrade offer, as long as the library is registered correctly and activated using a valid serial number.

The crossgrade method reportedly works with the Arcane library by Embertone. Multiple users have reported that they could access the Kontakt crossgrade offer as soon as Arcane was added to their Native Instruments account.

That said, the crossgrade should work, in theory, when you register and activate any of the third-party libraries listed on this page. To check if your Native Instrument account qualifies for the Kontakt crossgrade offer, visit the Kontakt 6 pricing page and verify the price.