So, after covering the best free parametric EQs a few weeks ago, now it’s time to find and list the best freeware graphic equalizers in VST plugin format. I don’t use graphic EQs too often, so creating this list was a bit harder than usual.

To provide you with more choices, I’ve included my favorite freeware graphic equalizers, and also the ones I’ve noticed being mentioned more often on music production forums like KVR and Gearslutz. As always, you’re welcome to suggest your favorite free graphic eq in the comments section below, in case I’ve missed it.

Classic EQ is another one I must recommend, it’s a nice lightweight graphic EQ, and can also be used for creating some nice stereo effects.

Free Ranger offers only four bands (40Hz, 150Hz, 1.8kHz, and 16kHz), but I’ve read some nice comments about it, so you can’t go wrong if you download and test it in your setup.

EQ22 is also often praised on forums, it’s a rather old plugin but people seem to like it’s sound alot. 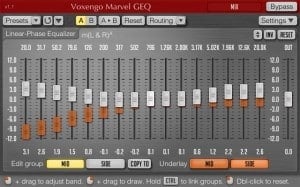 CS12m offers HP and LP filters together with the twelve EQ bands, which makes it usable as an all-in-one channel equalizer for those who like using graphic EQs.

Aqualizer was featured in Music Tech Magazine (although being featured on BPB is way cooler, right?) and it’s source code is also available for download, so it may be interesting for those of you who are into programming.

10EQ is a nice graphic equalizer based on API 560. Many thanks to bpb reader oscar for reminding me of it!

Can’t say much about other plugins in the list, as I haven’t tested all of them yet. If you’ve tried some of the other plugins, you’re welcome to leave your impressions/suggestions in the comments section below. Happy mixing!