After covering numerous free VST plugins so far in our bpb Freeware Studio series (aka Free VST Plugins Directory), now would be the right time to take a look at the best free VST host applications currently available.

Various different types of VST host apps were included in the list, from fairly basic ones useful for plugin testing, to modular DAWs, trackers, and some full-featured live performance hosts.

People often mention Reaper as a free VST host, but please note that Reaper is actually commercial software with a 30-day trial period. Although the actual software installation never expires, you should purchase a licence if you use it longer than 30 days (there is however Reaper v0.999 which is still available for free, many thanks to vian for sharing the info in the comments!).

MuLab FREE is my favorite freeware VST host application. Even with the 4-track limit of the free version, it is still a very powerful modular VST host which will let you create some crazy FX and instrument chains using your favorite VSTs.

Podium Free is without a doubt your best choice if you’re looking for a full-featured freeware DAW. The only serious limitation of the free version is that it uses a single CPU core, but the amount of features available at no cost is simply insane. It is very stable, perfectly designed, and definitely worth checking out (as well as the Pro version). 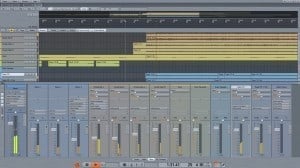 Usine Free, LiveProfessor, Rack Performer, VstBoard and Cantabile Lite are VST hosts suitable for live use, Usine currently being the most popular one.

Psycle is a free tracker which also works as a VST host. I must admit i’m not very experienced with trackers, but I know there are many people who don’t use sequencers at all and go for trackers instead, so this one’s for them.

SAVIHost, MiniHost and VSTHost are lightweight and easy to use VST host applications, perfect for quickly testing new VST plugins.

KRISTAL Audio Engine is an interesting 16-track sequencer which can load VST effects, but unfortunately doesn’t support MIDI, hence no VST instruments can be used.

Feel free to leave comments suggesting other free VST host applications I may have missed and I’ll include them in the list.

Many thanks to Ronnie for suggesting LMMS, a free cross-platform VST host application which is a great alternative to commercial loop-based programs like FL Studio, Greg for suggesting Jeskola Buzz and DarkWave Studio, two pretty awesome free VST hosts (and also Scooty!), bonzo for suggesting OpenMPT, Alex_HS for suggesting Macaw, and gropkcor for suggesting Rax’n’Trax! Finally, a big thank you to satt for suggesting Tunafish, a lovely old school sequencer!