For many years, AIR Music Technology (once known as Wizoo) has supplied factory instruments and effects for Avid’s Pro-Tools industry standard DAW, but now that their innovative product line has become available to 3rd party users, an already-competitive marketplace just got a little more competitive.

AIR’s flagship power-synth Hybrid 3 hit shelves last April, making a name for itself among its ambitious counterparts – many of which need no introduction – but what I really admire about Hybrid 3 is the way it dips its toes into various synthesis types and techniques without burying users under an avalanche of features, even though Hybrid 3 definitely has no shortage of them.

Fresh out of the box, Hybrid 3 comes stocked with a massive arsenal of 1200+ presets with over twenty categories spanning a wide range of musical genres, split up into separate folders (including the factory library from version 2.0) featuring cutting edge, high-definition sounds from beautiful ambient pads, EDM leads, stabs, aggressive wobbles and thunderous bass lines that will evoke gleeful tears of joy. Seriously, this is the most impressive factory patch library I’ve ever laid ears on. The sounds are extraordinary, and instantly usable.

One of the first things you’ll notice is that Hybrid 3 has two completely separate synthesizer cores split up into Parts A and B, which can be combined in several ways, such as spreading your sounds apart in the stereo field, or maybe you want to split the keyboard to use separate instruments at once in live performance situations or recording sessions.

Another really cool feature is the Presets page, accessible via the “Part Presets” tab within the Setup Section near the top of the screen, where you can select presets for each Part to create your own layers or reverse-engineer existing presets and design your own sounds later on.

Within each synthesizer Part, there are three oscillators lined up in a row. The first two have options for multiple waveforms and a Shape control which is used to apply various synthesis techniques including cross modulation, pulse width modulation, sync effects, Multi (unison) waveforms ideal for supersaws and fat detuned pads, and a hundred wavetables – yes, a hundred of them – ranging from ice-cold crystalline textures to rich, warm piano timbres.

Each oscillator features a “Mod” tab which opens up a modulation matrix sporting context menus for routing an impressive amount of modulation sources (18 to be exact) to the oscillator’s pitch, shape and overall amplitude, with individual Level controls for adjusting the modulation depth.

Speaking of modulation sources, there are three LFOs and a looping envelope which can produce side-chain compression effects, aptly named the “Pumper”, and two modulation envelopes, all of which can be routed to any modulation target within each synth core.

Also, there are two independent filters with a dedicated filter envelope and 23 filter types, from four-pole low-pass to multi-pole band-pass and band-reject combinations that defy classification. The frequency modulation within the filter is a wonderful source of inspiration. You can blend the signal from oscillator 3 with its built-in noise generator, which is especially noticeable when the filter is self-oscillating (given the resonance control is turned all the way up) in order to create detailed chiming sounds or experimental atmospheres bordering on nightmarish extremes.

In the Master section, you will see four individual Morph controls, each belonging to its own “Morph Group”, which you can edit by simply toggling one of four Edit Morph buttons, enabling you to assign parameters and highlight those already assigned – a very quick and efficient means of establishing control over a vast number of parameters with a single knob-turn.

It would be nice to be able to modulate the Morph controls, for “in the box” producers without a mod-wheel, aftertouch or external midi hardware; however, if your DAW features indexing of 3rd party parameters, automating the Morph controls should be a fairly simple and straightforward process, and taking into consideration how many parameters you have control over with just one automation lane, you really can’t complain too much… if at all.

In the Sequencer page, we have even more modulation sources to play with, including Control lanes, which appear as “Seq1” and “Seq2” within the Mod pages, and feature additional Source selectors with bipolar Depth faders, for those of you dying to plug in your midi breath controllers. I’ve yet to go over the sequencer playback options, of which there are a handsome variety, but I was especially impressed by the abundance of options in the settings and performance controls, and the ability to import both factory and 3rd party midi phrases. 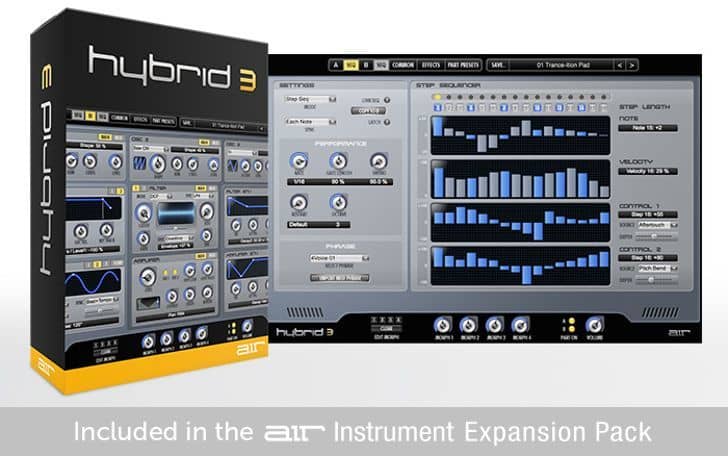 Hybrid 3 is included in the AIR Instrument Expansion Pack.

Unfortunately, there is no polyphonic unison. However, I can just imagine how computationally expensive that would be, considering how much is going on behind the scenes already. So, perhaps a more economic alternative would be a larger selection of Multi waveforms.

I would also like to see Multi Wavetables, but for now, I can only dream of them. Personally, I think the Multi waveform approach is a great concept that we’ll be seeing more of in softsynths of all shapes and sizes later on down the road from many developers. It’s a practical alternative to overly complicated unison engines that devour vital system resources. It just makes sense.

I think there could be a little more inter-connectivity between Parts A & B; for instance, the ability to route both A & B to a single filter, which would save on CPU. There could be a Global Filter in the Common page. Of course, that would involve a considerable adjustment to the near perfect GUI. So, perhaps some sort of routing scheme within the Master section would suffice.

I could go on forever about Hybrid 3, but one thing I can’t stress enough is the way it processes audio. The Hype algorithm features analogue modeling and razor-sharp attenuation of harmonic content, with boosting for low and high frequencies, and doubling for each synth core. In a highly competitive marketplace replete with power-synths, many of which share identical features, so few of them actually sound good. Fortunately, Hybrid 3 is among the latter.

My only regret is that I never got the chance to review Hybrid 3 when it was released last year. However, I’m glad this review is somewhat late to the draw because I truly feel that Hybrid 3 has been slightly overlooked. AIR Music Technology has made some phenomenal instruments over the years and developed a strong following from Avid’s Pro-Tools user base, and now that their products are on the open market, I really think they can look forward to a bright future ahead.

What I really admire about Hybrid 3 is the way it dips its toes into various synthesis types and techniques without burying users under an avalanche of features, even though Hybrid 3 definitely has no shortage of them.