Presonus has released the long awaited new version of their flagship digital audio workstation. Let’s take a closer look at what Studio One 3 has to offer to its loyal user base and potential newcomers.

Before we kick off the Studio One 3 review and dissect the specifics of the application’s latest version, here’s a brief general overview of S1’s previous versions. After its first appearance on the crowded DAW market back in 2009, Studio One quickly gained the reputation of a capable digital audio workstation which is optimized for a fast and hassle-free workflow. Right from the beginning, the app’s main advantages were its incredibly powerful line-up of native effects, a non-cluttered user interface and a refreshingly simple approach to audio and MIDI editing, allowing the users to focus all of their creative energy into songwriting and arranging.

On the other hand, what Studio One had to offer in the native effects department, it sadly lacked when it came to bundled virtual instruments. With no more than three virtual instruments on disposal out of the box, the users had to rely on the power of hardware instruments or 3rd party plugins in order to get the best out of their DAW of choice. Thankfully, it’s all about to change in Studio One 3!

Studio One 3 is a groundbreaking update. The development team at Presonus has successfully fulfilled the most important goal of any software update and that is to expand a program’s feature list without adding bloat and crippling its basic functionality. Studio One 3’s exciting new features such as the Arranger Track, the incredibly useful Scratch Pads and the refreshing approach to audio routing with Extended FX Chains don’t take anything away from the streamlined user experience that the application has been long known for. Quite the contrary, Studio One is now more powerful and flexible than ever, while remaining as user friendly and easy to master as before.

The first set of new features was obviously created with songwriters in mind. Arranger Track and Scratch Pads are there to make a songwriter’s life easier, providing a powerful new set of tools for experimentation with the arrangement and song structure. By activating the Arranger Track, the users can treat different sections of a song as basic patterns which can be copied, rearranged or duplicated like any other pattern on the timeline. There’s no more need to select over 20 different tracks whenever you’d want to extend the intro section or shorten the bridge of your project, as potentially complicated tasks such as these can now be performed in no more than just a few mouse clicks.

Whereas the Arranger Track makes it easier to quickly manipulate different song sections, the Scratch Pads are a revolutionary new feature unique to Studio One 3 which allows the users to experiment and improvise within their project without the fear of messing it up. Scratch Pads are basically virtual sketchbooks within the Song page, where entire sections of the project can be copied for further tweaking and refinement without affecting the main arrangement. In situations where you’d normally want to create a new copy of your project (by using the “Save As” or “Save New Vesion” dialogue), you can now use the Scratch Pads functionality to test your new arrangement ideas within the same project file.

Easy audio routing was one of Studio One’s standout features from the get-go, however Studio One 3 takes things to a whole new level of ease of use and versatility. The new Extended FX Chains feature allows for any combination of serial or parallel effects to be chained within each console channel. The feature is accessed by pressing the Channel Editor button and enabling the Routing View. Once the Routing View is activated, a new pop-up window appears, giving the users access to an all-new flexible chaining environment which can be used to connect Studio One’s native effects and 3rd party plugins in any way imaginable. Perhaps the coolest thing about Extended FX Chains is that the processed audio signal can be split into multiple frequency bands (by setting the Splitter tool to Frequency Split) which can be treated individually with completely different FX chains. It is now possible to build custom multi-band FX chains right inside Studio One’s native mixer. 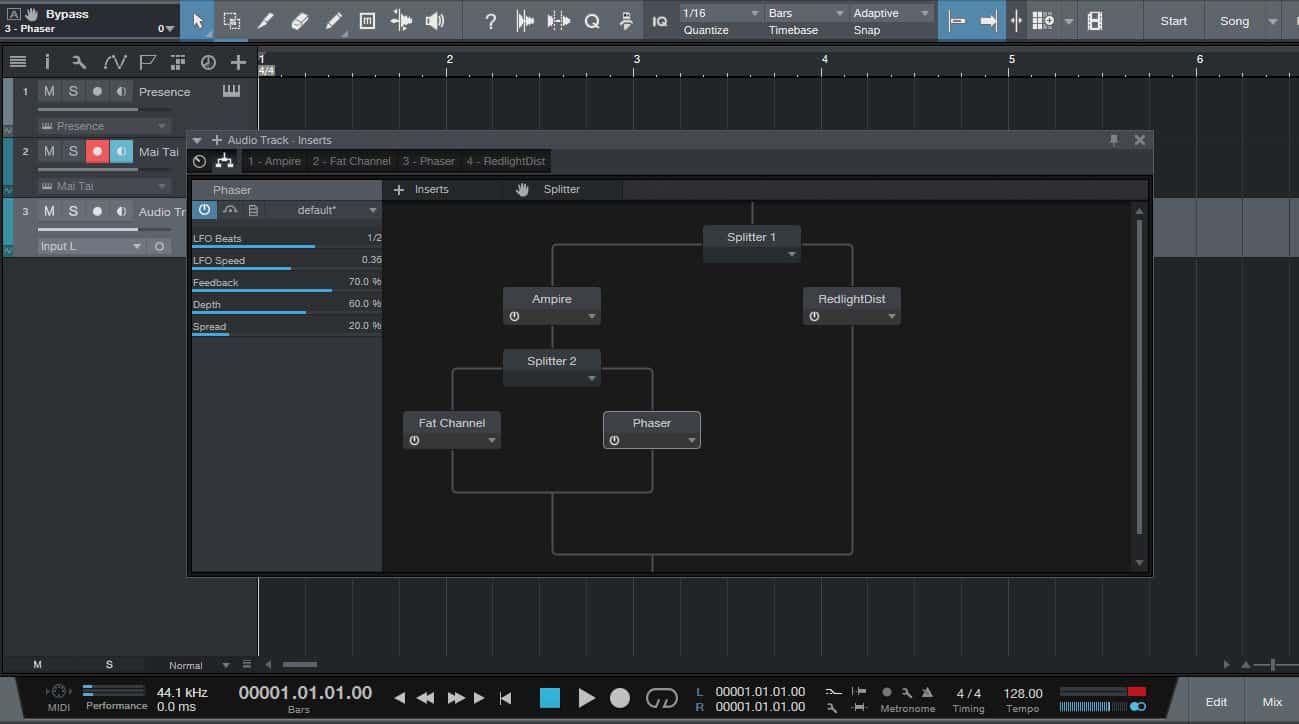 Extended FX Chains in Studio One 3.

The second addition to Studio One’s instrument line-up is Presence XT, an enhanced version of the old Presence sampler. Based on Studio One’s new dynamic synthesis engine (also used in Mai Tai), Presence XT supports disk streaming for larger sized samples and comes with an all-new and great sounding sample library. It’s worth noting that Presence XT is compatible with old Studio One projects, so there will be no reason to worry when transferring your older songs to Studio One 3.

Studio One 3 also includes a couple of new audio effects (a Leslie cabinet emulator and a versatile bitcurusher effect), along with an all-new line up of Note FX – a set of four different tools for processing instrument note data. The new Note FX suite includes a powerful arpeggiator, a chord generator, a repeater and an input note filter. These new note data processing tools, along with the new virtual instruments and Multi-Instruments features, make Studio One 3 a fantastic environment for composing, improvisation and musical experimentation.

Studio One 3 is a huge step forward for Presonus’ flagship digital audio workstation. Despite its late arrival to the DAW marketplace, Studio One keeps improving and gaining popularity among musicians and music producers alike. More powerful and flexible than ever before, with fantastic audio routing capabilities, innovative song arranging tools and a reinforced line-up of virtual instruments, Studio One 3 is a strong contender for the title of the best DAW out there.

A fully functional 30-day trial version can be downloaded for free from the developer’s website. A brand new feature-limited free version called Studio One Prime is scheduled for release in June this year.

A groundbreaking update. More powerful and flexible than ever before, with fantastic audio routing capabilities, innovative song arranging tools and a reinforced line-up of virtual instruments, Studio One 3 is a strong contender for the title of the best DAW on today's market.