Dehumaniser is designed to do exactly what the name says – make human voices sound inhuman, and turn them into monster voices for movies, games, etc.

It’s a very powerful piece of audio FX software that’s not quite like anything else I’ve seen. Finding out what it can be used for has been more interesting than reviewing software where I already had a pretty good idea of what it should be good for before I installed it.

What Does It Do?

Dehumaniser is mostly a multi-effects unit which works as standalone software. There are nine effects, a sampler, and the ability to load two external VST/AU effects. These are not your typical effects such as filters and delays, though. There is a delay, but it also shifts the pitch, so every delayed copy drifts further away in pitch from the original. There’s quite a bit of pitch shifting, actually, with the delay pitch shift effect also joined by poly pitch shifting (up to eight voices, each shifted by a different value), spectral pitch shifting (the signal is split into different amplitude bands and each is shifted differently), and plain old regular pitch shifting (but with two voices, so it’s still more than you’d typically get in a pitch shift effect). There’s also a granular effect which is generally similar to granular delay/pitch effects I’ve seen elsewhere. Cross-synthesis is a convolution effect using impulse responses, similar to what’s also used for reverb or guitar cab simulation, but the impulses included with Dehumaniser include a trumpeting elephant, dogs fighting and a straw squeaking in a glass.

That’s the normal stuff, relatively speaking. Then we get to the weirder effects. The noise generator is not just white noise synthesis, but sounds like it involves distortion, modulation and/or synthesis of extra frequencies applied to a particular frequency band – it can be used to make sounds harsh, or by keeping the frequency low and bandwidth narrow it can also give them a classic sci-fi robot voice sound. Animal convolution runs the sound through a rather complex digital model of vocal cords and a voice tract. I don’t think it’s meant to simulate sweet clear singing or gentle whispers, and it always seems to be simulating a beast in angry mode, whether making low roars or high screeches. Finally, scrubbing convolution plays back the two samples loaded into slots, but rather than playing them from beginning to end, it scrubs across them apparently based on the dynamics of the input signal. I haven’t seen anything like this anywhere else before.

Every effect has its own EQ, and most can also be set to follow the dynamics to various degrees. In addition to these effects, there’s also a sample player and two slots for VST/AU effects. And just in case all of that still seems too much like a multi-effects unit, all these modules are not arranged in series like you’d expect. The default routing is parallel, however the routing is fully configurable with an array.

Loading up some voice recordings and going through the presets, it’s clear that Dehumaniser does what it’s designed to do – makes a normal person talking or growling or moaning sound like any of a variety of monsters, from dinosaurs to robots and even alien clicks and glitches. A lot of the sounds coming out of this sound very familiar, like typical modern movie monsters. Many of the effects are also very responsive to the input – the louder you get, the more unnatural the sound becomes. So, even with extreme effects, the dynamics and emotions in dialogue are preserved and the angry parts sound angrier than the less angry parts. If you’re a producer who also does sound design for video games, this is great.

If you stick to producing music, though, it can also be useful for vocals. I had some female death metal vocals laying around on my hard drive, and Dehumaniser is great at giving those an extra monstrous quality as well. There are many flavors of vocal distortion available, especially for industrial which doesn’t need or want natural-sounding vocals. I can also see it being useful for occasional emphasis in a hip-hop track, or making really weird pre-drop samples or chopped vocals for EDM. A lot of the presets involve a lot of pitch shifting, especially by dissonant intervals, so if you want to apply these effects to vocals in a song, you might have to stick to shifting by consonant intervals. In other words, you’re going to have to make some presets of your own.

I haven’t been able to find any settings which would turn a voice into a choir of angels, though I have managed to use the poly pitch shift as kind of a unique gritty chorus, and the animal convolution to make myself sound sort of like Barry White, if he smoked a lot. It can also make synthesized vocals (such as Daisy) gritty, growly and less robotic (though more bestial than human). I don’t think Dehumaniser is very good at being subtle or sounding pretty, though.

Sure, Dehumaniser is designed as a processor for voices, but I had to try using it on other stuff. It can make just about anything sound monstrous, scary or distorted. Drums, guitars, synths… It’s especially good on unpitched sounds (or if you just don’t care what pitch you end up at), so you don’t have to stick to consonant intervals in all the pitch shift effects. If you do care about pitch, though, the scrubbing convolution has especially massive potential for creative sound design, because if you load samples of notes into its slots (say, some plucked bass notes) you will always get their pitch, no matter what you use for the input, and this can be used to create some really weird wobbly synths. This is one case where I’ve managed to get Dehumaniser to sound nice, subtle and pretty. The spectral pitch shifting also seems especially useful for music, as setting it right can add a nice shimmer to notes.

Still, being nice and subtle is not Dehumaniser’s strength. Mangling things thoroughly and turning them into something else is where it really excels. And given that its purpose is making monster voices, some of the effects, such as animal convolution and cross synthesis, can also give an eerie animal voice quality to sounds such as low piano notes or even simple white noise risers. 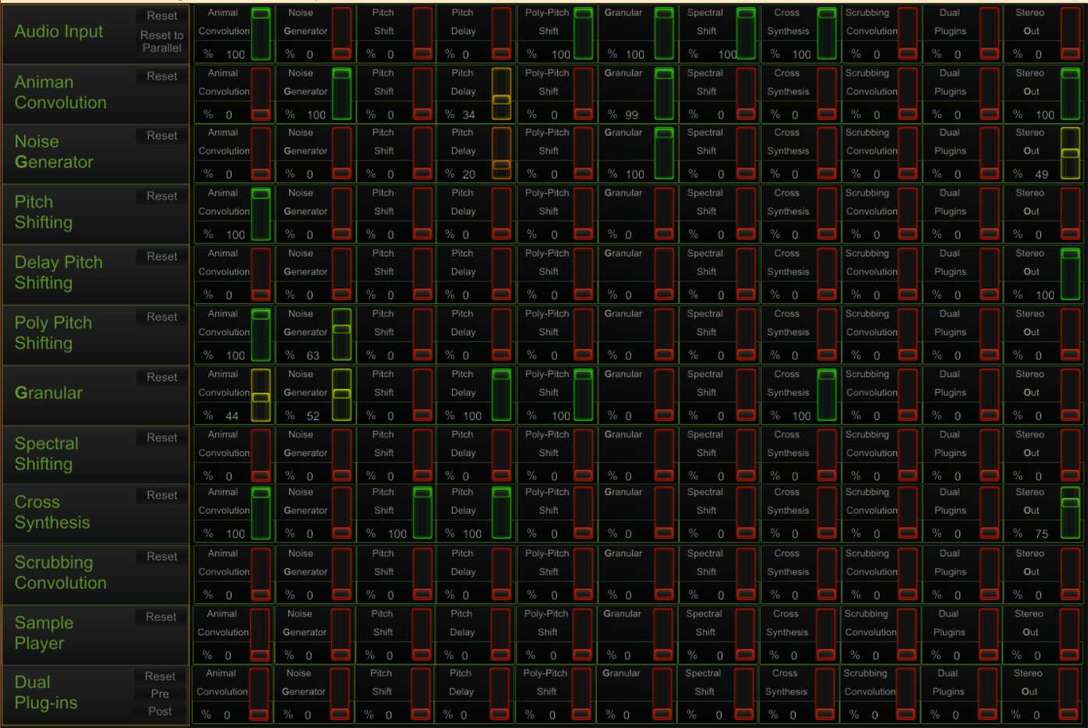 When using it for music, the fact that it’s standalone software does make it less convenient than if it was a plugin or a bundle of separate effect plugins. You can’t just put it on a track in your DAW, apply automation to the parameters or sync the LFOs with the beat. There is also no latency compensation when exporting files, which is not a big deal when processing a backing vocal track, but if you’re doing, say, a hi-hat one-shot, then you’ll have to edit the resulting file and make sure the sound starts at the beginning. Still, the power and uniqueness are worth those inconveniences. If you want to make dark or just plain weird music, you can really go to town on this and make some killer hi-hats, synth growls, glitches and so on. I could really see Dehumaniser catching on among, say, more aggressive drum and bass producers. The potential here is definitely enormous, and if I spent another week before writing this review, it would probably end up twice as long as I discover more possibilities.

Dehumaniser comes in three flavors. The Lite edition (59 GPB) can load presets and morph between them, so it can make a lot of different monster voices, but does not have the level of control to really be useful for music. The Pro version (199 GPB) gives you access to the Advanced screen where you can tweak all the parameter controls and also control the routing of the effects. The Pro Extended (299 GPB) adds LFO modulation to most of the effects, which opens up more possibilities for weirdness, more preset libraries, and batch processing, which is great if you want to process a folder with dozens or hundreds of samples.

I wanted to test the batch processing, so I applied it to some piano samples. Since the piano in question was the public domain samples from the University of Iowa, and Halloween’s coming up, there was no reason to not make them available for free download. You can play with them, and see for yourself how Dehumaniser can be used for music. The files are not quite the unaltered output of Dehumaniser – I did go through them afterwards and trim the sample start points to get consistent attacks between the three different voices (each used different effects settings). There’s no other effects applied, though.

These samples include SFZ mappings and should work in basically any SFZ-compatible sampler, though with Plogue Sforzando you also get a GUI. Here’s the Scarypiano playing Charles Gounod’s “Funeral March For A Marionette”.

I also tried applying various settings to the Open Source Drum Kit, mostly sci-fi settings on the cymbals and fantasy monster settings on the drums. I might make a whole drum kit out of these later, making it more sci-fi and glitchy everywhere, but this is what the results of the first attempt sound like.

Dehumaniser is powerful and unique sound-mangling software. If you want to use it for music, you’ll have to deal with some inconveniences stemming from the fact that it was designed for something else, but its potential for making sounds that are dark and weird is enormous.

Dehumaniser is powerful and unique sound-mangling software. If you want to use it for music, you'll have to deal with some inconveniences stemming from the fact that it was designed for something else, but its potential for making sounds that are dark and weird is enormous.