Today we’re reviewing the MicroBrute, Arturia’s ultra compact analog hardware synthesizer that shares quite a few similarities with its big brother MiniBrute, but still brings some completely new features to the table, such as the modulation matrix and the step sequencer which replaces MiniBrute’s arpeggiator.

“Good things come in small packages” goes the old saying, which is why we were quite eager to run this little synthesizer through its paces and try to find out how much synthesis power is packed in such a miniature instrument. For the retail price of around £250, this small-scale noisemaker seems like a total steal on paper, considering that it’s a 100% analog synthesizer with a whole bunch of knobs and sliders on the front panel and quite a few connectivity options on the back.

MicroBrute is delivered in a nice looking box which contains the following items:

MicroBrute’s keyboard features 25 miniature synth action keys which do feel a bit spongy, but they’re definitely comfortable enough for normal use, considering the synthesizer’s compact size. While the synthesizer itself does not respond to note velocity, the keys are actually velocity sensitive and will transmit velocity data via MIDI. This means that the MicroBrute can actually be used as a pretty decent 25-key MIDI controller, which is a handy option for users who prefer having a small and fully portable setup.

The keyboard’s range is controlled using the octave up and down buttons which are located in the upper-left corner of the front panel. The current state is indicated by the five color coded LED diodes, making it rather easy to adjust the keyboard’s octave setting in low light situations. Although there are only five LED diodes, the keyboard can actually cover six different octave states, whereas the lowest position will light up the two diodes on the left. It’s worth noting that, in case you don’t like using MicroBrute’s mini keyboard, you can always hook up a larger external MIDI keyboard to it and jam away.

The pitch and modulation wheels are positioned right above the keyboard on the left. While this kind of layout would not be ideal on a larger keyboard, it perfectly suits MicroBrute’s small size. Both wheels feel very smooth and precise, without any sort of wobbliness or other nasty defects that are often found on cheaper keyboard models. The pitch wheel is hardwired to oscillator pitch and the modulation wheel can be used to control either the LFO amount, or the filter’s cutoff frequency. We’d love to see a wider variety of modulation targets for the modulation wheel, though.

The back panel is where you’ll find all of the available inputs and outputs, along with some additional controls. Going from left to right, there’s the retractable fine-tune control, gate inputs and outputs, pitch CV input, a 1/4″ mono line output, a standard headphone jack, an audio input jack with a retractable input level control knob, a MIDI IN port, a USB port, DC input, and finally the on/off switch. Pitch CV input is located on the modulation matrix.

Looking at the front panel, the initial impression is that the MicroBrute features a fairly standard control layout for a subtractive synthesizer. You get the oscillator controls in the upper-left corner, a multi-mode filter section in the center and the modulation matrix on the right, with the master volume control right below it. The second row sports the portamento knob and the modulation wheel assignment switch, the LFO section, a single ADSR envelope, and the built-in sequencer with eight pattern memory slots.

Taking a closer look at the available controls, though, quite a few things stand out when comparing the MicroBrute to other synthesizers on the market. To begin with, the oscillator section packs some pretty unique features. Apart from the standard (but very fat sounding) pulse waveform with a pulse-width control, you will also find the overtone/sub waveform which can morph between a standard sub and a fifth, or the saw waveform which can be animated using the “ultrasaw” parameter. The “ultrasaw” effect is fairly subtle, but it actually sounds quite interesting, especially when the animated saw is layered on top of other waveforms. But most importantly, there is the triangle waveform with its “metalizer” parameter which transforms it into this really awesome noisy timbre that can be used to generate all sorts of aggressive and harsh sounds. Layered on top of other waveforms, it works as a rather splendid alternative to a noise oscillator. We were quite happy with the wide variety of metallic and noisy percussion sounds that we were able to make using the “metalized” triangle wave. 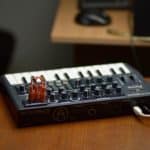 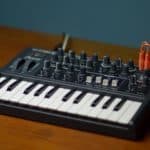 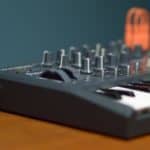 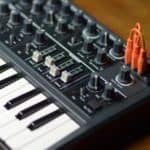 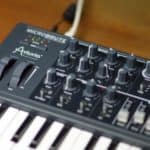 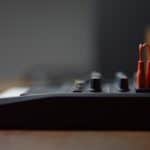 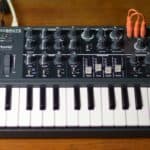 On to the filter section, the MicroBrute uses the same Steiner-Parker multi-mode filter that was used in its bigger brother, the MiniBrute, minus the notch-pass filter mode and the contour speed setting. In terms of MicroBrute’s sound, this is where the magic happens. The filter sounds quite round and creamy when set to a lower resonance, with very pleasant sounding overdrive starting to kick in once the oscillator volume is increased past fifty percent. As you push the resonance closer to its maximum value, the filter starts to scream and roar in all sorts of ways, as if it wants to let you know what kind of a beast the MicroBrute actually is. The synthesizer’s signature Brute Factor parameter, which is essentially a feedback circuit, makes things even more interesting and unpredictable at higher resonance settings, adding a layer of distortion and almost bitcrushed sound quality to the mix. We spent an unhealthy amount of time tweaking this fantastic little filter while jamming with the MicroBrute, and enjoyed every moment of it.

MicroBrute’s mod matrix is where you can override the default modulation setup and use the LFO and ADSR envelope to modulate the oscillator pitch, filter’s cutoff frequency, saw waveform’s “ultrasaw” setting, triangle wave’s metalizer effect, sub waveform’s overtone parameter, and pulse wave’s pulse width. Out of the box, the patching options are somewhat limited since you only get two patch cables, meaning that it is not possible to connect one modulation source to two different destinations. Purchase a couple of cheap mini jack to RCA converters and an RCA splitter, though, and you can make multiple connections from a single modulation source all day long. Add to this the fact that It is also worth noting that the original MicroBrute has a posh sibling called MicroBrute SE, which actually includes stackable patch cables in the box, along with several different color schemes and a really neat gig bag.

The last feature that we’ll highlight in this review is the step sequencer, which is actually one of our favorite parts of MicroBrute’s sound engine. The sequencer is incredibly easy to program and a whole lot of fun to use. Its internal memory can be used to store eight custom sequences with up to sixty-four steps per sequence. The sequences remain saved even after the device is switched off. To create a new sequence, simply enter record mode and input the notes using the keyboard, while adding rests using the dedicated button on the sequencer panel. The sequencer can be fine-tuned using the free MicroBute Software Editor (available for free download on Arturia’s website), which makes it possible to select different play modes and note lengths, or even to backup your sequences for later use.

As you’ve probably already figured out, we really enjoyed testing this little synth. Arturia has done something amazing with its “Brutes”, creating a completely original lineup of analog synthesizers that have all the prerequisites to be considered classic examples of music making hardware in the decades to come. They don’t try to emulate any old analog synthesizer, nor do they conform to being “bread and butter” subtractive synths.

Due to its fantastic sound and superb portability, this particular little synthesizer is equally suitable for use in a studio, on stage, or pretty much any place with access to a power socket. MicroBrute’s ease of use and relatively low price make it the prefect choice for one’s entry into the word of hardware synthesizers. On the other hand, the instrument’s signature features such as the Steiner-Parker filter and its “Brute Factor” parameter, the outstanding triangle waveform with the “metalizer” effect and great connectivity options make it a viable addition to any electronic musician’s gear arsenal.

Although we’d love to see a few improvements and added features here and there (more modulation wheel options, velocity sensitivity, patch memory), these would make for a different instrument at a completely different price point (as in Arturia’s newly announced MatrixBrute, for example). The truth is, the MicroBrute is already perfect for what it is.

SPECIAL OFFER: Arturia is currently running the “Music Through the Ages” promo campaign, offering discounted prices on a range hardware instruments (including the MicroBrute) and iPad apps. The promo period ends on January 31st.

Due to its fantastic sound and superb portability, MicroBrute is equally suitable for use in a studio, on stage, or pretty much any place with access to a power socket. The instrument's ease of use and relatively low price make it the prefect choice for one's entry into the word of hardware synthesizers. On the other hand, its signature features make the MicroBrute a viable addition to any electronic musician's gear arsenal.