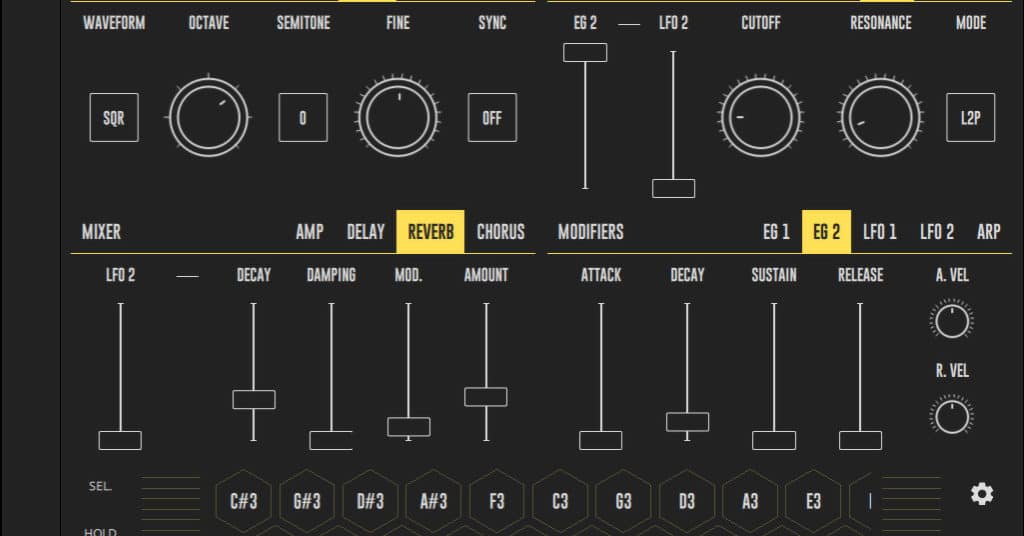 Imaginando’s flagship virtual instrument was already mentioned in our news section in March last year. In case you missed that article, the TL;DR is that DRC is a cross-platform virtual analog synthesizer for Windows, Mac OS, Android, and iOS. And if that sounds interesting, keep reading because we’re taking it for a spin.

Before we take a closer look at DRC’s interface and synthesis engine, though, one thing needs to be highlighted. This virtual instrument is fully cross-platform, meaning that it provides the exact same functionality when used as a VST/AU plugin in your DAW or as an app on your Android/iOS device. And yes, this also means that you can transfer your patches from one platform to another. Cool, right? But more on that below.

DRC features a modern looking interface which translates well across different platforms. The color scheme is easy on the eyes, with several different color variations to choose from. The controls are large, easy to read, and the layout becomes intuitive after a while…

But not instantly. The thing is, DRC was apparently designed to work (and look) equally well on desktop screens and portable devices, which means that some compromises had to be made. The developers chose to go with a tabbed user interface instead of cramming all the controls on a single panel. The result is an interface that works well on large and small screens but takes some time getting used to. After spending some time with the synth, you won’t have any trouble jumping from one section to another. But there’s definitely a bit of a learning curve. 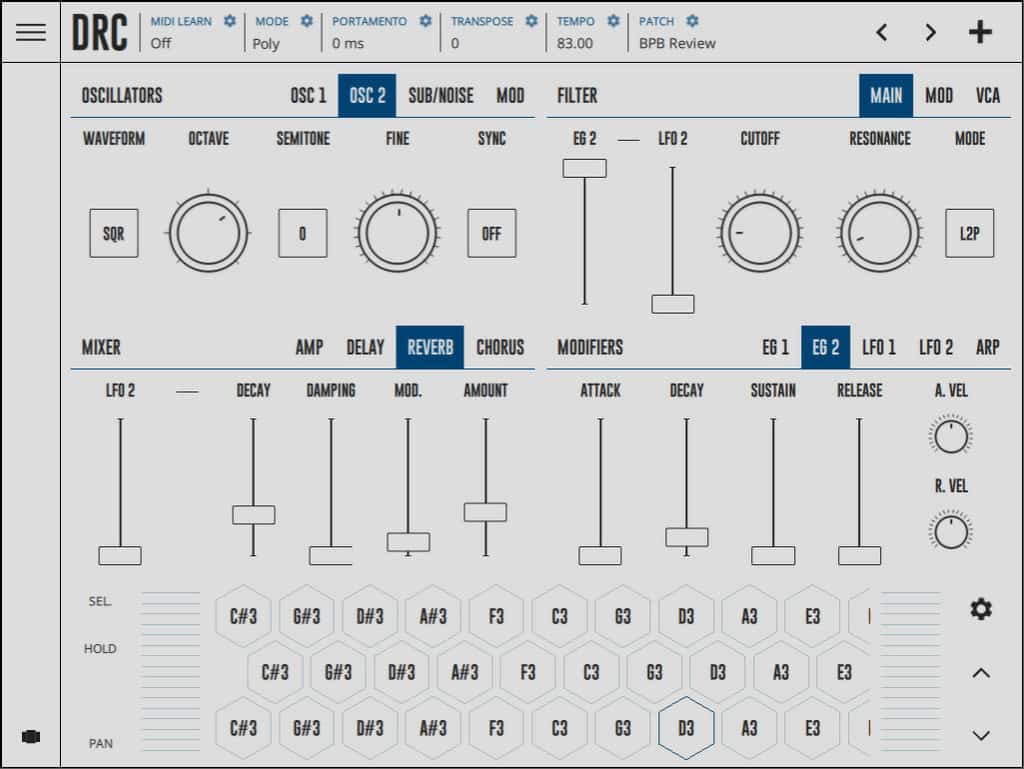 Another minor setback when using the plugin version of DRC is that the mouse wheel is not supported. This is personal preference, but I’m used to adjusting the parameters in most plugins by scrolling up or down while hovering a knob or a slider. Hopefully, this will be introduced in a future version of DRC.

But if we put these minor inconveniences aside, DRC’s user interface is indeed rather solid. As a matter of fact, it is one of the finest interfaces I’ve used on my tablet, and it is also very convenient for use on my Nexus 5X’s tiny 5.2″ screen. The desktop version takes some time getting used to, as described above, but it becomes second nature after a while.

Whereas some compromises obviously had to be made on the UI front, the sound engine is, thankfully, rather feature-packed. DRC offers all the goodies I’d expect to see in a versatile virtual analog synthesizer, and then some. It features two oscillators accompanied by a sub oscillator and a noise generator, a multi-mode filter, two envelope generators, two LFOs, a rather decent FX section (chorus, reverb, delay), a chord map, and last but definitely not least, an arpeggiator. The only thing missing here is a step sequencer, a feature that I’m hoping to see in some future iteration of DRC.

The sound engine is the area in which DRC really starts to shine. Everything blends well together and the amount of programming capabilities on offer will keep any synth afficionado busy for a while. Even though DRC doesn’t attempt to cross the borders of pure virtual analog synthesis, it provides more than enough synthesis firepower for hours of knob tweaking fun.

One aspect I’d particulary like to highlight is the filter section and its five filter modes (two LPs, one HP, one BP, and one HP). There’s no bigger turn off in a VA synth for me than a bland, boring sounding filter, but DRC’s filter module is anything but boring. The 4-pole LPF delivers that classic Moog filter flavor, whereas the 2-pole LPF delivers something that sounds fairly similar to Korg MS-20’s screaming filter vibe. Both filters respond very well to higher gain settings in the mixer, leading to all sorts of interesting and tasty overdrive noises at higher resonance settings. Paired with the decent sounding OSC section and the excellent sounding chorus effect, DRC’s low-pass filter duo is capable of delivering some seriously fat bass sounds, as well as juicy distorted leads.

The fun doesn’t end in the filter section, though. DRC is a polyphonic synthesizer that works equally well for analog-style pads and lush textures, thanks to it’s built-in reverb and delay modules. It can also be used for generating various SFX noises and crazy sounds once you dig deeper into the modulation settings.

So far, so good, right? But we still haven’t touched DRC’s killer feature and that is – the preset cloud. I know that plenty of users still prefer to keep their DAW offline in order to keep it safe from the distractions and dangers of the world wide web. I’m way past that phase, though, and the very thought of tweaking a synth patch on my phone during a train ride, uploading it to the cloud as I exit the train, and then importing it into my main DAW when I return home, makes the tech geek inside me cry real analog tears of joy.

Seriously, the ability to program a bunch of patches on the go and then use those same patches in a desktop DAW environment (and vice-versa) is a huge improvement to my music making workflow. It’s becoming so hard lately to find the time to just sit down and make some music, that the ability to do it outside of my home studio is something that I truly appreciate. Sure, there are plenty of mobile apps for making music out there, but not many of them integrate so well with desktop-based hosts. DRC is, for me at least, the first VST plugin that I can literally carry around in my pocket and then continue using on my PC.

DRC nails the concept of a fully cross-platform virtual instrument. If you ever wanted to take a VST plugin outside of your studio without having to carry a laptop, this is the way to go.

There’s one last hurdle, though, and that is the price. The desktop (VST/AU) version of DRC costs $99 and the mobile versions for Android and iOS cost $9.99 each. That’s a minimum of $108.99 in case you want to go cross-platform with DRC. Not a small investment by any means, but portability comes at a price.

Btw, there’s still some time left to grab the desktop version of DRC at a 40% discount. Use the coupon code CARNAVAL_2017 on the product page linked below to apply the discount to your purchase.

DRC is, for me at least, the first VST plugin that I can literally carry around in my pocket and then continue using on my PC.