Sonible entered the music software scene back in 2015 with the release of frei:raum, a multi-functional equalizer plugin which was designed to automate, to an extent, the mixing process. One year later, the company introduced the EQ+ plugin series, a bundle of three separate plugins which are, essentially, standalone versions of frei:raum’s three processing modes. In this review, we’re taking a closer look at one third of the bundle: the smart:EQ+ plugin which speeds up the mixing worfklow by adapting its curves to perfectly fit the processed audio material.

At first look, smart:EQ+ seems rather familiar. The user interface is quite similar to most contemporary EQ plugins on the market. There are eight EQ bands in total – a pair of HP/LP filters, one high-shelf and one low-shelf filter, accompanied by four fully parametric bands. Located below them is a frequency graph which allows the user to control the bands by dragging the corresponding control point across the spectrum. Pretty standard stuff so far. So what’s the catch?

If you look closer at the screenshot below, you’ll notice a tiny magic wand icon next to the four central EQ bands. This is what makes smart:EQ+ stand out compared to other EQ plugins on the market and where the magic happens, literally. 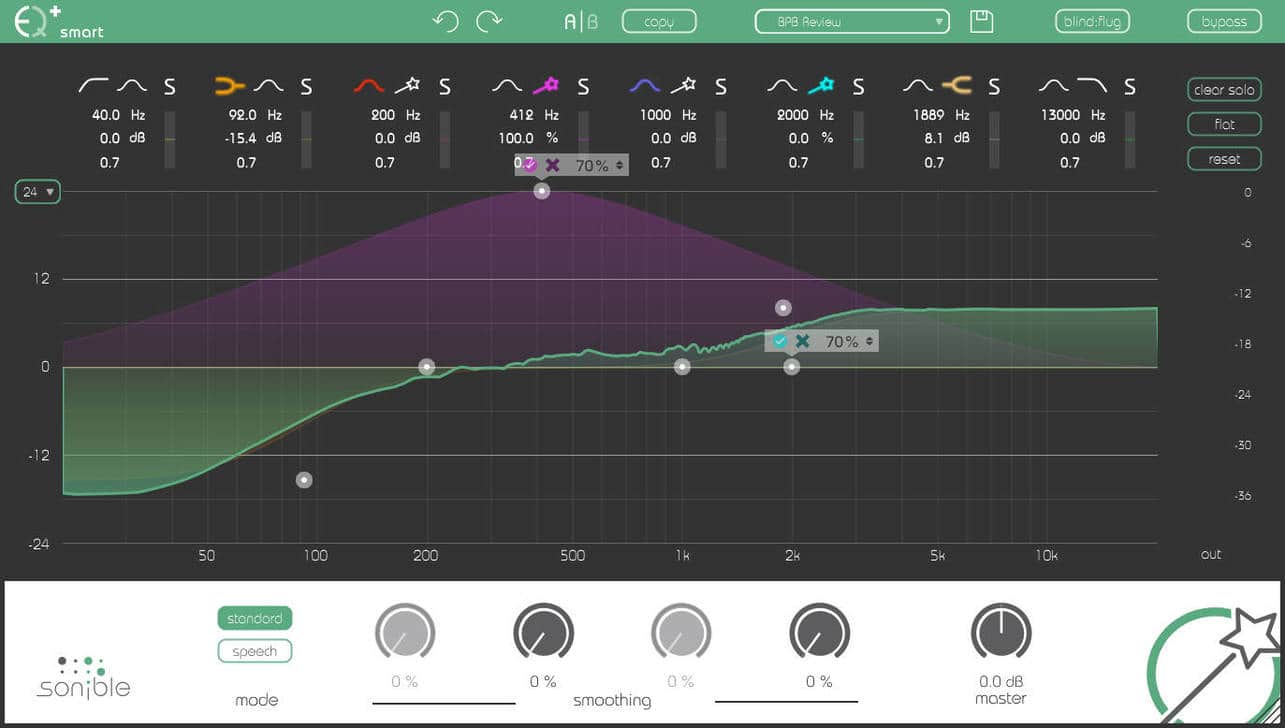 Find four hidden magic wands in the image above.

Clicking the magic wand icon triggers the plugin’s “learning mode”. Once engaged, smart:EQ+ will analyze the audio signal on the input and adjust its “smart” EQ curve to become a perfect fit, at least according to the plugin’s algorithm. The learning process takes only a few seconds, so keep in mind that it is crucial to feed the plugin with a relevant part of the audio material that you’re going to process. If you’re mixing a vocal, make sure to allow smart:EQ+ to analyze the most important segment of the recording.

What Sorcery Is This?

After the learning process is completed, the magic wand icon will stop blinking and any gain adjustments you make on the active EQ band will follow the customized curve. Instead of simply increasing or decreasing the gain following a basic EQ curve, smart:EQ+ will automatically apply a set of detailed micro-adjustments to your boost or cut.

These micro-adjustments are supposed to attenuate any nasty resonances in the boosted area, as well as to balance your manual gain adjustments by applying the opposite gain adjustments in surrounding frequency bands. For example, if you apply a boost around 5 kHz, smart:EQ+ will automatically balance that with a subtle cut around 10 kHz and plenty of minor adjustments across the spectrum.

I have to admit that the customized EQ curve looks rather impressive when visualized on the plugin’s display, almost magical. After all, making dozens of large and small EQ adjustments with a single move of your mouse is no small feat. The feeling has to be similar, I suppose, to waving a magic wand across your messy room and seeing all the stuff magically realigned and rearranged to its proper place.

So, the customized EQ curves look pretty cool, but how do they sound? Is smart:EQ+ a proper mixing tool, or just a gimmick?

I’ve tested the plugin on a range of audio material and the results were excellent, for the most part. smart:EQ+ works best when applied to individual tracks. For example, it excels at detecting resonances and unbalanced frequencies in vocal recordings. There’s even a dedicated “Speech” mode for processing the human voice. The plugin also worked great on guitars and acoustic instruments. The custom curve helps with adjusting the tone of these mix elements without going overboard or making the recording sound too unnatural.

The results were less impressive when trying to process the entire mix (or a busy stereo bus) using the custom curve. In certain cases, when the mix was particularly unbalanced, smart:EQ+ would successfully pinpoint the problem areas. However, most of the time, I’ve found that using the regular non-customized curves works better for controlling the mix.

This leads us to another advantage of using smart:EQ+ for mixing, and that is the possibility to use it as a plain old linear-phase equalizer if desired. The plugin already works as a very well-made parametric equalizer, and its “smart” functionality is only an expansion to an already solid mixing tool. In other words, smart:EQ+ can potentially become one’s go-to EQ plugin for most mixing tasks, both as a standard parametric equalizer and a semi-automated tool for tonal balancing.

When talking about smart:EQ+, the most important question is whether its customized EQ curves translate to better sounding mixes, or, at least, a simplified mixing workflow. Is smart:EQ+ just a skilled magician, or a proper mixing wizard?

One thing to understand first, though, is that smart:EQ+ isn’t a one-knob plugin that fixes your mix “auto-magically”, nor is it supposed to be. You’ll still have to make the critical decisions in your mix and arrange all the track elements across the frequency range manually, as with any other equalizer. What smart:EQ+ will do, however, is help you apply those mix decisions more precisely and, to an extent, help you avoid some of the destructive aspects of EQ-ing. The results will, most often, sound more transparent and natural than what you’d get with a regular equalizer.

That said, I’m not quite sure that smart:EQ+ justifies its rather steep price. It is a well-made mixing tool, sure, as well as somewhat of a revolutionary mixing utility, but the price is what prevents it from becoming a product “for the masses”. Hopefully, we’ll see some discounts in the future, as these would make smart:EQ+ a far more tempting purchase.

smart:EQ+ isn't a one-knob plugin that fixes your mix "auto-magically", nor is it supposed to be. You'll still have to make the critical decisions in your mix. What it will do, however, is help you apply those mix decisions more precisely and, to an extent, help you avoid some of the destructive aspects of EQ-ing.