Opening the box, assembling the iRig and connecting everything to a guitar and an amp took only a few minutes. There are two essential pieces here: a small microphone, about the size and shape of a guitar pick, intended to mount on the soundhole of an acoustic guitar; and the preamp/interface box. There’s also a zippered carrying case, which fits neatly inside that under-the-neck accessory pocket of guitar cases, a belt clip, and a pair of batteries. The microphone can be mounted to anything that has an edge of a similar thickness to a typical acoustic guitar soundboard. Bowed string instruments and most hollow-body guitars have tops that are probably too thick (my double bass certainly does), but pretty much any conventional flattop acoustic guitar or ukulele should be fine, whether right or left handed. The microphone has a thin cable over a meter in length permanently attached, with a mini jack – enough to reach the preamp without risking getting tangled underfoot or stepped on.

The preamp is remarkably full-featured. It can blend the microphone signal with an AUX (intended mainly for piezo pickups), has a tone switch with preset EQ curves for normal, warm and bright in steel-string and nylon-string flavors, plus the ability to auto-calibrate based on the input signal, and a feedback-cutting filter. Outputs are 1/4″ audio and USB. Small preamps keep getting smarter and more sophisticated in recent years, but getting calibration and USB outputs at this price is still a shock.

I tested the iRig Acoustic Stage with a Takamine LTD 2013 guitar, a nice Japanese-made instrument with an excellent built-in piezo pickup and tube-based preamp, an Acoustic Image Clarus amp which is a very common portable head for acoustic instruments, and a Wharfedale PA cab with a 12″ speaker plus a tweeter.

The sound from the little microphone is remarkably full, natural and balanced, and not quite as immediate and dry as the piezo (which is, after all, picking up the signal directly from the bridge). Blending the mic and piezo sounds even more natural. Now, if the mic and piezo signals had to battle to the death with only one survivor, the piezo signal would ultimately win because its high end is a little cleaner in this case – but this is an above-average piezo, and the mic does sound much better than the piezos in more budget-friendly guitars. 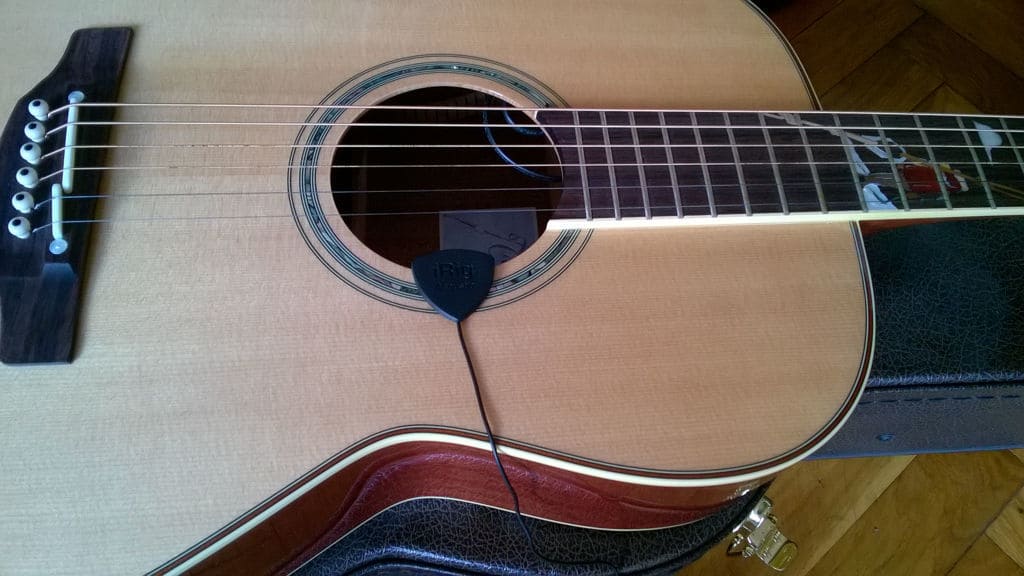 Mounting the iRig Acoustic Stage to an acoustic guitar is an easy task.

The sound is never going to be as rich as a large-diaphragm condenser microphone in front of the body, of course – don’t expect miracles here – but it’s much more natural than a Shure SM58 pointed at the guitar or a magnetic soundhole pickup. For recording acoustic guitar at home, this is a good solution if you can’t afford a decent condenser and an interface with phantom power. Even if you do have a good condenser, the iRig’s mic either alone or blended with a piezo makes a good second channel – an extra-dry signal which is nice for added shimmer, especially on delay sends. Plus, it picks up very little external noise, so if you need to record in a noisy environment like many bedroom producers often do, this can save you from having to redo takes because a car drove past the window or somebody in the next room was talking.

For live use where feedback would make that condenser useless, the iRig Acoustic Stage is a great solution – that’s why it has “Stage” in the name. The mic is more sensitive to feedback than the piezo, but, of course, a lot less sensitive than an external microphone pointed at the guitar would be. The feedback cancel button does help somewhat, but would not be enough for playing with a loud drummer while getting audible guitar signal in your monitors – no microphone will really work for that. The microphone is fairly sensitive to hitting the soundboard or the mic cover with a pick, certainly more so than the under-the-bridge piezo, but not extremely. Even drumming on the top with the fingers is musically usable, and not overwhelmingly loud. Adjusting the volume works quite well, and can be done by feel even with the preamp mounted on your back, but the on/off switch makes a loud pop when switched off, even with the volume set to zero. Although switching it on is nice and quiet, you have to remember to not turn the preamp off without turning the channel or amplifier it’s plugged into to zero first. Otherwise, the sound guy will hate you.

The fact that the mic can be mounted on a guitar in a few seconds without having to adjust screws is great. If you run an open-mic night where lots of people show up with guitars and only some of those guitars have a pickup, this is the most convenient way to get them all amplified. I’ve played plenty of gigs with singers who had an acoustic guitar but no pickup, and after all the annoyances with small clubs not having enough microphones, borrowing guitars from other people, and taping soundboard piezos to guitars, this is a very simple and inexpensive solution to all that.

The difference between the preset EQ curves is subtle, not drastic. The natural setting does, indeed, sound the most natural. The bright setting is slightly more sparkly and thinner and can be useful for cutting through thick mixes. For recording, though, it’s probably best to leave the EQ on natural and process the sound afterwards with EQ plugins.

Now, being a “use every part of the buffalo” kind of guy, I also had to try this mic out on vocals. There it doesn’t sound too natural, and is pretty sensitive to wind noise, but don’t get too close to it and it’s good enough for scratch vocals. Being small, it can also be used for foley recordings, especially foley techniques which use a cardboard box, since the mic can be mounted quite easily to the edge of the box and will pick up sounds from inside of it without too much handling noise. Still, this is essentially a specialized guitar tool, and don’t expect to get too much other use out of it for recording other audio sources.

At 100 euros, the iRig Acoustic Stage is ridiculously good value for money and very practical if you need to amplify an acoustic guitar live. For home recording, it is also a very useful tool, and the most inexpensive way I can think of to capture a good acoustic guitar recording.

iRig Acoustic Stage is ridiculously good value for money and very practical if you need to amplify an acoustic guitar live. For home recording, it is also a very useful tool, and the most inexpensive way I can think of to capture a good acoustic guitar recording.