Edifier R1800BT is an affordable (£119.99 at Amazon.uk) pair of Bluetooth speakers that is widely considered as one of the best-buy options in its price range. I was curious to find out if they could also be a viable option for beginner DJs and music producers looking for a budget-oriented first pair of speakers for their starter setup.

Edifier might not be a household name in Europe and Noth America, but the company hass been around since 1996 and has since dominated the consumer audio market in China. They’re specializing in the manufacturing of home audio equipment and are recently becoming more and more popular on the global market by offering relatively affordable speaker systems that offer plenty of bang for the buck.

It’s not unusual for Chinese brands to provide plenty of goodies and add-ons in the base package, including various pieces of added gear that would be sold separately by more well-known brands. Edifier is not an exception in this case, as the R1800BT box includes quite a few bonus bits and pieces, such as the required audio cables, removable speaker grilles, a remote control unit with a corresponding CR2025 battery (doesn’t it suck when the battery is not included?), and even a cleaning cloth (more on that one later).

The packaging is fairly simple and there’s not much of an “unboxing experience” to speak of, but the important thing is that all the required (and then some) parts are included in the box. Everything is safely packed inside the box and secured with fair amounts of styrofoam and nylon.

The speakers look and feel well made, leaving the impression of being slightly above their price point in terms of build quality. The design is elegant and could fit a living room or a bedroom studio equally well. The weight of roughly 6 kg (around 13 pounds) makes these speakers less portable than, say, the iLoud Micro Monitors which we reviewed a while ago, but the R1800BTs were obviously designed as a pair of speakers that won’t be moved around too often. That said, they are still relatively easy to pick up and relocate if needed.

The front grilles can be removed to show off the drivers if a more aggressive look is desired, or kept on for that classic “bookshelf speaker” appearance. Both options work very well, and the exposed drivers look surprisingly elegant, which can’t be said about some of the alternative offerings in this price range. The overall classy look is further enhanced by the glossy black piano finish used on the side panels. However, whereas the shiny material seems like a fantastic choice at first, the fact that it is one hell of a fingerprint magnet makes it less appealing after a while. Seriously, even touching the speakers ever so slightly leaves visible greasy stains that don’t look so gorgeous, to say the least. This is where the included cleaning cloth which we mentioned previously will come in handy, though. 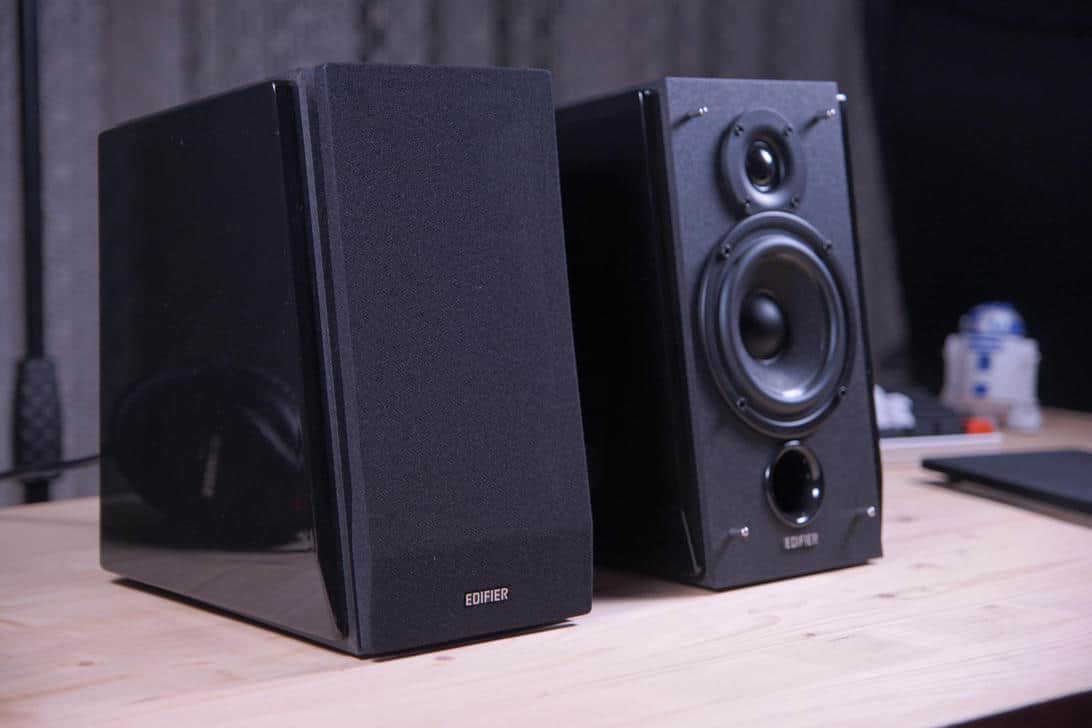 Edifier R1800BTs look elegant both with and without the grilles.

Speaking of the previously mentioned items, the included remote controller doesn’t share the same build quality as the rest of the set. There’s nothing wrong with it regarding functionality, but the unit does feel a bit plasticky and leaves an impression of being more prone to physical damage than the speakers. Still, except for lacking the premium feel of the speakers, the remote controller worked fine during our test. The included cables feel very sturdy and durable, especially the one used to connect the two speakers together. It is 5 meters long, allowing for some serious distance and stereo separation between the two speaker units.

R1800BTs are, as the acronym BT in the product name suggests, Bluetooth speakers. One thing that needs to be clarified right away, though, is that these don’t have a built-in battery, meaning that they’re not the type of Bluetooth speaker intended for use in places without access to power. Instead, these are home speakers that can connect to different sound sources with the benefit of not having to use a cable. Of course, you could always use one of those crazy external power banks with a regular power plug if you want to bring the R1800BT on a picknick, but that kind of portability and excess geekery comes at a premium price.

Back on topic, Bluetooth is not the only option for connecting the speakers to a sound source, either, as a regular “wired” audio input is also provided. There are two pairs of RCA inputs, actually, one labeled “PC in” and the other labeled “Aux in.” The difference between the two is their input sensitivity (700mV±50mV for the PC input and 550mV±50mV for the Aux). The Bluetooth connection worked very well with all tested devices (two different Android smartphones, an iPad 2 Mini, and a Windows 10 tablet), although the input volume was somewhat lower than that of the wired connection options. Despite the drop in volume, the Bluetooth connection was stable, and the range of around 10 meters is plenty enough for most home-based applications.

A handy feature of the R1800BTs is their ability to connect to two audio sources simultaneously (via line input and Bluetooth) while changing the active source using the remote controller. The playback source is identified by the color LED on the front (green for audio input and blue for Bluetooth). It’s a handy way to switch the input source from a distance in case you want to quickly play something from your mobile phone or a tablet while the speakers are connected to the PC via cable.

Whereas the looks and build quality are undeniably important features, the sound quality is what makes or breaks a set of speakers. Having read some of the positive user reviews on Amazon prior to testing the Edifier R1800BT speakers, my expectations were already somewhat high. The surprisingly good build quality and classy looks pushed my expectations even further, so I was pretty eager to finally hook these up to my DAW and play some reference tracks. Thankfully, the high expectations were matched with a great overall performance in reality, with a few minor drawbacks that I’ll cover below.

Firstly, one huge positive feature of the R1800BTs – the output power and the unit’s ability to remain fairly distortion-free even at higher volumes. The speakers are plenty loud (they’re rated at 70W RMS) and can easily reach unpleasantly high volume levels, let alone fill a room with sound. They’re perfect for occasional house parties or playing your favorite tunes super loud from time to time. The sound quality remains acceptable at full blast, too. Mind you, some distortion is definitely present, but not the crunchy mess that’s to be expected from lower quality multimedia speakers. Edifier credits the excellent performance at higher volumes to DRC (dynamic range control) and internal digital audio processing, presumably to slightly adjust the frequency range at different volumes to prevent clipping. The 100% MDF enclosure also reduces the acoustic resonance of the speakers.

The sound quality at normal listening levels isn’t lacking either. The bass response is solid, thanks to the 4″ bass drivers and the front-facing reflex ports on both speakers. The mids and the highs are handled very well, too. The 19mm tweeters do a good job and are a decent match for the bass drivers. Overall, the frequency response is fairly transparent for a pair of hi-fi speakers, although they definitely don’t (nor are intended to) dwell into audio monitor territory. That said, those looking for a set of speakers that could handle occasional (and very basic) music production tasks while being used primarily for listening to music will get some very decent performance from the R1800BTs. Just for fun, I even hooked them up to my hardware synth setup which consists of the Moog Minitaur, the Arturia MicroBrute, and a few Korg Volcas. The speakers performed very well in this scenario, and I can see myself using them for jamming with this setup in the future. 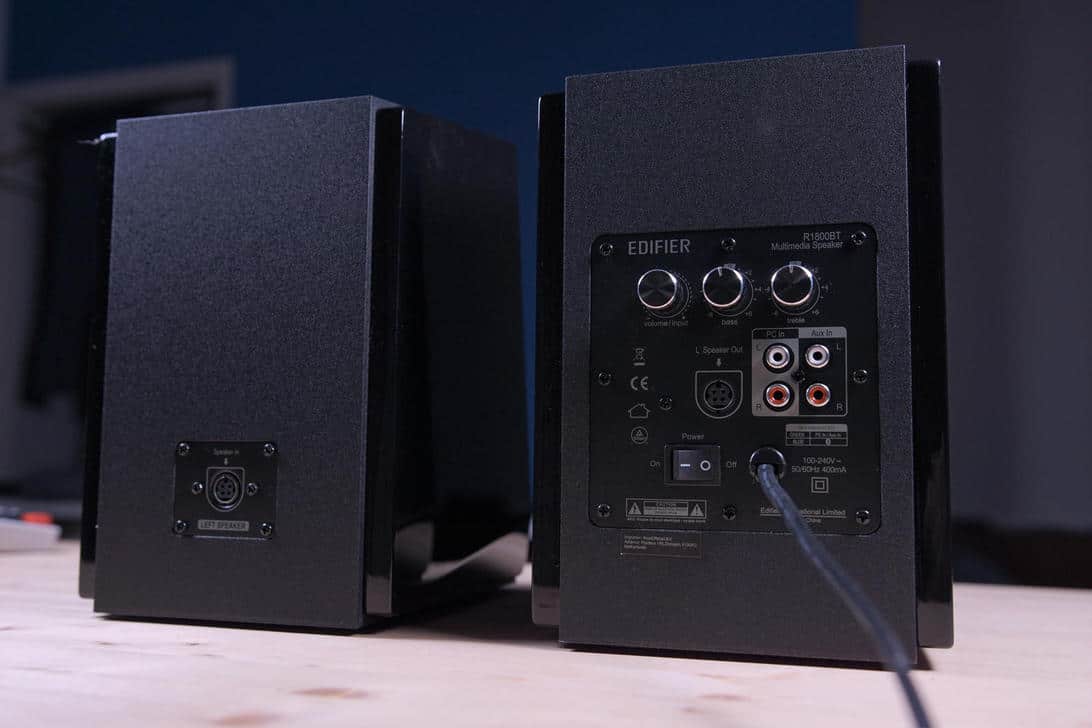 The 3-band equalizer on the back is handy for adjusting the frequency response to better match different sound sources. It is a basic but decent equalizer which, unfortunately, can’t be adjusted using the remote controller. You’ll need to reach behind the main speaker to make any changes which isn’t ideal considering that the side panels are so prone to fingerprints.

Now for the nitpicks. All the positives mentioned above are perfectly valid if the price and the size of these speakers are taken into account. I always try to adjust my expectations in regards to the cost of a product. If we take the price out of the equation and simply compare the R1800BTs to any other pair of speakers, then I’d rate the sound quality as above average although not perfect. The bass does overpower the mids and the highs somewhat. There’s a noticeable bass spike around 60 Hz followed by a dip in the 80 Hz range, which is a common problem with cheaper bass reflex port designs. Also, the high frequencies lack some detail even at lower listening volumes. The overall sound tends to become a bit boxy at higher volumes. But these speakers also cost less than $150 USD for the pair. Considering the price and their intended purpose, as well as in comparison to the other speakers I’ve heard in this price range, I would describe the R1800BTs and their performance as stellar. They are versatile enough to manage even high volume output with decent sound quality while also sounding pleasant and musical for everyday listening at lower volumes. The included EQ allows for further adjustment depending on the user’s listening preferences.

For listening to music, throwing an occasional party, and even jamming with virtual instruments and working on a rough mix for your demo project, the Edifier R1800BT speakers provide plenty of bang for the buck. The response is solid throughout the frequency range with strong, but not terribly overpowering bass presence. The speakers handle higher volumes better than most other offerings in the price range. Generally speaking, it’s hard to say anything bad about their sonic perfomance considering the cost.

The Bluetooth connectivity is a nice bonus and the provided remote control unit makes the speakers easy to operate from a distance. The looks and the build quality are surprisingly good, except for the side panels which could make the fingerprint cards become a reduntant piece of a CSI detective’s kit. All the neccessary parts, including even a cleaning cloth, are provided in the retail box, though.

For listening to music, throwing an occasional party, and even jamming with virtual instruments and working on a rough mix for your demo project, the Edifier R1800BT speakers provide serious amounts of bang for the buck.