Okay, so it’s been several months since Ableton Live 10 was first announced earlier this year, and I’m just now reviewing it because it has quite literally taken over my life. But now that I’ve managed to pry myself away from it, I’m very excited to share my experience and explain why I personally feel this is the very best version of Ableton Live that we’ve seen so far.

(NOTE: I will just be discussing the new features in Live 10. For a complete, top-to-bottom rundown, you can read my in-depth review of Ableton Live 9.)

I’ve always enjoyed Live’s unusual approach to the digital audio workflow. There are so many different ways to get your ideas down fast, break everything up into separate elements and expand upon those ideas in various ways to create something completely new and unexpected. Live’s creators seem to have a strong focus on that inspired workflow, and it really shows in this update.

The most obvious addition to Live is the new Wavetable synth, which I’ll admit provoked little more than a shrug when I first learned about it, but now that I’ve spent some quality time with it, I’ve fallen in love with wavetable synthesis all over again, and I think Wavetable’s simplicity has a lot to do with that.

They didn’t try to reinvent the wheel, here. They just focused on what makes wavetable synthesis so cool in the first place… the wavetables themselves. There are almost two hundred factory wavetables split up into eleven different categories, several of which are really impressive. But another thing that jumped out at me was the oscillator effects available for each of the two wavetable engines…

FM, which applies frequency modulation to the current waveform with intuitive controls for a dedicated modulation oscillator, a “Modern” waveshaping mode with optional “Warp” and “Fold” distortions, and a choice between two “Classic” effects: Sync and Pulse Width Modulation. There is a possibility that more oscillator effects will eventually be included as well as the ability to import your own custom wavetables, which we’ll probably see very soon.

There are also three new audio effects: Echo, Pedal and Drum Buss. Echo, my personal favorite, was inspired by classic analog tape delay units, even though it’s not a recreation of any one device. It does, however, embody that wonderful, “wobbly” character we all know and love when “Wobble” is engaged to create an irregular modulation of the delay time. You can also create that “time warp” effect whenever “Repitch” is enabled for that big, WHOOSHY wall of sound when you turn the delay time knob.

Pedal and Drum Buss aren’t as jam-packed with features, but that’s actually a desirable quality! That said, for an analog modeled distortion effect, Pedal actually gives you a surprising amount of flexibility with a number of tone-shaping controls for its three pedal models: Overdrive, Fuzz, and Distortion. Like Echo, this is not a recreation of any one pedal, but rather a delicate balance of idiosyncrasies intended to capture all the most desirable characteristics of the hardware, and the same is true for Drum Buss, which is also quite versatile considering the typically utilitarian one-page layout.

Drum Buss, a channel-strip effect designed for drum processing but by no means limited to drums, offers some basic controls and a few hidden surprises, including compression, distortion, lowpass filtering, low frequency enhancement i.e. “Boom” (my favorite trick in the trick bag) and transient shaping, which can TOTALLY change the dynamic of anything you feed through it.

The rest of the new features are mostly workflow-oriented, such as “Nested Groups”. I think I forgot to mention Groups in my Live 9 review, so it’s only fair that I go into that now. Track Groups are a quick and easy way to create submixes with just a few key commands (or mouse clicks), sparing you the painful experience of messing with audio routing options.

There are a number of meaningful improvements in the Arrangement View, such as the ability to shift data within a clip without moving the clip itself, and the ability to Warp the edges of audio clips without having to mess with the warp markers in the Clip View.

“MIDI Capture” is another awesome feature. In fact, it’s nothing short of a miracle! If you play some MIDI notes (and the track is armed) you can press the “Capture” button just to the right of the main Transport controls and it will recall the very last thing you just played on your MIDI controller, even without having the record button switched on. This is a great way to compile MIDI tracks on the fly without the performance anxiety of actual overdub recording. 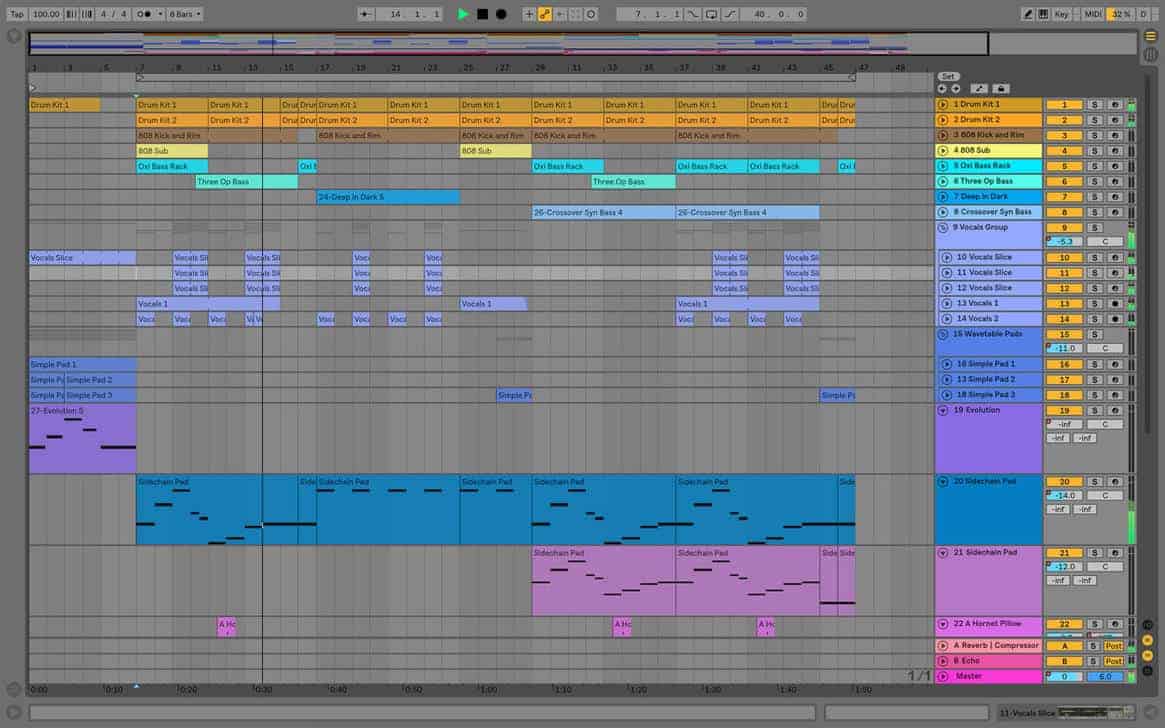 The user interface hasn’t changed much in Ableton Live 10.

Live also demonstrates a cool new way of handling MIDI note data which enables you to listen to any part of a track without having to go back to the beginning of the MIDI clip… a HUGE time saver! Also, there’s another nifty little MIDI trick called “Multi-Clip Editing” that allows you to jump back and forth between MIDI clips in the MIDI Note Editor on separate tracks.

I prefer not to get tangled up in the numerous improvements to Max4Live and Ableton Push, especially considering that people limited to both “Intro” and “Standard” licenses aren’t privy to Max4Live, but I am very happy that Max4Live is now bundled with the software, so no more trips to the Cycling ‘74 website.

For ages, I’ve been bouncing back and forth between Live and different DAWs I prefer not to mention due to a number of workflow-related issues I’ve experienced in Live, but now that Ableton has ironed out the vast majority of those issues, I’ve been spending a lot more time within Live 10, rolling up my sleeves and taking the time to learn the key commands for a more seamless and fluid experience.

And now that we have a basket full of new toys to play with, there aren’t very many reasons not to spring for this update. I would like to see “destructive audio editing” implemented in the Clip View at some point, but I’m very happy with those options in the Arrangement View. That being said, Ableton has earned a reputation for responding to feature requests and fulfilling the needs of their users, so Live is only going to get better, faster, stronger… Well, you’ve heard the song.

Ableton Live 10 introduces a number of useful improvements while continuing the performance-oriented legacy of its predecessors.