While SSD5 FREE is indeed a lightweight version of SSD5, it is a fully functional virtual instrument in its own right. The main limitation, when compared to the full version of the software, is the fact that SSD5 FREE only comes with a single sampled acoustic drum kit. However, it doesn’t limit the end user in any other way, unlike most other free-to-download editions of commercial software. It also doesn’t require an iLok account, which is mandatory for activating the full version SSD5.

Feature-wise, SSD5 FREE is virtually identical to the full version of SSD5. It features the same drum mixer and microphone adjustment parameters, ADSR envelopes for each drum channel, a decent selection of pre-recorded drum grooves in four different styles (Jazz, Pop, RnB, Rock), fully customizable MIDI mappings with a useful selection of presets, and a number of performance adjustments for finetuning the instrument’s dynamic response to one’s liking. Of course, multiple outputs are available for processing individual channels with third-party effects. 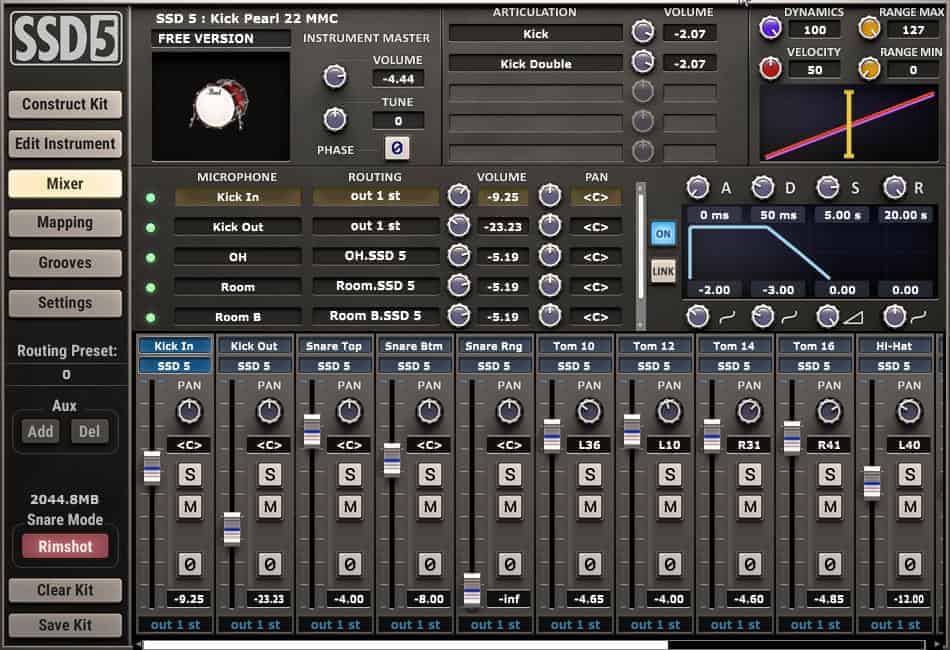 The user interface is intuitive and easy to get accustomed to, partly thanks to the fact that SSD5 doesn’t attempt to go overboard in terms of available features. I don’t mind the fact that SSD5 doesn’t include any built-in effects because I tend to use my favorite third-party plugins for processing drums anyway. All of the most important drum kit adjustments and tweaks can be done within SSD5’s user interface, though, ensuring that the user can create a nicely polished acoustic drum track that is ready for processing inside the DAW.

Back to the big difference between SSD5 and SSD5 FREE, the single Pearl drum kit which is included in the free version sounds very good and is quite versatile in terms of tone with some added processing. That said, it will undoubtedly work the best in a rock music scenario at least when played out-of-the-box. As with all SSD5 kits, there are fifteen drum channels, including two kick drum channels (Kick In and Kick Out), three snare drum channels (Snare Top, Snare Btm, Snare Rng), four toms, hi-hats, ride, two overhead microphone channels, and the SLR channel. By adjusting the balance and tone of individual drum elements, the sampled kit can be pushed toward pop and indie rock music, or used for heavier styles like hard rock and metal.

To download your free copy of the instrument, visit the SSD5 product page linked below and scroll down to the SSD5 FREE section. Click the “Try SSD5 Free Now” button and enter your credentials when prompted. Follow the instructions provided on this page to complete the installation process. The software doesn’t need to be activated after the installation and doesn’t require any third-party software to run on your machine. Do keep in mind that only 64-bit digital audio workstations are supported (thanks to our reader Turello for the reminder).