CHOW Tape Model isn’t exactly a new plugin (it was released on GitHub back in 2019), but I had only discovered it a few days ago. And there’s literally not a lot of buzz surrounding this freeware VST gem, apart from a few forum threads and Reddit posts. This is very surprising, especially since the CHOW Tape Model plugin is easily one of the best free analog tape emulations out there.

The software is based on a physical model of an analog tape machine that was developed as a class project for Music 420 at Stanford University. The physical model is described in a paper published by Jatin Chowdhury and presented at the 2019 DAFx conference (here is a link to the article).

Although the plugin was initially intended to model the Sony TC-260 tape machine, the algorithm was later changed to be a more flexible simulation of a wider variety of analog reel-to-reel machines.

The plugin emulates all the sonic components of an analog tape machine. This includes the analog saturation, harmonic distortion, and other non-linearities that can enhance the sound. But, CHOW Tape Model also emulates the lo-fi aspects of analog tape that are used for a “vintage” effect.

The great news is that you can choose which aspects of analog tape recordings will be simulated. You can use CHOW Tape as a saturation device, a lo-fi effect, or both.

There is a dedicated section for adjusting the depth and rate of wow and flutter that is applied to the signal. The user can also fine-tune the bias, drive, and saturation amount in the hysteresis section.

The developer stated that the CHOW Tape Model plugin was developed as a “research project rather than as a plugin to be used for mixing/mastering.” That said, there’s no denying that this is one of the best free tape simulation effects at the moment.

The tape saturation algorithm is spot-on, and the lo-fi aspects of the tape model sound very realistic. The obvious use for the plugin’s audio degradation features would be to emulate an old tape recorder. That said, the CHOW Tape Model can also be used as an analog-style double-tracking effect thanks to its wow and flutter simulation. 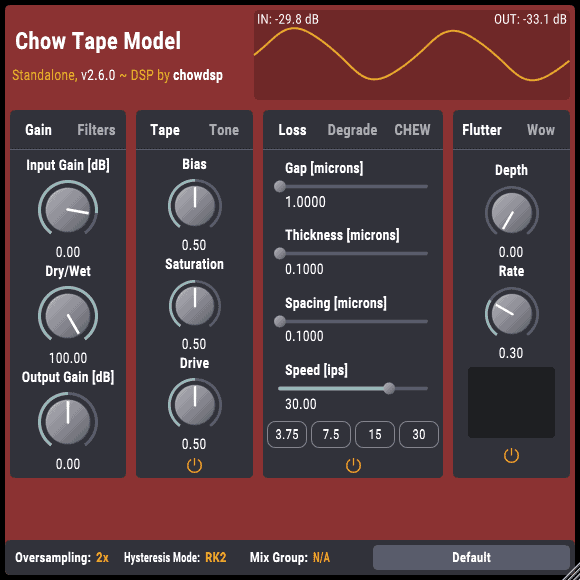 The user interface uses the default JUCE graphics. It is freely resizable, which is an excellent feature in this age of high-resolution screens. The GUI is vertical by default, but you can easily set it to any shape and size by clicking and dragging the lower-right corner.

CHOW Tape Model is available as a standalone effect, as well as a VST, VST3, and AU plugin for compatible hosts on Windows and macOS. A version compatible with Mac OS Catalina is also available, along with an LV2 port. You can download the software completely free of charge from GitHub.