In this review, we are going over Parallel Aggressor, the recently released effect plugin by BABY Audio.

BABY Audio has done something particularly worthy of notice with Parallel Aggressor. The idea behind parallel processing is that if you create duplicates of your signal, you can leave one version unaffected, and the other can be heavily processed.

Having these separate layers of one individual sound reduces the work needed to make a single audio track achieve multiple goals. You can be heavy-handed and creative with compression, EQ, and distortion. Then, mix them into your original signal to produce sonic results that would not be possible if you were to affect your source signal directly.

When you load Parallel Aggressor on a track, your audio splits into three completely separate signals within the plugin itself. The three layers are then summed together on the output.

You have complete control over the three audio signals while within the intuitive, single-window interface. Parallel Aggressor will separate the audio into the following three layers: Spank (processed with sharp and fast compression), Heat (densely saturated), and the unaltered dry signal.

The controls and informative GUI couldn’t be better on this plugin. You have two parallel dials for Spank and Heat on the left and right of the interface. For both parallel processes, you have a meter that relays how much signal is running through each process.

Both Spank and Heat have simple yet effective “Style” controls such as filtering, mono-maker, extra punch, tone, and more. Due to the nature and sound of Parallel Aggressor, I believe if these controls were left out, we would not be missing out on much. However, allowing the user to have more control over their audio is certainly not a bad thing.

That said, I did enjoy the mono-maker on Spank because it ensures the heavy compression is in the dead center of your stereo field, which can do wonders to make sure your mix translates well across many listening environments.

Getting To The Nitty-Gritty

Now to get more in-depth about the sound of this product: Spank is a fantastic sounding compression effect and easily my favorite part about Parallel Aggressor. The way it adds attack and punch to your audio is incredible.

Using Spank on something like drums, acoustic guitars, or even certain types of vocals will add a particular punch that brings the sound forward in your mix and perks up your ears without ever sounding harsh. Spank is a fantastic alternative to traditional transient shapers because you can load Parallel Aggressor directly on a track and tune Spank to taste without ever losing your unaltered audio signal.

When using a conventional transient shaper directly on a piece of audio, you can often make the audio sound unnatural; even when applied in parallel, this adds the extra step of creating an auxiliary track just for the transient shaper effect. Parallel Aggressor removes this process entirely by never altering your original audio directly and giving complete control over how heavily Spank is applied and how loud it is relative to your original sound. 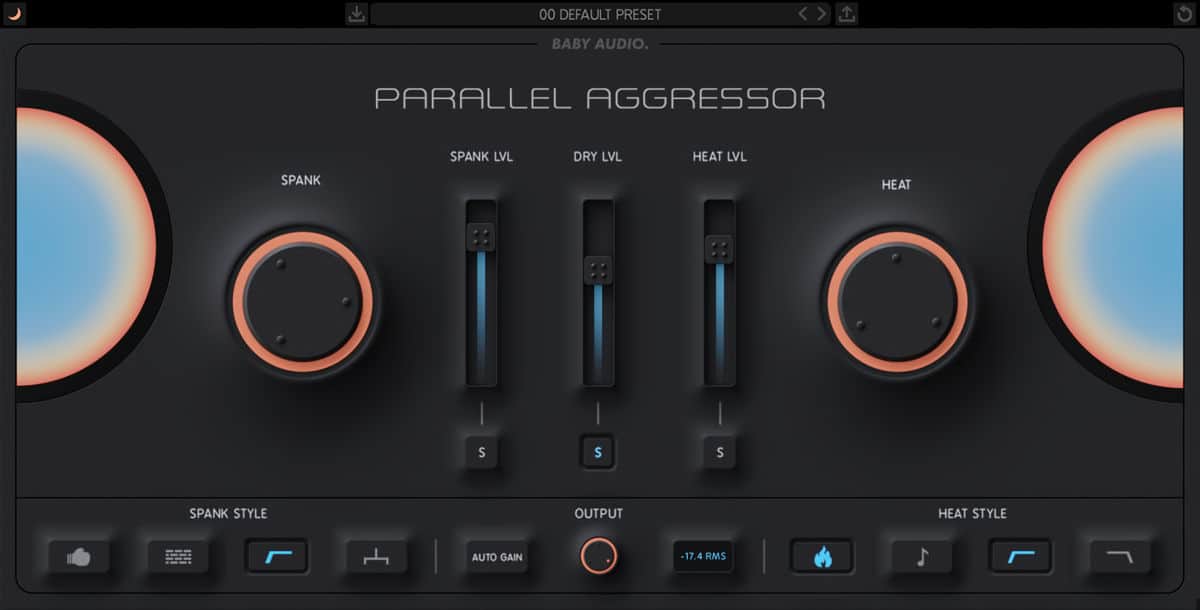 The Heat effect is another beast altogether. While Spank works it’s magic on the initial hit of your sound, Heat offers character and fullness to the body of the audio.

This extreme saturation process, to my ears, sounds very similar to tape distortion. Heat stood up surprisingly well when pitted against a significantly more expensive tape simulator. While there were differences, it was nothing inexcusable given the cost-friendly price of Parallel Aggressor.

Heat gives a lot of character in the high frequencies, and, when used subtly, it will provide depth and definition to things like sub-basses and 808 kicks. What I found most impressive about Heat is when used on audio that had nothing “wrong” with it; when I took Heat away, I found myself missing that extra bit of character and harmonic definition.

Parallel processing plays a fundamental part in getting a “big” mix sound. By processing multiple copies of the same track and blending them together, you can add more punch to a mix — in a more natural-sounding way. It’s like teamwork: Multiple copies of the same track – each focused on doing one specific job – can achieve more together than a single copy being processed to death on its own.

Heat’s saturation benefits from the parallel process, much like Spank does. With heavy distortion on your audio signal, it is not uncommon for you to crush the signal into something unusable, particularly in lower frequencies.

Having separate audio paths negates this by giving harmonic distortion to one and leaving the other pure and safe from unwanted side effects.

I cannot say enough good things when I talk about the sound of Parallel Aggressor.

BABY Audio has crafted something that has honestly become a favorite of mine within minutes of using it. As someone who uses parallel processing religiously, this plugin has found its way into every session of mine.

Although Parallel Aggressor only performs two jobs, it executes them well enough to replace complex and CPU intensive plugin chains that cost many times the price of this single plugin. I can wholeheartedly recommend this plugin to anybody regardless of the existing tools in your setup.

The exceptional sound of this plugin adds so much to your tracks without ever overtaking it entirely; dare I say a product with “Aggressor” in the name can easily sound transparent and musical in any use case.

I could find things to critique like missing out on different distortion types, wanting the ability to run the Spank and Heat effect in serial rather than having three totally separate signals, or not having full EQ controls on the effects. However, it’s hard to be mad when this plugin is highly effective as it stands.

Parallel Aggressor is a must-have sound design tool with a very reasonable intro price of $29 until August 31st, 2020. The software is available in VST, VST3, AU, and AAX plugin formats for DAWs on PC and Mac.

BABY Audio has crafted something that has honestly become a favorite of mine within minutes of using it. As someone who uses parallel processing religiously, Parallel Aggressor has found its way into every session of mine.