Two different Commodore 64s were used for creating the sounds in this sample pack, although both have SID 8580 installed. The original plan was to record some bits from a SID 6581 this time, but my old C64 died literally 5 minutes after I plugged it in. To make that major bummer even major-er, there were no original C64s (aka C64 beige) to be found in the local ads during this three-week period.

However, I did manage to get ahold of a C64G, which was sampled for one of the instruments in this sample pack (the BASIC Bass patch, pictured below). C64G also has a SID 8580 installed, but they do say that every SID chip is different, so there’s still a bit of variety in the hardware sense I guess. All other sounds were captured from a C64C which was also used in the previous pack. Hopefully, a C64 beige will pop up in the ads before I start working on part 3. 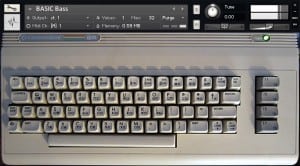 The pack features 14 multi-sampled instruments and one multi patch, with a total of 142 samples in 16-bit WAV format (download size is 79.4 MB). Same as the last time, each instrument comes with Kontakt 5 and Shortcircuit 1 patches. I still haven’t mastered the art of Kontakt scripting, so there are no controls on the interface, only custom GUIs.

Here’s a bit of info about the included sounds:

MiniSID #1 and MiniSID #2 are loosely based on what I imagine as classic Minimoog bass and lead sounds. I’ve never owned a real Minimoog (never even seen one in real life), and these weren’t serious attempts at recreating a Moog sound on a Commodore 64. I really like how they sound, though.

Slow & Low might not sound like much at first, but is actually one of my favorite sounds in the pack. Designed for the lowest of basslines, with a slower attack (added inside the sampler) to avoid clashing with the kick. If you turn it up real loud, you’ll hear the characteristic grainy noise caused by Commodore 64’s graphics chip.

Velocity Test was sampled with three different filter settings, which were then mapped to velocity. This was just a test of concept for something I’m preparing for the next release, but I’ve decided to include it anyway. Note that these samples aren’t looped.

Ensemble 8580 is a Kontakt Multi consisting of three stacked string patches (StringSID #1, #2, and #3). The individual patches are available for both Kontakt and Shortcircuit, but I just couldn’t get the multis working in Shortcircuit. StringSID #2 is 100% SID string machine, the other two have added filtering inside the sampler. Note that there is no FX in the patches, the ensemble effect was made naturally with two different takes panned apart and slightly detuned.

Radio SID is a weird sound made with two triangle OSCs and some heavy ring modulation. Reminded me of bad AM radio signal, hence the name.

Some will probably not enjoy the lack of classic video game sounds in this pack, but I’ve saved that and some other surprises for part 3. Things are heating up from here, so stay tuned!

Also, please leave comments, either positive or negative! Your opinion and tips will help me improve my sampling skills and hopefully result in me releasing better packs in the future.

All sounds in this sample pack are provided free of charge and are 100% royalty free. Feel free to use them in any of your music projects, including commercial ones. The sounds, including modified versions of the sounds, may not be redistributed, nor included in other sample packs. Please do not share direct download links, but link to the original BPB article instead. Thanks!