This free sample pack is the first part of a project I’ve been looking forward to for a long time. In the next couple of weeks, I’ll be publishing three more Commodore 64 Synthesizer Sessions packs, capturing the sounds of my two C64s powered by the MSSIAH cartridge and its brilliant Mono Synthesizer application (Already have part 1? Check out C64 Synthesizer Sessions Part 2!).

Since this is the first pack in the series, here’s a little bit of introduction. While creating the sounds for this project, my goal was to treat the SID chip not only as a chiptune instrument but also as a beautiful sounding analog synthesizer that it essentially is. Thus, these sample packs will include some famous SID sounds, but also some classic synth sounds you probably wouldn’t expect to hear coming from a C64. All samples are recorded 100% dry, with zero processing applied outside the SID for maximum authenticity (zero EQ, zero noise reduction).

Each of the four Commodore 64 Synthesizer Sessions packs will also contain Shortcircuit 1 and Kontakt 5 patches which you can use as a starting point for further sound design. I’ve decided not to limit the polyphony of the included patches, even though the SID itself has very limited polyphony. The thing is I always wanted to have one of those custom synths with several SID chips installed, and this way I can get at least a bit closer to having a true polyphonic SID synthesizer.

Today’s sample pack comes with three sounds: Legend Of SID, Dungeon Of SID, and Rainy Metropolis. All three were created on my slim Commodore 64 with SID 8580 installed. 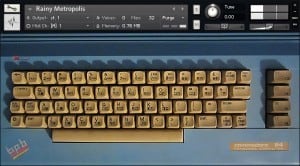 Legend Of SID captures the most famous SID lead sound, used in countless C64 game soundtracks and characterized by pulse width modulation and a fast vibrato setting. I’ve decided to record the samples without any vibrato, thus leaving more options for further sound shaping inside the sampler (vibrato is controlled using MW in the provided patches). On the other hand, the samples do capture the gritty pulse OSC of the SID chip and its characteristic PWM sound very well. I’ll probably include a SID 6581 version of this lead sound in one of the following packs.

Dungeon Of SID is pretty similar to the previous patch, although it’s a bit fatter and more suitable for bass sounds. Only the lower two octaves were sampled. Modwheel controls LP filter cutoff.

Rainy Metropolis is inspired by the famous Yamaha CS-80 lead sound used by Vangelis in the unforgettable Blade Runner opening scene. My Commodore 64 version comes with all the characteristic quirks of the SID (including the choppy decay which you’ll hear on the higher notes), but I love how it sounds, especially in the lower octaves. Once again, vibrato is applied inside the sampler and controlled with the modwheel. I’ve also added some very subtle LP filtering, controlled by velocity. Quick tip – use epicVerb with the L Large Plate preset set to 50% wet to get closer to the Blade Runner sound. This effect was used in the audio demo you’ll find below.

Made some music with C64 Synthesizer Sessions? Send me the link and I’ll feature it here!

All sounds in this sample pack are provided free of charge and are 100% royalty free. Feel free to use them in any of your music projects, including commercial ones. The sounds, including modified versions of the sounds, may not be redistributed, nor included in other sample packs. Please do not share direct download links, but link to the original BPB article instead. Thanks!