We are proud to announce that all VST plugins developed by Mastrcode Music are now available for direct free download from Bedroom Producers Blog, with kind permission of the developer.

Mastrcode Music’s official website has been offline for quite some time now, so we are providing a free download mirror for their fantastic freeware instruments and effects. The developer currently has five different VST plugins in their portfolio, aimed at trance music production and electronic music production in general. For the latest news and updates from the developer, visit Mastrcode Music on Facebook.

For more freeware plugins, take a look at our main VST plugins directory. We are also mirroring free plugins by Sleepy-Time DSP and Mokafix Audio. Please feel free to leave a comment below if there’s any other developer that you’d like to see featured on BPB. Scroll down to the downloads section to download the complete Mastrcode Music plugins collection. 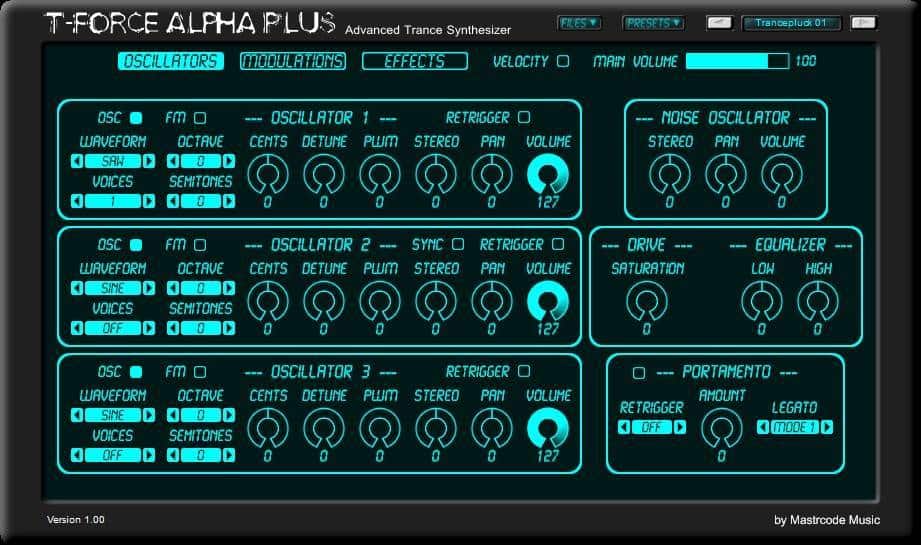 T-Force Alpha Plus (ranked #12 in our top freeware plugins of 2013 list) combines subtractive and FM synthesis in a neat multi-panel user interface that is surprisingly easy to operate. The synth is capable of generating a wide palette of EDM style patches and sequences with its versatile modulation options, a powerful FX section, side-chain compression emulation (an extremely easy way to achieve pumping bass sounds) and a built-in 32-step trance gate. Building sounds from scratch is loads of fun in T-Force Alpha Plus, however the plugin also comes with a hefty amount of factory presets for those of us who prefer the plug and play approach to music making. The only two significant drawbacks of T-Force Alpha Plus are the facts that it’s available for 32-bit Windows only (same goes for all of the other Mastrcode Music plugins) and also a bit CPU hungry. 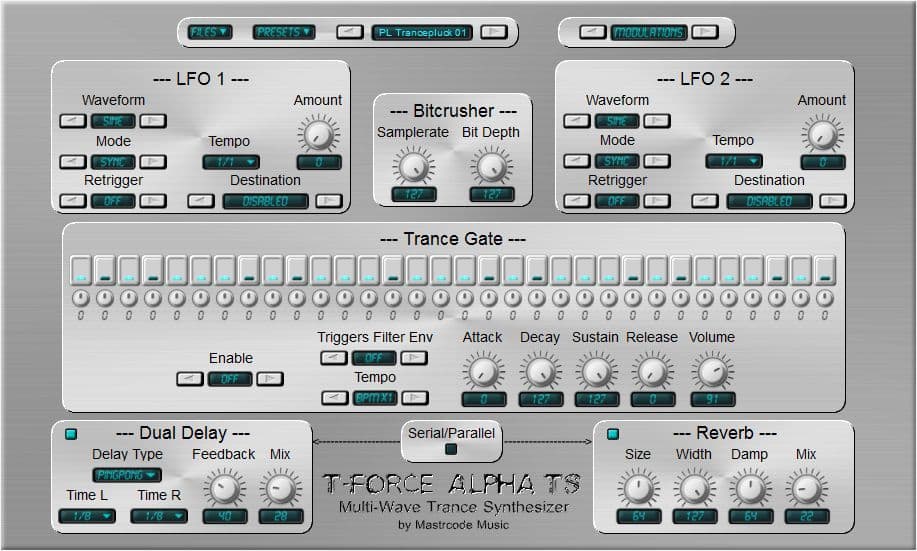 T-Force Trance Gate takes the built-in sequencer module from T-Force Alpha Plus and turns it into a powerful standalone VST plugin which can be paired up with any virtual instrument or other sound source to create classic trance gate style sequences. The plugin supports velocity and panning control for each step, a multi-mode filter and a set of sequencer controlled ADSR envelopes for volume and filter modulation. T-Force Trance Gate also includes a handy FX section with reverb and delay effects, tempo sync and full automation support. By the way, if trance gates are your thing, you should definitely check out the recently released A1TriggerGate plugin by A1AUDIO. It is completely free to download and use, as well as fully cross-platform compatible.

DB-Force The Amen is a unique beat slicer instrument which was designed specifically for mangling the legendary “Amen Break” drum loop. The plugin comes with a pre-loaded Amen Break drum loop and it is not possible to load external loops. This is somewhat of a bummer really, since DB-Force The Amen is a very capable loop slicer with tons of built-in processing tools. On the other hand, even though the plugin is limited to the Amen Break loop, it is possible to get loads of different drum sounds out of it. DB-Force The Amen comes with a global volume envelope, separate volume and filter envelopes for each slice, a multi-mode filter, an FX section, a built-in preset manager and a set of MIDI performance controls.

T-Force Phaser is a simple phaser effect with up to 16 phase cancellation stages. It works great in tandem with other Mastrcode Music plugins, as well as any 3rd party virtual instrument. Supports BPM sync, MIDI learn and automation.

Check out the T-Force Alpha Plus demo video (by HTMEM):

Tomislav is a journalist, music producer, and web designer from Belgrade, Serbia. He is also the founder and editor-in-chief here at Bedroom Producers Blog.