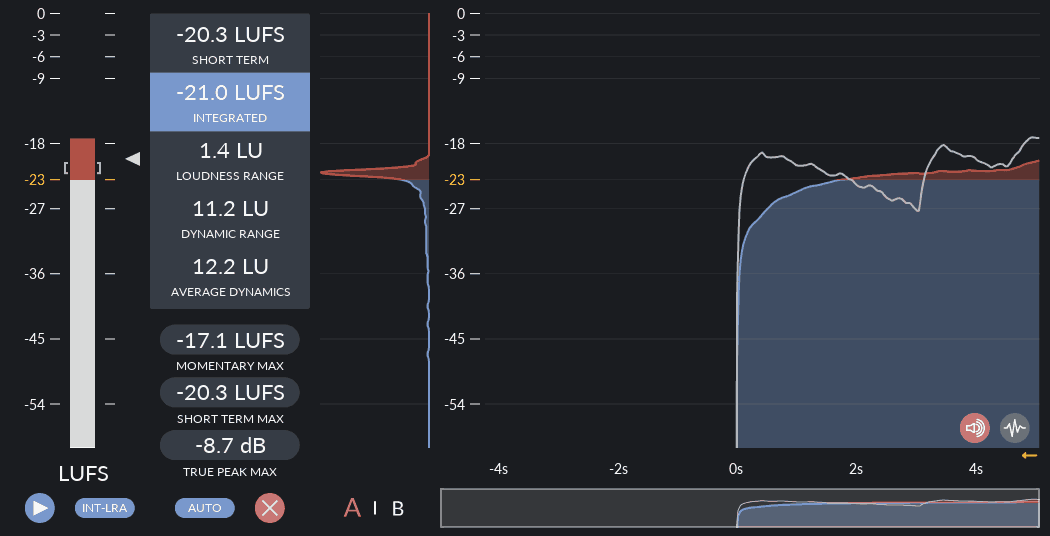 Youlean Loudness Meter 2 was already mentioned on our website, but we are now taking a closer look at the latest version of Youlean’s impressive loudness metering software.

Measuring overall loudness in audio has become a very confusing topic. With so many distribution platforms, many of which require a different final output level, it can be almost impossible to be sure that your audio will reach its final destination at the proper loudness standards demanded by the various outlets.

Youlean’s Loudness Meter 2 aims to solve this issue. It not only measures the overall loudness but also addresses the dynamics of the audio so that you can deliver the ideal level in your tracks without them becoming completely crushed square wave stereo files.

The plugin analyzes the audio based on the globally accepted LUFs standard, which stands for “Loudness Units relative to Full Scale.” It is a newer standard for measuring sound and widely considered to be the most accurate – which is why it is so universally accepted.

If you’re unfamiliar with loudness analysis, Youlean’s Loudness Meter 2 can seem a little daunting at first. The truth is, there is actually no learning curve. The interface is reasonably simple to navigate. There are three main views in which the plugin represents the analyzed audio.

First is the “Mini View,” a numerical representation of the audio in LUFs. In the lower-left of the window, there are two selection menus – Channels and Preset. The “Channels” menu, of course, controls the channel configuration (i.e., Stereo or Mono), and the “Preset” menu selects the output standard – like Spotify, Netflix, etc. There are several standards for quick selection, including all of the big players of the streaming music, gaming, and film industries.

Next is the “Distribution View,” which measures the audio in two ways: one in overall loudness, and additionally in terms of the dynamics. 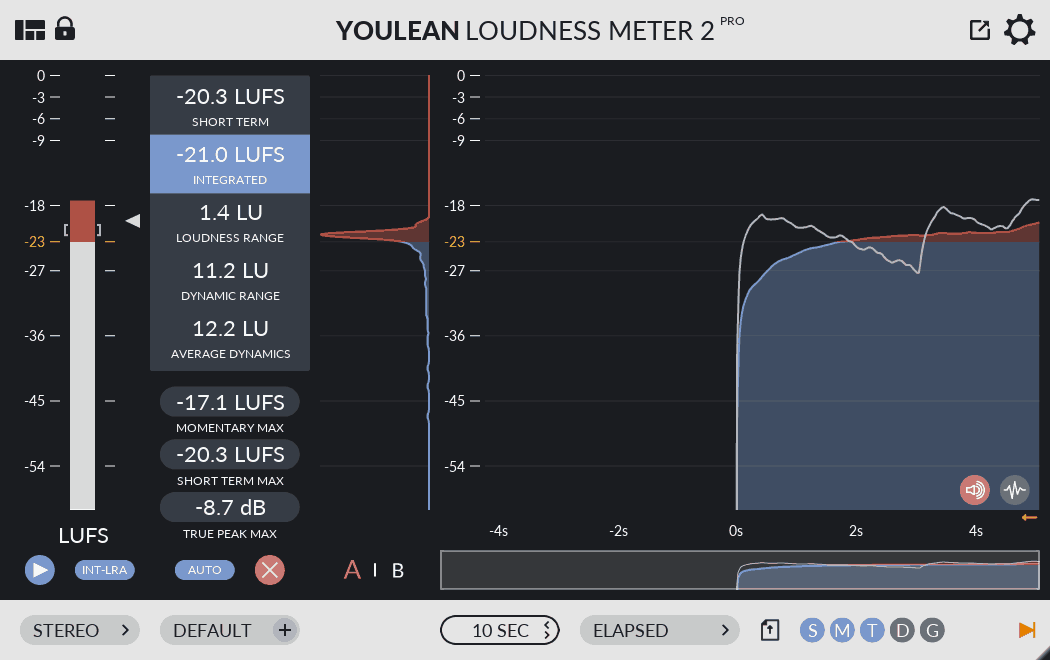 Lastly, there is the “Histogram View,” a graphical representation that some people might prefer over the numerical metering. While each view is entirely useful and can be used individually, the strength of the application lies in using them all to meter the audio symbiotically. This is made pretty seamless with the layout of the GUI. You can also choose which of the view elements to show if you want to customize.

I won’t go into too much detail about the term definitions, but for the sake of understanding the value, let’s glance over a few of the more important ones. Integrated LUFS is the average loudness over the entire track. Loudness Range is the differential between the loudest and quietest parts of the audio, which is useful for evaluating the overall dynamics. True Peak Max is the exact maximum volume and can be adjusted as desired levels can change from source to source.

The plugin can be inserted directly onto a track, but it can also run independently. When used in standalone mode, the user can drag-and-drop an audio file onto the user interface to start the analysis. By utilizing Youlean Loudness Meter 2 this way, it provides a summary of the entire time selection of the audio track.

There are a few key differences between the paid and free versions of Youlean Loudness Meter 2. Although the free version is fully functional, the Pro version of the software adds useful features like the streaming presets, the ability to export the analysis result as an image document (PDF, PNG, or SVG), saving custom presets, dark and light GUI themes, and more.

In the Pro version of Loudness Meter 2, the user can convert the audio data into a single graph that provides an easily digestible analysis readout. The chart can be used in multiple ways. For example, it can be delivered to clients as a visual breakout of what is going on with their projects.

There is a great level of detail in the way that things can be fine-tuned operationally and visually. Every parameter can be adjusted to individual preference. The relative scale slider might be one of the most useful features, as it translates whatever settings are entered in the software to a 0 scale, making it easier to read.

Users can save up to ten custom presets for quick reference. This results in a faster overall workflow, especially when it comes to larger projects. There is a configuration for every situation, including mono, stereo, and surround sound (5.1 and 7.1 and Dolby Atmos).

The metering is so useful, especially in a sound design scenario, that it would even be worthwhile to have it running on a dedicated monitor. Youlean Loudness Meter 2 takes up almost no system resources – even running at the highest resolution.

Loudness Meter 2 is a reasonably straightforward application that presents a lot of value in its ability to help finalize your post-production audio for streaming music platforms, TV, and film. The way in which Loudness Meter analyzes audio and presents the analysis results is quite fantastic – it is both technically correct and easy to understand, despite the sheer amount of displayed information. No matter how you prefer the readouts, the loudness analysis can be customized in any way to integrate into your workflow.

So much detail and effort went into Youlean Loudness Meter 2 that developer even put in an easter egg. If you click on the Youlean logo in the bottom right of the window, it opens up an arcade game! This is great for breaks in sessions or when you need to rest your ears for a bit.

Included in the one-time purchase is a lifetime of updates. The Youlean website even offers free file analysis (still in beta as of this publication). A lot of passion, expertise, and care went into this project – and it shows. There is no doubt that Youlean’s Loudness Meter 2 is the best loudness metering plugin out there.

The way in which Loudness Meter analyzes audio and presents the analysis results is quite fantastic - it is both technically correct and easy to understand, despite the sheer amount of displayed information.