Eventide has released Pendulate, a freeware virtual synthesizer developed by Newfangled Audio. The company has also announced that the full version of the Pendulate plugin, called Generate, is scheduled for release on September 8th.

Pendulate is an innovative virtual monosynth that uses a new oscillator technology based on a double pendulum’s physics properties. It was developed by Newfangled Audio and you can download it for free from Eventide’s website after filling out a form.

Eventide’s chaotic synthesizer excels as a source of dark electronic pulses, glitchy bass tones, and synthetic soundscapes drizzled with static noises. Sure, you can use Pendulate to produce some more musical and mellow sounds, but dark and glitchy electronica is simply the nature of this beast.

Programming sounds from scratch in Pendulate is fun and intuitive, despite the instrument’s somewhat unconventional controls. Perhaps the only synth engine section that is initially confusing is the oscillator module. It doesn’t offer the standard waveform selection or other parameters that we’re so used to seeing in most synthesizers. That said, it only takes a couple of minutes to figure out how the “Chaos” controls affect the timbre in tandem with the “Animate” knob and the sub oscillators.

To make things even more interesting, Pendulate offers MPE support and allows up to 169 simultaneous modulation routings. The modulation comes from external sources, a syncable LFO, and an ADSR envelope, all of which can connect to various synth engine parameters using virtual cables. These cables can remain visible at all times or hidden in the settings menu. 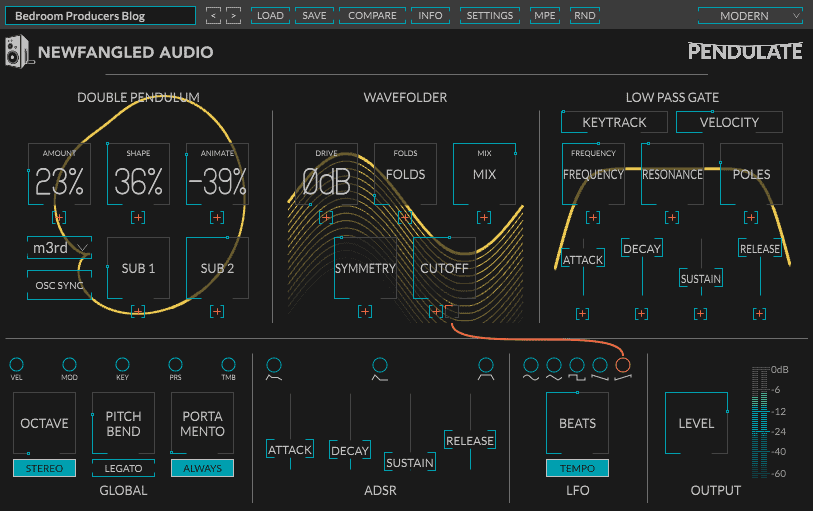 Speaking of the settings menu, Pendulate features three different color schemes (one light and two dark-colored variants), an Open GL mode, and real-time visualizations that can help the user figure out what’s going on in those crazy oscillators and wavefolder modules. And as if the chaotic, pendulum-inspired oscillator wasn’t enough, Newfangled Audio provided a “Randomize” button that sets all parameters, including the modulation routings, to entirely random values.

Here’s how the developers at Newfangled Audio describe the philosophy behind Pendulate’s modules and the synth’s underlying architecture:

Pendulate is a chaotic monosynth based on the physics of a double pendulum. What initially looks like randomness contains underlying patterns, interconnectedness, constant feedback loops, repetition, self-similarity, fractals, and self-organization.

When designing the Pendulate oscillator we took great care to bring out these underlying patterns. The result is an oscillator that can smoothly fade from a sine wave to total chaos, with an expanse of territory to explore in between.

Every parameter in Pendulate’s three modules can be modulated by an included Envelope Generator, LFO, or MIDI and MPE sources. The innovative modulation interface allows you to easily and quickly patch any combination of sources to any destination—creating sounds that are sure to make you move with them.

There’s no denying that Pendulate is a fun sound design tool. This is especially true if you’re bored of using subtractive synthesizers all the time.

However, if building presets from scratch is not your thing, there’s an abundance of included sounds (136 in total) to help you get started with Pendulate. The default presets are sorted into six categories (Bass, Leads, Rhythmic, Plucks, FX, and MPE), with two additional folders containing sounds designed by Matt Lange and Matthew Wang.

The GUI isn’t scalable, but that feature should be coming soon, according to our source at Eventide. They’re expecting to include it in a forthcoming update. The current interface is around 800 pixels wide, which is sufficient for use on standard HD screens.

Eventide announced the forthcoming release of Pendulate a few days ago, with a teaser video (embedded below) that sparked the interest of many viewers, myself included.

In fact, the synth sounds featured in the video are so cool that a lot of people figured Pendulate will be a paid product, or “yet another must-buy from Eventide.” So, kudos to the people at Eventide and Newfangled Audio for releasing such a brilliant virtual synthesizer for free.

The software is available in VST, VST3, AU, and AAX plugin formats for 32-bit and 64-bit digital audio workstations on PC and Mac, and it doesn’t require iLok. To download your free copy of Pendulate, visit the promo page on Eventide’s website and fill out the form.

UPDATE #1: You can also download these free Pendulate presets by Damon Armani.