Well, this was unexpected. Native Instruments have just announced that a fully standalone Maschine device that now works on its own, without a laptop, for the first time. It’s called Maschine+ and is currently available for pre-order at most major retailers. The new Maschine+ officially hits the stores on October 1st, 2020.

Until recently, Maschine was a universally beloved device, but not one without competition, particularly from Ableton with the Push 2. Going completely laptopless means that Maschine is finally in a league entirely its own, just like when the original was first announced back in 2009.

So, how does the future look?

Maschine+’s “no computers allowed” approach is facilitated by a built-in Linux computer, though the user can not access the computer itself. I’m sure someone will figure out a way to port Doom to it within a month, regardless.

It also looks gorgeous, like an MPC60 designed by Bang & Olufsen. Many design elements are either new or significantly more high-end than previous versions of the device. The metallic gray finish gives it a very nuanced look.

There’s also a ton of improvements that seasoned users are likely to appreciate. For a start, the main encoder now works like a joystick in four directions. Also, Maschine+ supports Ableton Link right out of the gate, and you can register, update, and download sounds entirely from the device.

There’s a dedicated Clips button to accommodate the software’s new feature, and the touch strip now also lights up to reflect the current beat measure during playback. There’s an SD card slot with an included 64GB card.

The only thing I can critique without having access to the device is its selection of sounds. Maschine comes with its standard drum and bass synths, as well as some onboard effects. NI is also giving a wide selection of sounds, such as Massive, Monark, FM8, an extract from the Reaktor and Kontakt Factory libraries, and five Maschine expansions that can be further added to with the included two vouchers. This is rounded out with their fantastic effects Raum and Phasis, which are a reverb and a phaser. 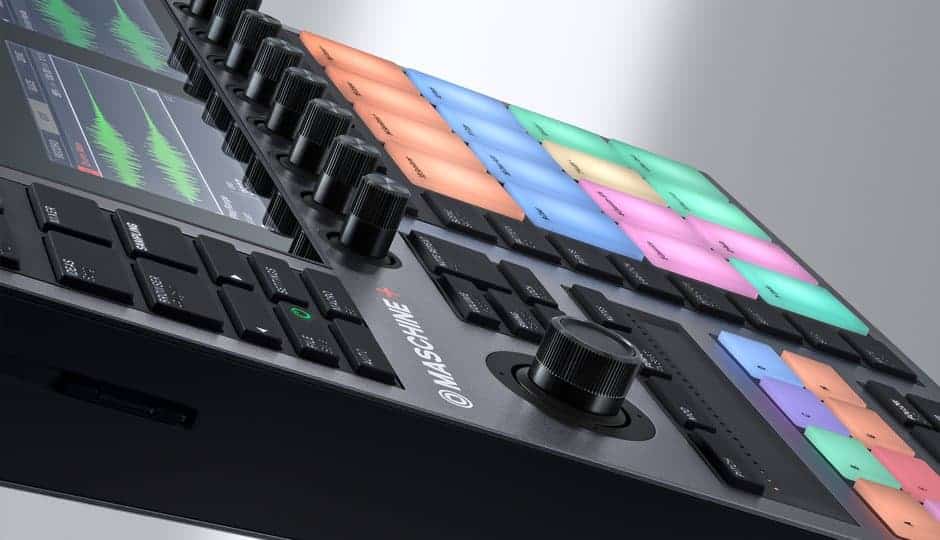 Now, these are in no way bad products – these are some of the most classic and iconic sounds NI have ever put out. But a lot of them have been on offer with previous Maschine devices, including Massive. For this much money, surely, the inclusion of Massive X wouldn’t break the bank?

Another thing you might’ve noticed is that there are no plugins intended for mixing. Previous iterations came with at least a compressor and a delay. The multiple expansions are great, but stuff like The Reaktor and Kontakt selections are available from their free Komplete Start package, and Raum and Phasis have been available for free in the past.

Again, not saying they’re not good, just that a more extensive and more exciting library of sounds would’ve sweetened the pot.

Maschine+’s internal software also doesn’t allow for full implementation yet either, though that is invariably in the works.

If anything, I see this as a springboard platform for future iterations. While I’d love to own one, this is relevant to bedroom producers only if your bedroom studio is on your 4-story summer villa’s top floor.

As far as my money goes, I’d hold off on this one, or, at the very least on pre-ordering this. Maschine’s first generation is still very much usable, and NI has set a unique precedent with how well they support their older, legacy devices. However, it’s still unclear exactly what the final features will look, whether the current MK3 line will also be refreshed with at least some of these features, how the performance on the final version will be, etc.

Realistically, you’re always taking a slightly increased risk any time you’re investing in a significant technological leap forward. This is undoubtedly a premium product, and the price tag reflects that – 1299 EUR. For that amount of money, you can buy a current-gen Maschine, a copy of the soon to be released Komplete 13, and still have about 100 bucks left over.

Don’t get me wrong, this is all very exciting, but I’m more excited to see how this story develops instead of owning the device immediately. There’s also something to be said about possible diminishing returns on going completely DAWless.

Would the Maschine+ be resigned to being just a fantastic, failproof way to perform live, or will it usher in a new generation of fully immersive and self-sufficient devices? What are your thoughts on this new machine from Native Instruments?