Plugin Boutique is offering the iZotope Trash 2 ($99) and Ujam Carbon ($129) plugins as a free add-on with any purchase throughout September.

Another month is here, and so is another excellent deal from the people at Plugin Boutique, who are becoming the Robin Hood of music production. The company is doing its usual monthly freebie again, but this time with added grit.

If you buy anything at Plugin Boutique from now until the end of September, you’ll get not one, but two ways to add distortion to your music. One plugin comes from iZotope, and Ujam developed the other one. Let’s take a closer look at both of these freebies which would cost you $227 if purchased separately.

Trash 2 is iZotope’s popular multi-band, post-filtering, dual-stage distortion effect. It offers both factory and user-made waveshapes, boasts twenty different filter types, an FX section, and even cabinet and speaker emulations with its own IR loader. 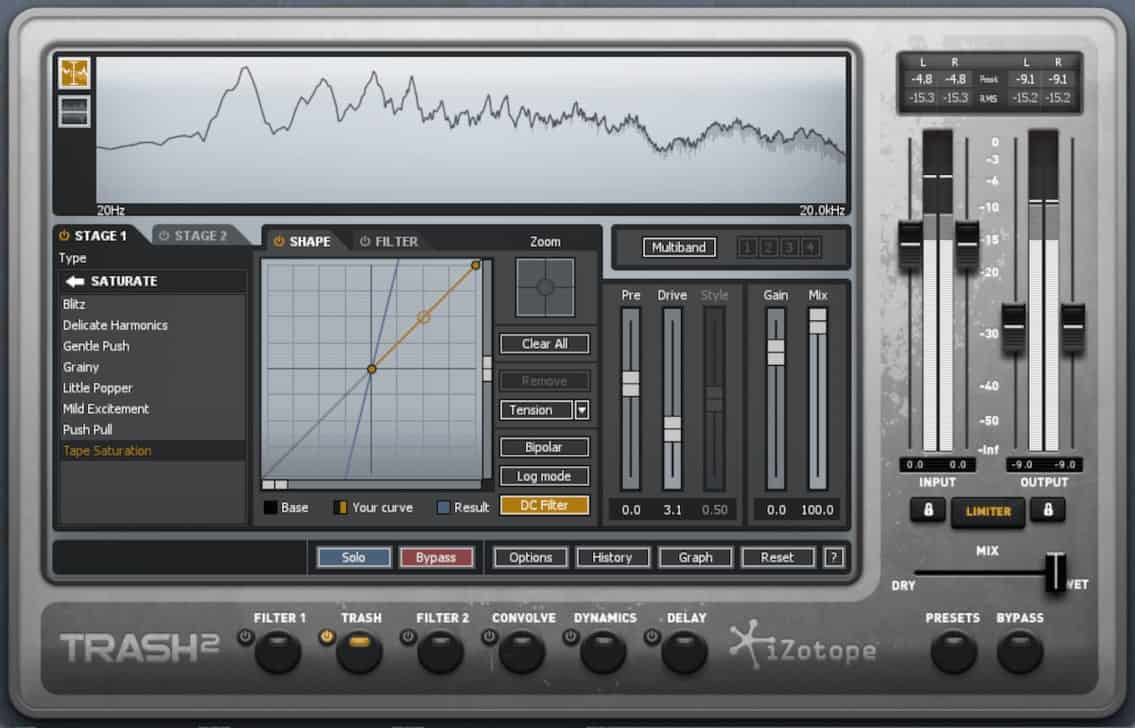 Trash 2 is a versatile distortion effect developed by iZotope.

The plugin has been used by clipping aficionados like Trent Reznor, Celldweller, and Butch Vig, producer of bands like Nirvana and Smashing Pumpkins and drummer for Garbage.

Trash 2 is anything but trash. It’s a gem among distortion effects and one that you should definitely get for free, given a chance.

The second part of the promotion features none other than Ujam’s virtual guitarist plugin, Carbon. The company has quietly been trying to replace the human factor in music recording with its line of virtual drummers, bassists, and guitarists.

That said, Carbon seems more geared towards TV and film composers. The instrument sort of sounds like Linkin Park is playing the DOOM soundtrack while sneaking into a bank in a blockbuster movie.

The instrument is incredibly versatile, featuring the sound of an 8-string guitar, and comes with a wide variety of presets, styles, and phrases. You can change the distortion’s intensity, the condition of the amp it’s going through, choose between a few different cabinets, and layer multiple guitars to emulate double-tracking.

The addition of a “Finisher” knob gives access to Ujam’s classic one-knob multi-FX, and much more. Speaking of which, the company is offering the Finisher as a standalone effect, which is also free.

Carbon is capable of generating a broad palette of unique, lush, and atmospheric sounds. The best thing about the instrument is that it’s workflow-oriented, so you can get great sounds out of it with a minimum amount of tweaking.

Whether you choose to distort, overload, mangle, or utterly destroy your music, this month’s Plugin Boutique freebie bundle has you covered.

To claim your free copy of iZotope Trash 2 and Ujam Carbon, make any purchase at Plugin Boutique this month (here’s their Deals page) and confirm that you want to receive the gifts at checkout.

See you next month!