Ashen Scoring Cello is an intimate a solo cello library for Native Instruments Kontakt and the free Kontakt Player plugin. The library is on a 28% OFF intro sale for $99 ($139 regular price) until October 20th, 2020.

Wavelet Audio’s new Ashen Scoring Cello library consists of two instruments for Kontakt. The first one is a conventional virtual instrument that lets you play individual articulations and build performances from scratch. The second one is a magical box of pre-recorded cello performances that you can mix and match to create new parts.

Let’s take a closer look at both instruments and some of the other goodies that are included in the library.

The first part is simply called Ashen Scoring Cello, and it is a standard virtual instrument with twelve cello articulations. This is the mode you will use if you want to play a melody with a MIDI keyboard or compose using the piano roll in your digital audio workstation.

Wavelet Audio provided the usual set of cello articulations like pizzicato, spiccato, and sustain (check the screenshot below to see all twelve articulations). However, there are several rather unusual articulations to choose from, too. 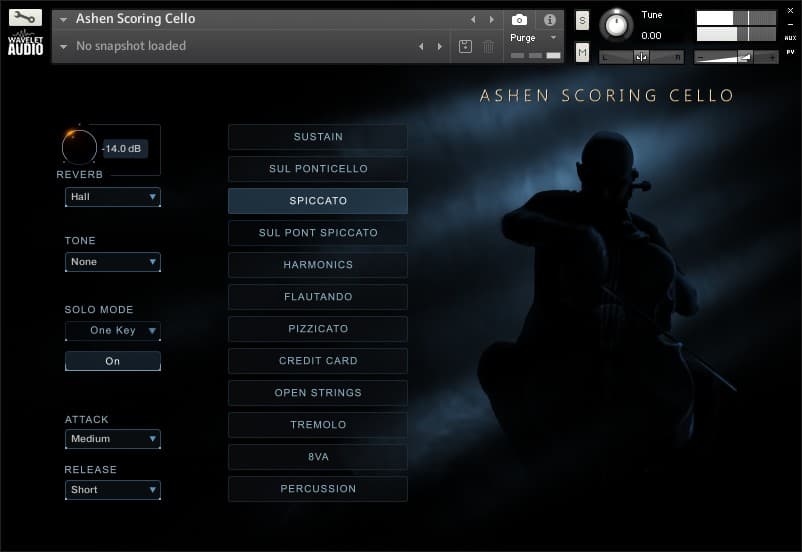 For example, there’s an entire set of samples where a credit card was used to play the strings. This articulation has an unusually snappy attack transient that works great as a melodic percussion instrument.

Each articulation comes with a custom set of controls for fine-tuning the instrument’s properties.

All twelve articulations also have a reverb control. The built-in reverb (powered by the Kontakt engine) has room and hall modes with adjustable volume, or you can bypass the effect altogether.

Turn the built-in reverb off, and you get a completely clean, meticulously sampled cello that you can use as-is or pair with your favorite third-party reverb plugin. This is when the Ashen Scoring Cello sounds its most intimate and where the amount of attention to detail that went into sampling this instrument comes into focus.

Although the team at Wavelet Audio states that the Performance Designer is not conceived to replace a “live” cello player fully, it definitely gets close. They intended to create a unique “performance mode” that can complement the arrangement with musical textures.

The Performance Designer can trigger up to five musical loops that can play simultaneously or solo. The user can manually pick the parts from a library of pre-recorded melodies, harmonies, percussive loops, and musical textures. Wavelet Audio also included a set of presets (provided as Kontakt snapshots) that you can use as the starting point for building your own Performance Designer stacks.

For an amateur musician like myself, someone with no musical education, playing the Performance Designer almost feels like magic. With just a few mouse clicks, I could combine various musical elements to create cello parts that I would never be able to play myself. You know that an instrument is exceptionally good when you find yourself playing it for hours, even though you intended to test it for thirty minutes.

Of course, a skilled composer will undoubtedly find a more practical use for the Performance Designer. It can be a tremendous workflow booster when working on a scoring project by providing ready-made musical elements to support the main solo performance.

Performance Designer can be used in many situations and for many purposes. For example, you can create a basic harmony and then add your own melody using playable instruments on top of it. Or, you can create intriguing rhythmic patterns that will perfectly complement the basic rhythms of the composition.

As a bonus, Wavelet Audio included a collection of sound design samples that are located inside the WAV folder. You can simply drop them in your DAW and use them as sound design tools and sound effects.

It is a small SFX collection, but with some very useful sounds. There are several risers that can work as tension builders in a trailer or risers in electronic music. You’ll also find a bunch of cinematic impacts and some pretty cool whoosh noises that can work as quick transitions in a modern trailer score.

The performance loops are also available in the WAV folder. They are organized into four subdirectories by BPM, and all filenames are clearly labeled with key and articulation info. If you prefer using audio loops in your DAW, this folder is a goldmine of cello performance to use in your next scoring project.

An Intimate-Sounding Cello With A Modern Tone

When it comes to tone and character, Ashen Scoring Cello is best described as intimate-sounding. It is a close-room instrument that almost begs to be played with emotion and expressiveness.

Of course, since the source samples aren’t drenched in reverb, the user has a tremendous amount of flexibility to mix the instrument to their liking. You can always use additional reverb to add a bit of grandeur to the sampled instrument and place it in a different sounding space.

With so many sampled orchestral cello libraries already available on the market, it appears that Wavelet Audio decided to offer a virtual cello with a slightly more modern tone. Although it can be used as a classical instrument, the Ashen Scoring Cello has a post-classical ring to it, with obvious industrial and ambient influences.

The library is perfect for modern cinema scoring and trailers, horror soundtracks, and really any piece of music that needs a touch of that unique solo cello magic.

The artist whose performance was captured for the Ashen Scoring Cello is Alder & Ash, and Wavelet Audio recorded the library in Montreal, Québec.

Say No To Machine Guns!

Another reason why Ashen Scoring Cello sounds so natural and “real” is the way Wavelet Audio approached the task of sampling repetition notes. One of the most challenging tasks when building a sample-based virtual instrument is avoiding the so-called “machine gun” effect. This occurs when the same (or a very similar) sample is played successively, resulting in a very unnatural sounding performance.

The team at Wavelet Audio avoided this issue by using the “Repetition Sampling” technique. They didn’t record one-shot samples of the cello one-by-one. Instead, they captured real performances of repeated notes and took the individual pieces from those “authentic” note repetitions. The result is a virtual instrument that sounds more musical when playing quick repetitions, with increased tightness, and natural-sounding transients.

Wavelet Audio is offering the Ashen Scoring Cello for $99 until October 20th. After that, the price will be $139 for the full library.

Ashen Scoring Cello is compatible with the free Kontakt Player, which means that you don’t have to purchase the full version of Native Instruments Kontakt to use the instrument.

So, the price of $99 gets you a versatile and wonderfully sampled cello that fits many genres and offers plenty of inspiration with its Performance Designer. And for a free taste of the sampling quality that Wavelet Audio has to offer, check out their excellent Hard Drum Loops that you can download completely free of charge.

Ashen Scoring Cello is perfect for modern cinema scoring and trailers, horror soundtracks, and really any piece of music that needs a touch of that unique solo cello magic.