move.ment was developed in collaboration with DaHouse Audio and Arthur Joly, a well-known synthesizer builder from Brazil. You can check out some of Arthur’s fantastic synth projects here.

But let’s rewind a little bit. KIA released a virtual instrument? The car manufacturer? What?

Yes, as surprising as this may seem, KIA developed a software synthesizer and used it to create the in-car sounds for the new Kia EV6 electric vehicle.

The company also collaborated with four artists to create a music album that “increases activity in the parts of the brain connected to creativity.” I’m sure James Blunt wasn’t involved in the project if that’s the case.

Back to the instrument, move.ment is a simple monophonic sample-based virtual synthesizer. It features a single VCO, a resonant low-pass filter, two ADSR envelopes, and a built-in reverb effect.

This concept works surprisingly well. The simple electronic sounds generated by the VCO sound a lot more organic in combination with the included nature sounds and the built-in reverb.

The instrument comes with close to 100 presets and lets you save your own creations for later use.

“The sounds of movement in nature produce what’s known as pink noise. This increases the alpha waves in the brain, inducing the flow state of consciousness, the state in which the brain is at its most creative. These natural sounds were recorded all over the world and used to develop the one-of-a-kind instrument, that we call move.ment.” 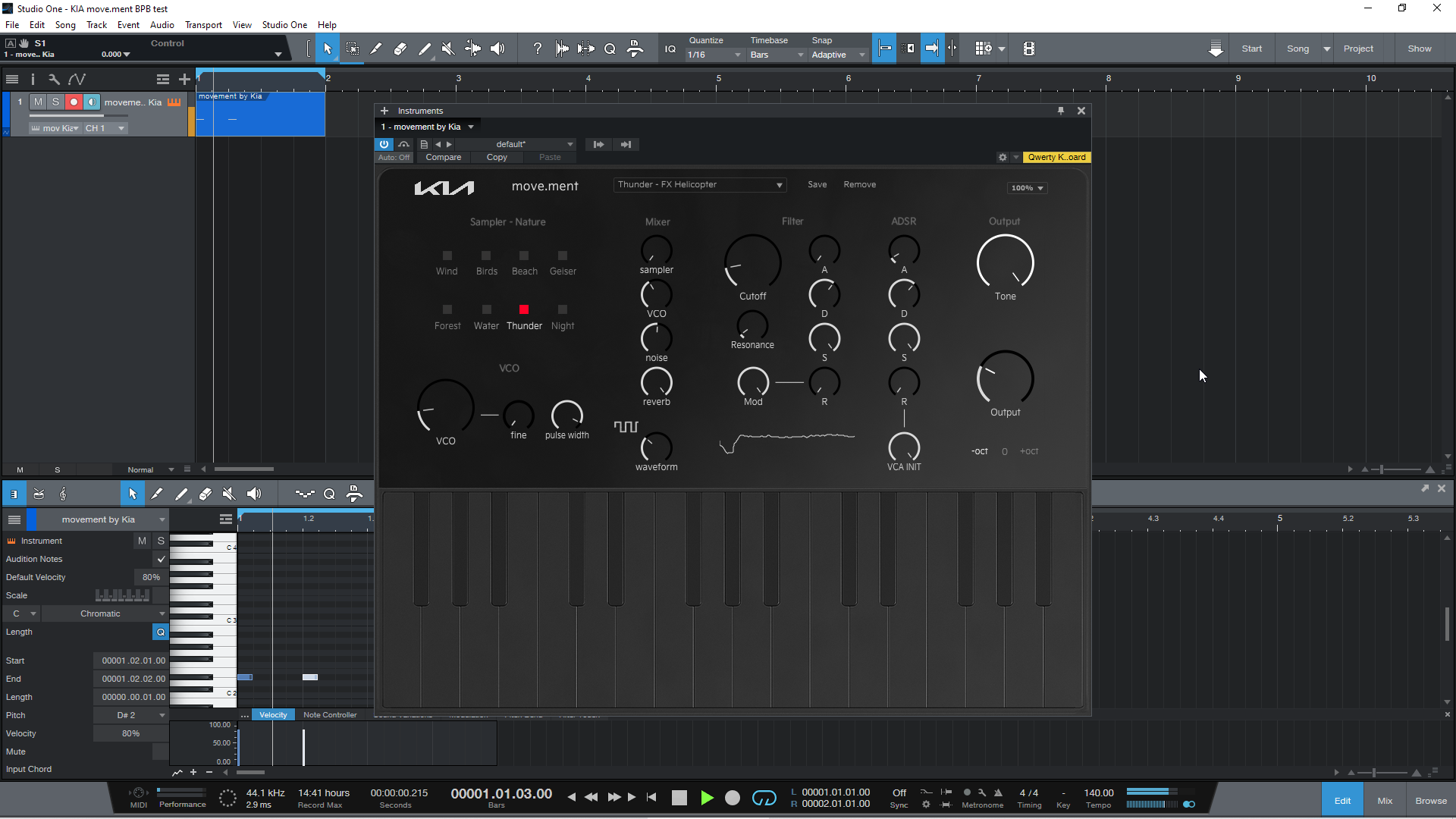 KIA move.ment running as a VST2 plugin in Studio One.

While it doesn’t bring anything new to the table, I’d say move.ment is worth checking out. I mean, you don’t get a virtual instrument from a car manufacturer every day. And honestly, I’m surprised Tesla hadn’t come up with this first. Kudos to KIA for putting an actual effort into this and not just making some totally unusable piece of software.

move.ment won’t blow you away by any means, but it can generate some interesting layered sounds and maybe provide just enough inspiration to start a new track.

UPDATE #1: Actually, move.ment is available as a VST2 plugin. The installer will place a DLL file in the default VST2 plugin folder on your hard drive. This isn’t mentioned on KIA’s website so I had no idea at first until I launched Studio One and noticed a new plugin called move.ment. The big question now is if other plugin formats are also available. Please post a comment if you find a VST3 or AU version of the plugin in your DAW.

UPDATE #2: Ok, the installer extracts VST2 and AU plugin files along with the standalone version. Thanks to our reader Bob for the info.

So, now that KIA developed a virtual instrument, who do you think will be the first plugin developer to manufacture a car? I’d buy a car from Arturia, as long as it offers four-wheel drive and Eurorack compatibility.