Today’s edition of BPB Freeware Studio features a list of the best free bitcrusher VST/AU plugins for Windows and Mac.

A bitcrusher is a very straightforward type of effect – it simply reduces the bit depth of the processed audio signal, resulting in audible degradation. It’s a very “digital” sounding type of distortion which works well for a variety of mixing and sound design tasks. Slight amounts of bit reduction can make sampled drums sound more crunchy and crisp, an effect that’s reminiscent of old-school hardware drum samplers like the legendary E-mu SP-12. Of course, higher amounts of bitcrushing will result in more distortion, suitable for creating distorted bass sounds, glitchy sound effects, etc.

Despite the fact that bitcrushing is a straightforward effect, there’s definitely some contrast in sound character between various bitcrusher plugins, probably due to the different algorithms being used “under the hood”. Also, some plugins come with neat extra features like sample rate reduction, smoothing, modulation, and various other goodies. Thus, I’ve decided to make a big list of all useful freeware bitcrushers I know of and let you choose your own favorites from the bunch. There’s some well-known stuff in the list, but also some gems I’m sure you’ve never heard of!

Krush by Tritik is my favorite free bitcrusher plugin right now. Providing a combination of bitcrushing, clipping, downsampling, and filtering, it’s a versatile distortion utility that sounds great and is very easy to use. Available for both PC and Mac, perfectly stable and nicely designed, it’s a highly recommended addition to anyone’s VST plugin arsenal.

Before the excellent Krush effect was released by Tritik, my bitcrusher plugin of choice used to be CMT Bitcrusher. Due to its slick interface design and ultimate ease of use, I still tend to reach for it when I need to apply some harsh digital distortion to a signal. Most of the time it works perfectly. 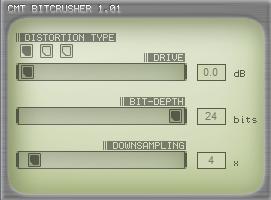 If you want a more subtle effect, TimeMachine is a very good choice. It was designed as an emulation of those famous vintage samplers like the E-mu SP-1200 and such. In fact, it works very well for this, try using it on drums and notice how it adds harmonics and makes the samples sound slightly more punchy. Of course, you can always push it harder and use it to crush the hell out of things. 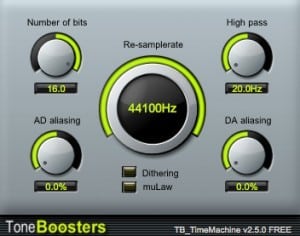 Ok, but how about a  multiband bitcrusher? If you like that idea, check out Multiband Bitcrusher I and thrummaschine, both of which are 3-band bitcrushers with some pretty neat extra features up the sleeve.

As I said, all the plugins in the list have something unique about them, so I encourage you to check them all out and keep the ones you like. It would be cool if you could leave a comment saying which ones you liked the most. Also, if I’ve missed mentioning a good freeware bitcrusher, feel free to leave a link in the comments section!

And that’s pretty much all for today. Have fun bitcrushing, spread the word about this article and thanks for reading BPB!