After almost twenty years of ongoing development, the latest version of Acoustica’s Mixcraft Pro Studio has earned its place on the front lines of the digital audio workforce, and proved to be a serious contender in a gathering storm of fierce competition.

Building on the strengths of its award winning predecessors and focusing on the concerns addressed by their loyal consumer base, Acoustica’s Mixcraft Pro Studio 7 just might be the most intuitive audio production suite on the market, featuring full 32 and 64-bit compatibility, as well as internal bridging of 32-bit plugins within the 64-bit version.

The program has a clean, streamlined GUI that doesn’t feel overly cluttered or become an eyesore after hours of use. The learning curve is slight. The controls do what their labels clearly indicate. Things are exactly where you expect them to be, and they do what you expect them to do — and more!

The library is easy to navigate, with a massive index of thousands of royalty-free loops, samples and various sound effects, all of which can be downloaded on-demand from Acoustica’s servers.

A new step sequencer appears next to the piano roll editor under the “Sound” tab whenever a sound file or instrument clip is loaded in the main window. Plus, you can even write scores in traditional musical notation, which allows for close collaboration between electronic artists and classically trained musicians.

Another major selling point is a vast assortment of instrument plugins, including four exceptional virtual analogue synthesizers developed by Memorymoon, such as the ME-80: a faithful emulation of the legendary Yamaha CS-80 used by several notable artists.

Effect plugins are in no short supply, with Acoustica’s own factory bundle and several others, including their Pro Studio Reverb — one of the most natural sounding native reverbs I’ve ever heard — and some brilliant third-party plugins from Izotope, Pentode, G-Sonique and Tone Boosters.

But those are just the trimmings. One of the most exciting new features available in Mixcraft 7 is the “Performance Panel”, a highly innovative playback grid wherein lanes referred to as “Sets” can launch multiple sound files and/or instrument clips with a single mouse-click or external hardware midi controllers such as the Novation Launchpad, opening up a world of new possibilities for live applications. 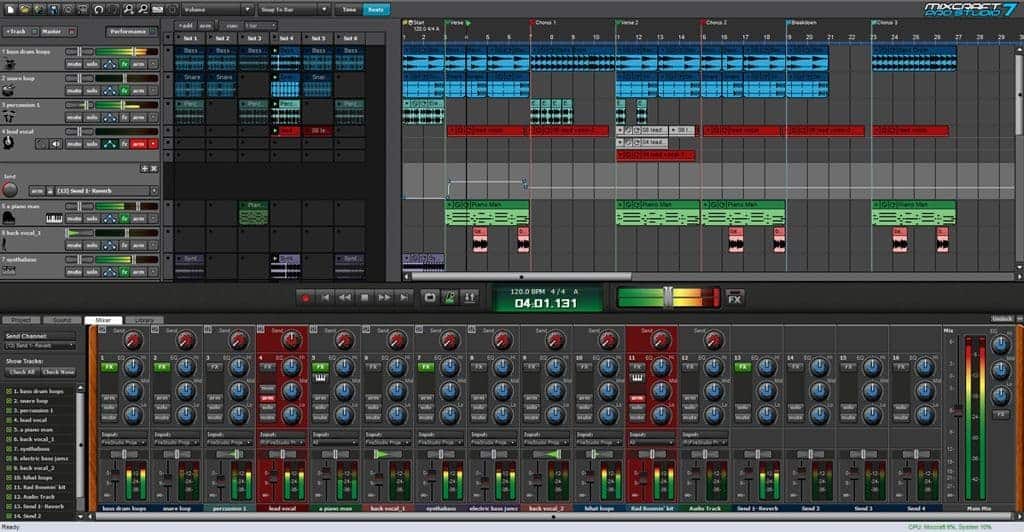 Included in the Performance Panel are controls for adding set locations and a “Solo” button that mutes clips in the main window for exclusive playback of audio and instrument clips within the performance grid only.

Warping is now possible within the audio clip editor under the Sound tab, featuring an “Autowarp” function with four allotted strength settings for desired accuracy and placement of each warp marker. Also, you can slice audio files in accordance with adjustable time-signature controls, warp markers or even detected transients and drop them in the Performance Panel using the “Slice To” button. Plus, you can slice to the current track or even to the Omni Sampler if you prefer.

Automation is a breeze with a toggle button that displays a collapsible column providing access to a potentially unlimited number of targets for quick and easy manipulation of individual parameters on the fly.

The only substantial issues I feel a need to address are …

Sidechaining is not built into the program itself. Rather, a sidechain compressor effect is included for this purpose. Unfortunately, this limits sidechaining functionality strictly to the overall volume of a mixer channel. I often route a sidechain signal to a frequency band within an EQ, or perhaps to a filter frequency cutoff control. In future releases of Mixcraft, I would like the ability to route a sidechain signal to virtually any parameter within the native interface.

There are no point handles or Bézier curves available for automation clips. It would be nice to have more control over transitions without having to add several individual points. Of course, I’m not a huge fan of point handles. I find them overly fussy and they tend to restrict workflow. So, just a simple adjustable curve would be fine with me.

The Alpha Sampler could benefit from a few tweaks. A full ADSR envelope would certainly provide more control over the dynamic range instead of the Attack & Release envelope we currently have. Also, the “Speed” control for the mod wheel is a nice feature, but some of us don’t have a mod wheel, which means we can’t modulate the note pitch or filter frequency without automating it.

The Omni Sampler also has similar limitations. Of course, my biggest concern has more to do with routing. Unfortunately, you’re unable to send each individual sample to it’s own separate mixer channel, but I’m more than certain this feature will be included in future updates.

Other than that, I really can’t think of anything that Acoustica hasn’t thought of for me. Considering the huge improvements upon Version 6, I’m very excited for what future development has in store for Mixcraft users, and I am very happy and proud to be among them.

The good people at Acoustica have all worked very hard to bring us this new release, and they’ve managed to put together a shining example of a user-friendly workstation. Their slogan says it all: “Software should be easy to use”. If you’d rather spend time working on your tracks instead of browsing through technical manuals, Mixcraft Pro Studio 7 is the perfect blend of simplicity and sophistication.

Mixcraft Pro Studio 7 can be purchased for $164.95 via Acoustica.

As of June 21, 2015, v7.1 b279 was unleashed, with a long list of bug fixes, improvements to their high performance audio engine, plus several new loops and drums samples you can download directly from Acoustica’s servers in the factory library. New additional content includes nine loop kits produced by LA-based producer DJ Puzzle and 213 drum samples provided by Shock of LA-based electro swing band Red Light District. The result is over four hundred exciting new sounds spanning a wide range of musical genres just waiting to be dropped into your samplers and drum machines.

I could provide a more detailed list of bug fixes and performance tweaks (available here) but I’ll spare you the history lesson and just assure you that Acoustica’s flagship audio production suite is now more stable than ever. I’m actually very impressed by the crystal clear transparency; whatever they’ve done with the audio engine, they’ve done extraordinarily well. Mixcraft 7.1 has become my go-to recording software. It’s easy and fun to use, incredibly versatile, and also very affordable. I really can’t see a downside here. So, go check it out for yourself at Acoustica’s official website (linked above).

Acoustica has kindly provided a free copy of Mixcraft 7 as a prize for one lucky BPB reader.

The winner is FRANKIE (frankienukemusic on SoundCloud). Congratulations! :)

Acoustica will get in touch with the winner, with further information on how to claim the prize.

Thank you all for entering the giveaway and here’s another big thanks to Acoustica for providing such a cool prize for BPB readers.

If you'd rather spend time working on your tracks instead of browsing through technical manuals, Mixcraft Pro Studio 7 is the perfect blend of simplicity and sophistication.