Game Boy Drum Kit is a free collection of 8-bit drum samples which were recorded from a black Nintendo Game Boy running LSDJ software. All of the included samples are 100% dry and unprocessed, apart from the fact that they’ve been recorded through a compact tube preamp.

This free sample pack is the result of several long scripting and editing sessions, as well as an unexpected collaboration with SzcZ (aka Fairly Confusing Waveforms). Fairly Confusing’s amazing NI Kontakt instruments have been featured numerous times in our news section (Bleepman is a recent example) and having him on board for this freebie sample pack has been a huge pleasure.

Game Boy Drum Kit contains 64 drum samples in total, all of which are included as 24-bit WAV files (44.1 kHz). The download pack also includes a set of NKI patches and a simple SFZ patch which is there to help you quickly load up the samples in any SFZ compatible instrument. All of the included sounds were made from scratch in LSDJ and they are provided royalty-free for use in music and video production (both free and commercial).

While creating the drum sounds in LSDJ, I’ve tried to come up with as many different types of drum hits as possible. Some of the included hits are quite unlike what you’d normally expect to hear from a Game Boy, especially some of the snare drums which sound quite C64-like (they were built in the wavetable editor in an attempt to recreate the classic Rob Hubbard SID chip snare sound). Apart from a whole bunch of drum samples, Game Boy Drum Kit also contains a nifty bonus collection of SFX hits, arpeggios and some lovely pulse wave bass sounds.

The pack contains two different types of NKI patches. The first one is a rather simple affair, with on-screen controls for the filter, volume envelope, a reverb, and a delay effect. It also features a bitcrusher which is linked to the modulation wheel. You’ll find three variations of this NKI patch in the download pack, one containing all of the samples mapped across the keyboard and two additional ones that work as mini drum kits.

The second patch called Game Bot was created by Fairly Confusing Waveforms and it’s incredibly awesome and at the same time not very easy to describe. Your best bet is to check out the demo video below and see it in action. Game Bot is sort of an experimental drum machine that is powered by the Game Boy Drum Kit sample set. A brief but informative user manual is included in the download pack, to help you make your first steps with the instrument. This demo video by Fairly Confusing Waveforms might also help.

Game Bot is tons of fun to use and I’ve spent quite some time jamming with it. Apart from the brilliant sequence generator and a set of hands-on performance controls, the patch also features a handy sequence manager which can be saved to use your work for later. Very cool! 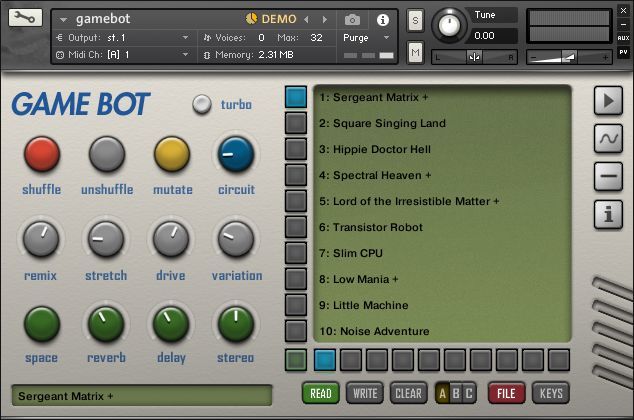 This is Game Bot, the drum machine NKI by SzcZ.

And that’s pretty much it. I hope that you’ll enjoy this freebie pack! If you like it, you’ll probably also like our Commodore 64 Synthesizer Sessions DELUXE sample pack. A huge THANK YOU goes out to SzcZ for joining in and delivering an awesome NI Kontakt instrument for this free Game Boy sample pack.