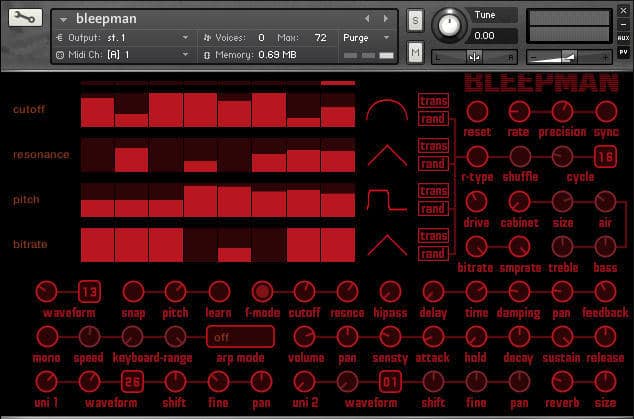 I’m assembling a new bleeping device in Kontakt, last one was so twisting complicated, I’ve been getting lost in it myself. I wanted to re-utilize the engine, but simplify things a lot and add some new twists. I’ve got working ‘beta’ version, if you’d like to try it out.

Bleepman is suitable for generating old school video game sounds, although these classic 8-bit sounds can be further tweaked using filters and other effects like delay and distortion. The instrument is built around four step sequenced LFO generators which are used to modulate various aspects of the synth engine, namely filter cutoff, resonance, oscillator pitch and bitrate.

This can lead to some rather interesting sequences, especially if you enjoy using instruments which offer a bit of randomness. The developer intentionally didn’t include the manual for this instrument. The idea behind releasing the current beta version is to see if the interface is intuitive enough to be controlled without any instructions.

The instrument supports automatic generation of sequences, which can be loads of fun. For example, you can use the random generator to create a random pitch sequence and the generator can be forced to follow a certain scale. Pretty cool. Bleepman also supports saving and loading of presets, so you can always save your settings for use in another project.

Check out the Bleepman demo video: