One Small Clue has announced that Grace, their brilliant workflow-oriented sampler VST plugin for Windows, is now re-released as a freeware virtual instrument. It is one of the best free VST instruments you can download right now.

Grace was introduced in October last year, as a commercial product priced at $29. As of today, the full version of Grace is being offered as a free download on the One Small Clue website, without any feature limitations.

This is the original, non-restricted version of Grace, an excellent software sampler that is optimized for a quick and efficient workflow.

Grace’s user interface is streamlined and clean-looking, sporting a neat silver/blue color scheme that won’t become an eyesore even after several hours of continuous use.

The instrument’s structure should look quite familiar to pretty much anyone who’s used a sampler before. It is laid out into four main sections: the patch browser on the left, accompanied by the sample editor, the voice controls, and the modulation slots on the right. The sample mapping panel is tucked away in a separate tab, accessible by clicking the “Sample Map” button located right above the sample editor window.

Hovering different parts of the interface displays various visualization aids as an overlay on top of the sample editor window, which is a really cool touch. For example, hovering the mouse pointer over the filter section activates a spectrum analyzer overlay in the sampler editor, whereas hovering over one of the ADSR envelopes shows the envelope diagram. Pretty neat!

Everything about the user interface and its layout is pretty much self-explanatory, apart from a few minor UX issues that took me some time to figure out. For example, I was wondering for a while how to zoom in on the piano roll in the sample mapping panel, since the zoom in/out buttons are nowhere to be seen.

After creating several patches, I’ve accidentally figured out that the vertical scroll bar on the right side of the piano roll actually controls the horizontal zoom. It’s just a minor UX issue really, and I totally got used to it as soon as I realized how that works, but it goes to show that the interface could do with just a tiny little bit of extra polish.

The workflow is quite possibly the best trait of this wonderfully compact sampler instrument.

Following a similar workflow ethic like the one we’ve seen in One Small Clue’s amazing Poise drum sampler, every possible action can be achieved in no more than just a couple of clicks. Building an entirely new preset from scratch (with modulations and everything else) is most often done in a matter of minutes.

Compared to various more powerful (and quite often needlessly over-bloated) sampler instruments on the market, Grace is an absolute joy to use. Granted, it does have its limitations (more on those below), but it is the perfect tool for handling a substantial percentage of everyday sampling tasks. 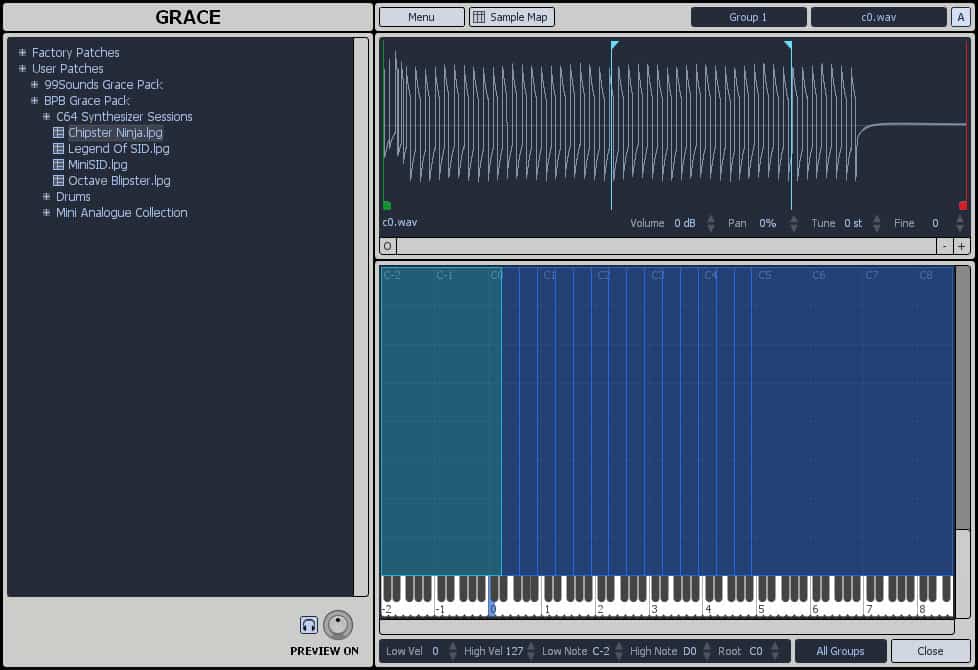 Take a closer look at the sample mapping editor in Grace.

To build a new patch, simply open the mapping panel and drag the samples onto the piano roll. You can also import the samples by loading an SFZ patch. Each imported sample will create a new sample zone, and these can be stretched across the keyboard, stacked into velocity layers, and tweaked using volume, pan, and pitch controls.

It is also possible to create multiple sample groups that can be layered together. However, round-robin is not supported. The lack of round-robin support (or random sample playback) is probably the instrument’s most significant drawback at the moment, and it would be fantastic if one of the future updates would add this useful option to the plugin’s feature set.

The voice control section features standard sample playback controls, along with two filter slots (2-pole and 4-pole HP/LP/BP filters, a comb filter, ring modulator, and a bitcrusher) that can be blended together in a serial or parallel connection.

I was pleasantly surprised by the legato mode implementation. It works exceptionally well for adding portamento to sampled lead sounds. All of the available filter models sound very nice, and the comb filter is loads of fun when used with percussive sounds and other short samples, especially if you modulate its frequency by an LFO.

Speaking of modulation, the mod section in Grace is really well-thought-out and easy to use, even though it might seem a bit intimidating at first.

To set up a modulation connection, pick one of the available modulation slots and then either CTRL + click a knob, or simply drag the outer edge of a knob. A light-blue colored shadow shows the amount of applied modulation. That’s all there is to it! You can also modulate a modulation source by another mod source, or temporarily mute a specific modulation source without deleting its assigned connections.

Generally speaking, playing around with modulation slots in Grace is an easy way to add depth and variation to static samples, especially once the two available step sequencers and the XY pads come into play. The step sequencers are very neat, as they can be used to create cool glitched-out noises and even some basic arpeggio patterns.

If you feel confused at any point while using Grace, you can access the user manual right from the main menu. The user manual is well-written and clearly explains all of the plugin’s features. You probably won’t ever have to use it at all, but it’s still good to know that a handy set of instructions for a new instrument in your plugin arsenal is just one click away.

Although most users will probably take advantage of the instrument’s quick and easy workflow to build their own patches from scratch, it’s worth noting that Grace comes with a fantastic factory library created by WaveShaper. It includes over 400 individual samples, covering electronic drum kits, sound effects, pads, and vintage synthesizer sounds.

The factory pack is distributed as an executable file, which will automatically install the presets and samples into the factory patches folder. The quality of the provided sample content is absolutely top-notch, nothing short of what you’d typically expect to hear in a WaveShaper sample library. It is also a great way to get you started with Grace and to see some of its characteristic features in action.

There’s little doubt that Grace is the best free sampler on today’s VST plugin market. Shortcircuit 1 by VemberAudio has been a long-time favorite of mine, but it’s an abandoned plugin that won’t work in 64-bit host applications.

Grace, on the other hand, works on both 32-bit & 64-bit Windows applications with VST plugin support. It is a stable and compact sampler with a great, streamlined workflow and a robust feature set.  It’s the sampler that you’ll think of first when you need to import some of your samples into a project.

Some users won’t like the lack of round-robin support. However, Grace will be more than capable of completing the majority of everyday sampling tasks. This virtual instrument is a wonderful gift for the freeware community, and we can’t thank One Small Clue enough for it!