Weighing in at more than 13,000 samples and 5 GB of disk space, Shreddage 2 IBZ ($139, or $119 for owners of Shreddage 2, $99 intro price) is a serious, big and detailed sample library for Kontakt and Kontakt Player, made with metal in mind. The samples are of a custom-built Ibanez 7-string guitar tuned to drop G.

When sampling all 25 notes on each of the seven strings on this guitar with a variety of playing techniques, the number of samples multiplies pretty quickly. There are sustained, muted and staccato single notes and power chords (with up to six different degrees of muting from loose to very tight), pinch harmonics, harmonics, hammer-ons/pull-offs and tremolo notes. There are also various scrapes, squeaks, slides and other noise effects. The sustained notes are sampled in three versions: normal, hard, and with vibrato. Count four round robins for a lot of these articulations and add note release noises, and it’s easy to see why there are so many samples. So, if there’s one thing this sample library gives you, it’s lots of different ways to play every note.

In a word, bright. All samples are recorded clean and direct, so there’s no pre-baked distortion, and the sound is consistently bright and aggressive across all the different articulations and across the whole fretboard. There’s a pretty good amount of pick noise, especially for the hard sustains where you can even hear the pick smack into the neighboring (muted) string sometimes, plus release noises. The lowest note on the lowest string is a G, which is only a minor third higher than the lowest note on a standard 4-string electric bass. This is obviously suitable for metal, and testing IBZ I found myself digging up old Danzig and Darkthrone riffs that I probably haven’t played since the 90s. The tremolo articulation definitely does raw black metal well. One thing that sparked my interest, though, is reading a comment on the KVR forum that said this is a good guitar for country. Well, it sure is. When going through a clean amp, it can get plenty of twang, and the extended low range also lets you dip into tic-tac bass territory.

The brightness and brashness also make it good for funk, and it’s lots of fun to throw an auto-wah (envelope-following filter) effect on it. The muted samples of high strings are very useful for funk, too, as are many of the miscellaneous noises. Run through NUSofting’s DeepBoard effect (a classic free VST), it even does a decent imitation of an acoustic guitar. I tried replacing a guitar in a couple of projects I’m working on right now with the IBZ, and the sound immediately got a lot brighter and less polite. So, is there anything this guitar doesn’t sound good for? Well, sounding smooth and mellow is definitely not its strength, even if you use EQ to turn the treble down, so jazz or polished pop are cases where it’s much easier to do the job with a different guitar library. The lack of velocity layers, with only the sustain notes having two, is also not that realistic when playing notes with a wide dynamic range through a very clean amp. It’s definitely a great guitar for metal and rock, though, and also for any other genres where a bright, raw sound is a good thing.

The interface has six pages of controls: perform main, perform advanced, articulations, engine, effects and advanced. That’s a lot of stuff. Fortunately, hovering over any knob or switch displays an information message which explains what it does, and if you have a basic understanding of how a guitar works, it should all make sense. The most important one is the articulations page, which controls which articulations are triggered, and how. This is quite flexible, as articulations can be turned off entirely, or controlled by velocity, keyswitch, or MIDI CC. The default configuration is muted notes on low velocity, sustains on higher velocity, and pinch harmonics on velocity 127, with noise effects on a keyswitch. It’s a good default for metal, though it took me a minute or two to get used to different velocities triggering different sounds instead of just harder/softer versions of the same sound. Vibrato is also on the articulations page, and has two versions. Fingered vibrato applies to sustained notes only, and is quite hard and wide – good for adding dramatic emphasis to a note or two in a phrase. Smooth vibrato applies to all notes and has controllable speed and width – good for adding expression to notes, though it goes both above and below the main pitch and it would sometimes be nice to have options which went only above (to simulate vibrato via string bending) or only below (like a non-floating trem bridge). Manual vibrato via pitch bend wheel is also possible, though, and you can do any vibrato you want that way with full control. 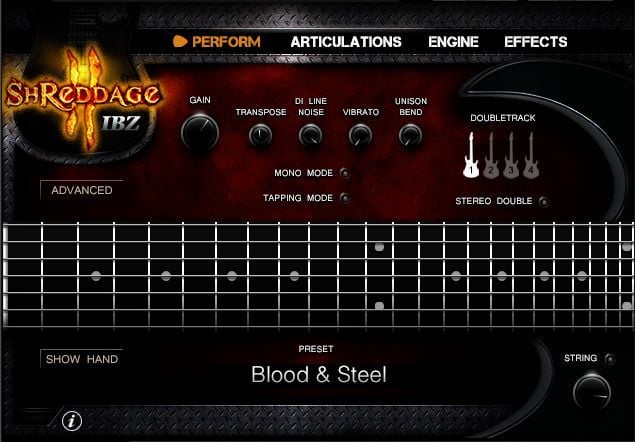 The other pages of controls are for things like fret preference, pick noise, velocity sensitivity etc. Release noises come in both pitched and unpitched flavors, and their implementation has one odd aspect – their volume is constant regardless of how long the note is, but they don’t appear at all on notes whose length exceeds the threshold that’s set. So, if you want the noise of muting the strings after the last sustained note of a phrase or a track, and that note is too long, you’ll have to add one of the noise FX sounds to simulate it. So, it’s worth understanding the behavior of the various controls in order to get the best out of the instrument. I won’t talk about each control individually, I’ll just say that if you like to dig deeply, you can tweak a lot of little details there and set the instrument up to your liking or to the specific needs of a track. I pretty quickly set it up for pop, with articulations controlled by keyswitch, pick and release noises reduced, and velocity sensitivity increased. These parameters can be controlled via automation, so you can have things like preferred fret position change during a track as needed for realism, or even the amount of pick noise if some sections need to sound rougher.

The effects page has not-so-few stuff, with a distortion effect, two amps, a nice selection of cabs, compression, chorus, delay and three parametric EQs (pre-amp, post-amp and post-cab). I suspect most users will want to use their own favorite external amps and effects anyway, but these actually sound quite good, so if you don’t feel like loading external effect plugins, you won’t have to.

With all those controls, it’s funny that there’s no tone knob, but it makes sense. All metal guitarists I’ve ever known always leave theirs turned up to 10 anyway. Other things that aren’t there are a strumming engine and a chord engine to translate typical piano chord voicings into guitar voicings. Those would also be pretty useless for metal, though having them would make the guitar more convenient for, say, jangly indie rock. As it is, you can strum all the jangly chords you’ll need with plenty of jangly sound, but you’ll have to take the effort to voice the chords right and time the strums appropriately.

There is very clever support for multi-tracking, though – you can have four instances of IBZ using the same round robins with each starting at a different point in the sequence, so they can play identical parts and each one will always play a different round robin variation of every note.

A library this large is going to be resource-intensive. Impact Soundworks recommend a 7,200 RPM hard drive or SSD, but with my 5,400 RPM drive it worked fine, though I haven’t tried to get more than two instances going at once. To save resources somewhat, all samples come in both 24-bit and 16-bit versions, so you don’t have to load 24-bit all the time. Disabling unused articulations also helps reduce RAM usage. CPU usage is not very high, not even with the built-in effects turned on. So, while it won’t load quickly and it’s not going to be easy on your hard drive, it won’t eat up all your CPU and you’ll be able to use your processor’s power for big FX chains if you want. Also on the subject of system requirements, it’s great that IBZ works in the free Kontakt Player – many producers of more guitar-oriented music aren’t going to need a whole lot of sample libraries of other instruments, so they probably won’t own the full version of Kontakt.

The first word Impact Soundworks use when listing the key features on their page is “brutal”, but I’d say “versatile” is the best word to describe Shreddage 2 IBZ. Though metal was the goal and its not a guitar for every application, Shreddage 2 IBZ is a great and very detailed library suitable for any music where being heavy-handed and aggressive is better than being smooth.

"Versatile" is the best word to describe Shreddage 2 IBZ. Though metal was the goal and its not a guitar for every application, it's a great and very detailed library suitable for any music where being heavy-handed and aggressive is better than being smooth.