Wave Alchemy has been one of the biggest suppliers of high-quality drum samples for almost a decade (the company was launched in early 2008), and Revolution could be their most impressive release to date.

Today we’re taking a look at Revolution which is Wave Alchemy’s take on the perfect virtual drum machine for Kontakt and Kontakt Player.

Although their focus was mainly on WAV format sample libraries in the early days, Wave Alchemy recently shifted towards releasing Kontakt instruments which tend to operate as fully-featured virtual drum machines. Revolution is an all-in-one drum machine featuring the sounds of 14 legendary analog and digital instruments, including all-time classics like Roland TR-808, Roland TR-909, LinnDrum, and Sequential Circuits DrumTraks, among others. One thing that should be noted right away is that Revolution is compatible with the free Kontakt Player sampler by Native Instruments. The full version of Kontakt is not required for using Revolution in your projects. The instrument also integrates with Komplete Kontrol keyboards and NI Maschine.

Unlike many other virtual drum machines available on the market, most of which synthesize drum sounds, Revolution is a sample-based instrument. This approach has its pros and cons, of course, the biggest advantage being that it captures the original, authentic sound character of the sampled instruments. Whereas a virtual synthesizer can only come that close to the original 808 sound, for example, Revolution is based on real 808 samples instead. Presuming that enough round-robin samples are provided, the resulting drum sequence should sound identical to an actual Roland TR-808. The biggest drawback of the sample-based approach would be the fact that the user has fewer options available for modifying the generated drum hits than one would do when working with a drum synthesizer, such as the Microtonic plugin by Sonic Charge. However, being that Revolution is marketed as the ultimate substitute for a line-up of classic drum machines, most users probably won’t be looking for new and “previously unheard” drum samples in this instrument.

It’s also worth noting that Revolution is a “modular” drum machine capable of combining different sampled instruments into one. In other words, one can create a virtual drum machine that features an 808 kick, a 909 snare, and DX toms, for example. 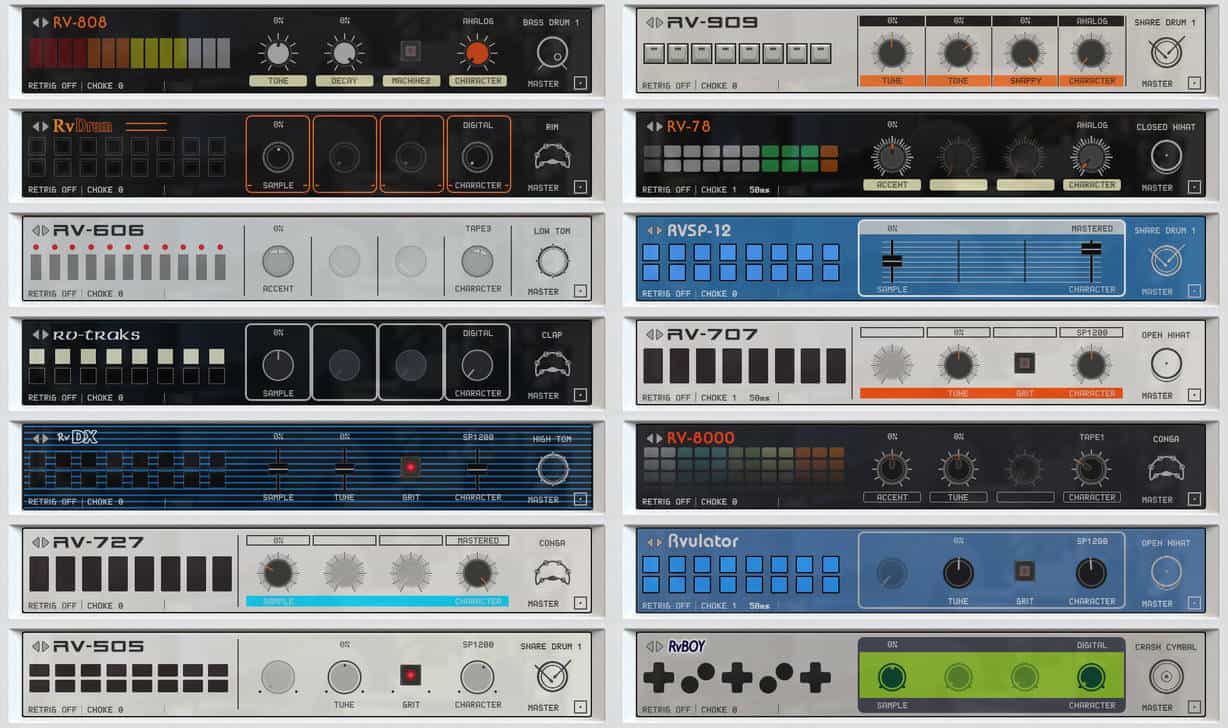 As expected from a virtual drum machine crafted by Wave Alchemy, Revolution is based on a huge library of premium quality samples. After all, creating deeply sampled digital copies of hardware drum machines is the company’s forte. The instrument boasts tens of thousands of sampled drum hits (including round-robin variations), along with 160 reverb impulse responses capturing the sound of several classic reverb units. Revolution occupies over 8 GB of hard drive space when installed. As mentioned above, different sampled drums can be mixed and matched together to create hybrid drum machines, or you can simply build a virtual 808, for example, by using only 808 drum modules. Wave Alchemy has also included several hundreds of patches to help new users get started with the instrument.

The thing that makes Revolution different from most other Wave Alchemy products (apart from the recently released Spectrum, Digital Revolution, and Transistor Revolution MKII instruments) is the fully customized Kontakt interface which turns a static drum sample library into a virtual drum machine that’s every bit as functional as the original hardware. The company’s latest release doesn’t disappoint in terms of available features, offering a virtual 14-track mixer with volume, pan, send, and solo/mute controls for each module, volume, filter, and pitch envelopes, parameter randomization (including sample start point randomization), a TR-style sequencer with adjustable swing, a modern multi-track sequencer, and a range of built-in effects including filters, transient shapers, and compressors, among others. Most importantly, the interface is logically organized into sections and separated into four panels, making it easy to tweak the locate and adjust any control. It is a vast improvement regarding the control layout and overall usability compared to Spectrum which looked great but was a bit too flashy for my taste.

As someone who enjoys collecting free drum machine samples from around the web and using them in freeware samplers like Grace and Grooove BPB, I appreciate the sheer quality and amount of drum sample content that comes with Revolution. Having everything pre-programmed and ready to use is a lot more convenient than having to map drum patches manually. Despite the fact that I already have thousands of drum machine sample packs and numerous drum machine plugins installed on my machine, I still spent a couple of hours playing with Revolution on the first run. It’s that fun.

For users who don’t already own a massive pile of drum machine hits on their computer, Revolution is a must. For everyone else looking for a source of high quality, authentic samples of classic drum machines, it’s one of the best choices around.

For users who don't already own a massive pile of drum machine hits on their computer, Revolution is a must. For everyone else looking for a source of high quality, authentic samples of classic drum machines, it's one of the best choices around.