Following a three year long break between versions 13 and 14, and a switch of ownership from Sony to Magix, VEGAS Pro seems to be back on track to becoming one of the most sophisticated non-linear video editing applications on the market.

The latest iteration of the software, VEGAS Pro 15, introduces a remarkable set of visual and functional improvements. It is also on sale until November 30th, 2017.

First introduced as an audio-only tool at the 1999 NAMM show, VEGAS Pro had come a long way to becoming one of the more popular non-linear video editors around. The video editing features were first added in 2000 (version 2.0 of the software), with annual updates being released by Sony all the way until version 13 in 2013. This was when the development stopped, leaving the existing users desperate for an update which would iron out the bugs, performance drops, and stability issues which occurred when using VEGAS Pro 13 on newer versions of Windows. Potential new users were also wary of jumping on board with an application which seemed closer than ever to becoming abandonware.

Thankfully, MAGIX took over the development in 2016 and released VEGAS Pro 14 not long after, fixing most of the bugs and stability issues reported by the users, along with adding some nifty improvements like 4K upscaling, RED camera support, and a higher video velocity limit. The core feature set hadn’t changed significantly, though, and it was still pretty much unclear in which direction the forthcoming updates would go. Was MAGIX planning to continue pushing VEGAS Pro into professional video editing software territory, or would they try to turn it into a more beginner-friendly application instead?

Whereas version 14 was somewhat of a maintenance release, it’s safe to say that VEGAS Pro 15 is the first proper “upgrade” since Magix took things over from Sony. And judging by this first glimpse into the future, brighter days are coming for VEGAS Pro. From a UI facelift to performance improvements and some brand new features, there’s plenty of stuff to be excited about if you’re a VEGAS Pro user. Let’s take a quick look at some of the most important changes in VEGAS Pro 15.

Apart from introducing better support for scaling in Windows 10, VEGAS Pro 14 didn’t look too different from older iterations of the software. It’s not that the application looked ugly, but the interface was surely showing signs of age. We’re finally getting a noticeable UI refresh in VEGAS Pro 15 which now looks more modern and visually up-to-date than its predecessors.

The visual upgrade was pulled off very well by the Magix team, almost seamlessly so, in the sense that experienced VEGAS Pro users will feel right at home while still noticing that things have improved from both the visual and workflow standpoints. In other words, don’t fear that updating your VEGAS Pro license to the latest version will result in having to deal with something like Microsoft’s “intuitive” new Ribbon interface from their dreaded Office 2007 update. On the contrary, VEGAS Pro 15 feels similar to the previous versions of the software, but its interface is noticeably streamlined and better looking.

The most apparent visual upgrade is the new set of UI color options. There are now four color schemes to choose from, namely Dark, Medium, Light, and White. These aren’t drastically different from each other, but will undoubtedly come in handy for users who prefer using lighter or darker interfaces when editing or doing more critical color correction work. The UI color is slightly darker by default, which is a welcome change in my opinion. The application will need to be restarted before any color theme changes come into effect, though, which is hopefully something that won’t need to be done in future versions of VEGAS Pro.

Apart from the background color shade, the users can also subtract or add colors to the icons on the bottom tray. It’s a minor change, yet one that will allow users to make VEGAS Pro’s interface look even more “their own.”

The UI has received yet another facelift in the form of drop-down “burger” menus which display icons that aren’t shown on-screen by default. For example, a drop-down next to the Pan/Crop and FX icons in the timeline will display controls for Freeze Frame At Cursor, Playback Rate, and other useful functions. These are hidden by default but can be pinned to the interface if required. Instead of forcing its existing users to get used to a new interface, VEGAS Pro allows for customizing the controls according to anyone’s needs and workflow habits, eventually resulting in a perfect working environment for every individual user. 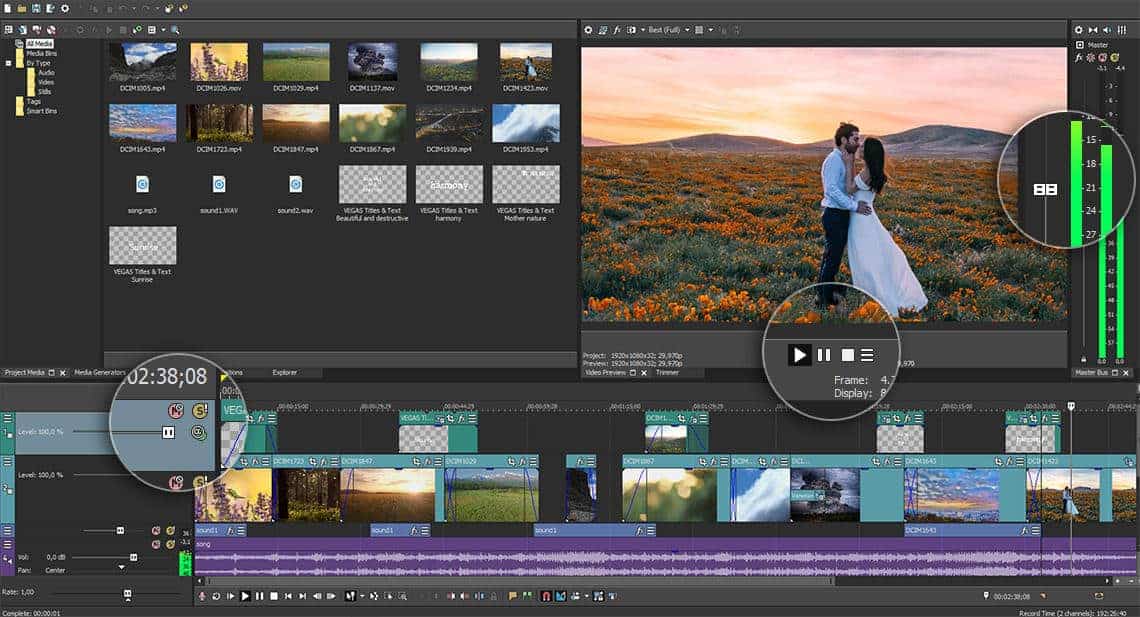 Last but not least, VEGAS Pro 15 makes it possible to customize the workspace layout with improved docking features. Custom layouts can now be saved and recalled more conveniently than before, making VEGAS Pro capable of transforming from, say, a video editing tool to a color correction utility in a split second. If you’re not a fan of the interface changes in the latest version of VEGAS Pro, you can still revert to the old VEGAS Pro 14 interface from the View category in the main menu.

Despite being a fan of VEGAS Pro’s workflow compared to that of its closest competitor Adobe Premiere, I always felt that the software was somewhat lacking in the performance department. The real-time playback and rendering speeds were less than ideal in most cases, at least from my personal experience. Magix looks to change this with performance optimizations introduced in VEGAS Pro 15. Most importantly, the new version promises more efficient use of Intel’s Skylake and Kaby Lake processor architectures resulting in improved decoding and encoding speeds. The main VEGAS Pro codec will now also utilize the Quick Sync Video technology featured in the latest 8th-gen Intel processors.

Some nVidia cards (the one based on Fermi architecture) will now also result in a performance boost in VEGAS Pro. Unless I’m mistaken, though, this particular type of GPUs from nVidia isn’t that widely used nowadays, so the majority of users won’t see any difference in this regard.

In practice, I’m noticing improved real-time playback performance on my Intel® Core™ i7-7500U-based ultrabook. Scrubbing the timeline and previewing cuts now feels much faster and more responsive than before. The same can be said about rendering speeds, which are noticeably faster compared to what I was able to achieve with the previous version of the software. Other performance improvements are noticeable as well. For example, creating titles with the NewBlueFX plugin no longer results in underwhelming real-time performance. I can also preview some standard effects and transitions without skipping frames in the preview panel.

Speaking of rendering, the render box in VEGAS Pro 15 has also received a facelift, with new options like multi-channel and loop rendering. Sharing your exported videos directly to websites like YouTube and Vimeo is now also possible, although I’ve never been too crazy about this type of functionality. Still, users who upload videos on a daily basis will probably put the video sharing options in VEGAS Pro 15 to good use.

VEGAS Pro 15 now features the native VEGAS LUT Filter plugin for loading LUTs (lookup tables) saved anywhere on your computer’s hard drive. This functionality was missing from previous versions of VEGAS Pro and could only be achieved by using third-party tools. The LUTs can now be applied to any media, event, video track, or the entire project. It is also possible to adjust the strength of the applied LUT.

Also included is a brand new Picture In Picture effect which makes it easier to create video or image overlays and perform other simple video compositing tasks. The effect can be applied to individual events or an entire video track. The overlay event/track needs to be placed on top of the track which will work as the background. Most importantly, the size and position of the overlayed media can be adjusted directly from the video preview panel itself, which is considerably more intuitive than using the crop panel like in the previous versions of VEGAS Pro. Animations can be added easily using the animation controls in the Video Event FX panel.

Unlike one of its biggest competitors, Adobe Premiere which can only be used on a subscription basis, Magix VEGAS Pro keeps the traditional single payment licensing model. There are multiple pricing options to choose from, though, ranging from the more affordable VEGAS Pro Edit to the most advanced VEGAS Pro Suite version.

In celebration of the VEGAS Pro 15 launch, Magix is offering reduced prices on all new purchases and upgrades until November 30th, 2017. For example, VEGAS Pro 15 Suite is priced at $599 instead of the regular $799 asking price. Upgrading to the current version will cost you around $299, although this price will depend on which version is currently active in your user account. Also, a forthcoming free update is scheduled for later in November, expected to introduce more flexible file swapping and event healing features. And last but not least, NewBlueFX ColorFast 2 is included in the upgrade for a limited time only ($99 value).

VEGAS Pro 15 is a major step in the right direction. The development team at Magix has shown that they understand the needs of VEGAS Pro’s users and the software is now, once again, a relevant contender in the NLE market.

The development team at Magix proves that they understand the needs of VEGAS Pro's users. VEGAS Pro is now, once again, a relevant contender in the NLE market.