Wave Alchemy has recently released Evolution, a feature-packed virtual drum machine for Native Instruments Kontakt and fully compatible with the free Kontakt Player. The  We are taking a closer look at Evolution and giving away three copies of the product to three lucky BPB readers!

Wave Alchemy has been one of the more prominent players on the soundware scene for quite some time now, sampling everything from classic drum machines and analog synthesizers to modern gear and acoustic instruments. In fact, the company has released so many drum sample libraries to date that there’s hardly anything left for these guys to sample. With that in mind, it only made sense for WA to shift their focus from sampling and sound design to building specialized virtual instruments, using their drum sampling expertise as the foundation.

In other words, both the included drum samples and Evolution’s sound engine are entirely new. It is not a simple remake of Revolution with modernized sample content, but a completely different take on the Kontakt-based drum machine concept. It is also important to point out that Evolution is compatible with the free Kontakt Player, meaning that the full version of Kontakt is not requried for use.

The bundled sample library adds up to a whopping 28,000+ of electronic drum sounds and layering tools in total. These aren’t samples from Wave Alchemy’s older releases, but brand new sounds built from scratch for use in Evolution. Unsurprisingly, the included drums are suitable for use across a range of electronic music genres and can be further manipulated to fit almost any type of project that requires synthetic drums.

According to the info available on Wave Alchemy’s website, crafting the sample content for Evolution was a five-year-long endeavor. The raw samples were sourced from an arsenal of electronic and acoustic instruments, and then processed, layered, and mangled into their final shape using outboard gear and software tools. As already mentioned, the team at WA are seasoned veterans of the drum sampling game, so it’s no surprise that the quality of the included sounds is on a high level. Quantity and quality don’t necessarily go together, but this is one of the most versatile and most inspiring drum sample libraries I’ve ever had the pleasure of browsing. It’s the kind of drum sample collection you’d expect to find on a hard drive of a producer who spent years creating a secret stash of his favorite custom-made sounds. 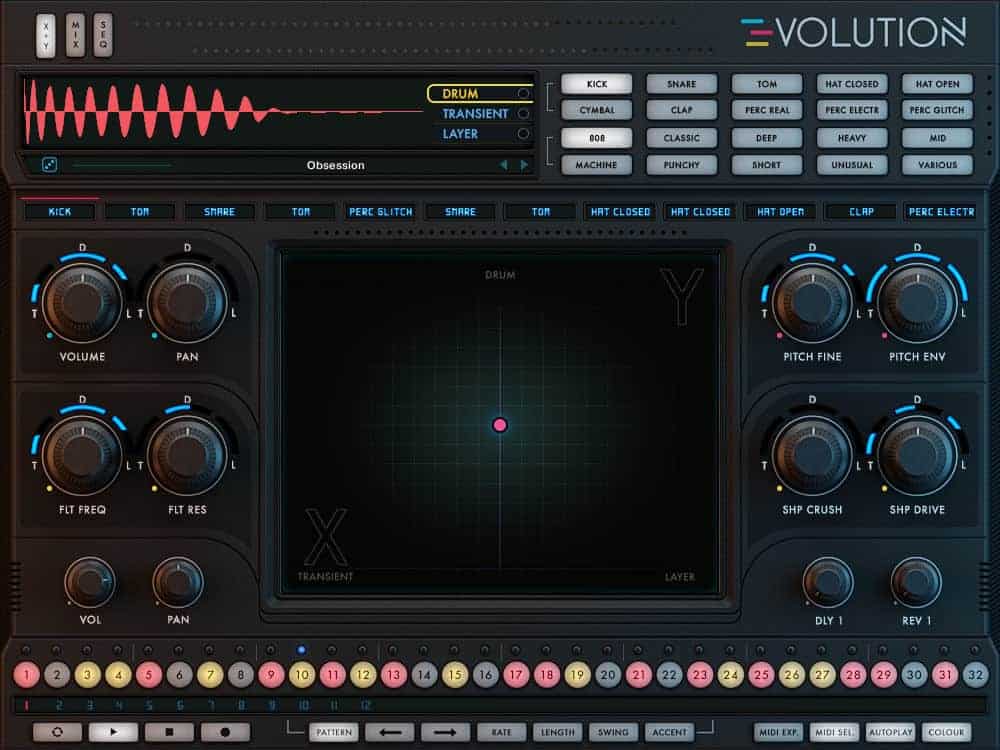 With such a vast amount of sample content on offer, good organization is an absolute must. No one likes browsing through thousands of samples with generic names and no folder structure. Thankfully, Wave Alchemy does a solid job here as well, sorting the available sounds into three main categories (Drum, Transient, Layer), all of which are further organized into groups and subgroups. So, for example, the samples from the Drum category are sorted into Kick, Snare, Tom, Hat Closed, Hat Open, Cymbal, Clap, Per Real, Perc Electr, and Perc Glitch groups. Going further, choosing the Kick group unveils the 808, Classic, Deep, Heavy, Mid, Machine, Punchy, Short, Unusual, and Various subgroups. Once you’ve selected the desired subgroup, you can use the drop-down menu to choose a specific sample, press the Random but to choose a random sound, or browse through the sounds quickly using the Select knob in the Drum section of the Mix view. It is a pretty good system for sorting samples, although not exactly perfect because you also have to remember the subgroup for a particular sound if you want to find it later on. But it gets the job done and makes going through thousands of available samples a relatively painless affair.

Evolution aims to provide all the firepower required to act as the primary drum instrument in a project. That is quite a task for a Kontakt-based instrument, but the team at Wave Alchemy already did a great job with Revolution and is now taking things one step further.

The workflow in Evolution revolves around its drum layering engine. The output of each drum channel (there are twelve channels in total) consists of three sound components which are mixed using the XY-pad in the main panel of the interface. The three components are labeled Drum, Transient, and Layer, as we mentioned earlier. The Drum slot holds the main drum sound, be it a kick, a snare, a hi-hat, or something else. The Transient component adds snap and impact to the main drum, whereas the Layer slot adds body and tone. Thanks to the XY-pad controller, the drum layering process in Evolution is intuitive and blazingly fast. The relative volumes of all three components can be adjusted with a single mouse click.

This first step is only the tip of the iceberg, though. Once you’re happy with this rough mix of the three drum components, you can dig deeper into Evolution’s sound design engine which features filtering, transient shaping, bitcrushing, distortion, envelope adjustments, and a variety of other sound shaping tools which are available on the Mix panel. The effects can be applied to each channel individually, as well as to the main output. The included compressor and 4-band equalizer can handle the most critical mixing tasks, which is useful if you’re using Evolution in a standalone instance of Kontakt. Also included are delay and reverb sends. The two reverb modules are particularly interesting as they capture the sounds of classic hardware reverb units which are known to work well with drum sources. 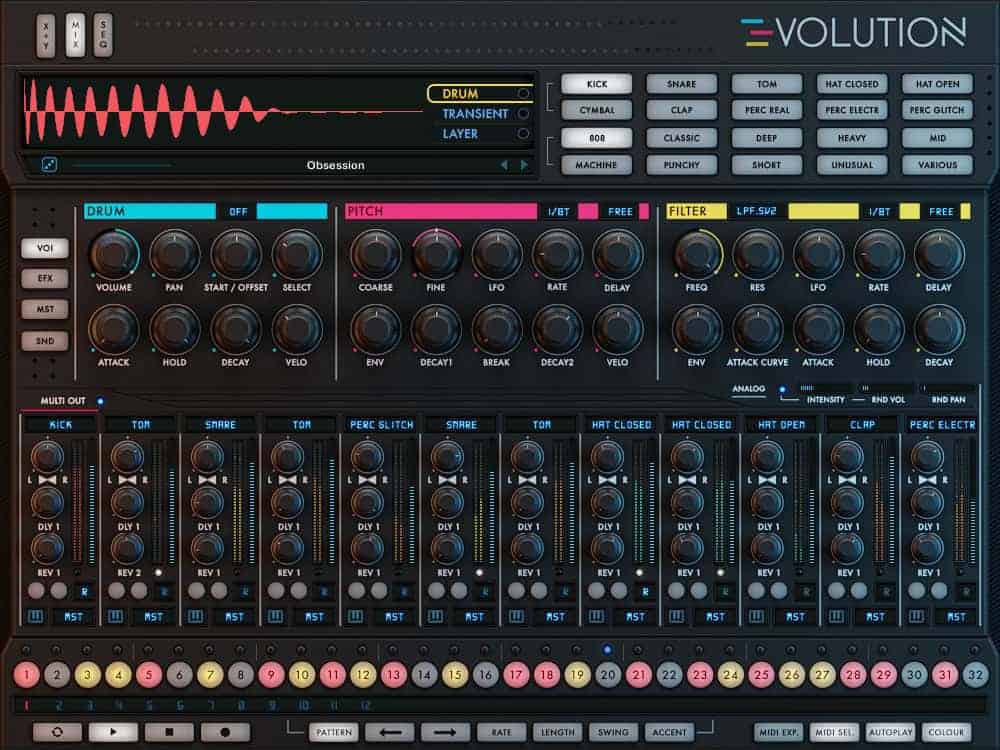 The Mix view hosts an array of tools for shaping the active drum channel.

It goes without saying, with Evolution’s sound design engine you can customize the 28,000+ included drum samples to your heart’s content and create unique drum hits that you can genuinely call “your own.” On the other hand, if tinkering with sound design is not your thing, you can always use the provided samples as-is or choose between hundreds of available kits and presets.

But that’s not why we’re here. With such an intuitive audio engine, I’m pretty sure that even the most novice of users will spend some time tweaking the available drum samples to their liking. One of the features that make processing easier are the two macro controls available in the XY panel which can be linked to a variety of parameters from the Mix panel. The macro knobs provide easy access to adjustments which work well on a particular sound.

Equally impressive is Evolution’s sequencer which is packed with handy workflow enhancements to help speed up the drum sequencing process. The sequencer lane for the selected drum channel is available on all three UI panels, but the dedicated Sequencer panel is where the magic happens. The main view fairly self-explanatory. It is the classic step sequencer mode which shows all twelve drum channel lanes stacked vertically. Clicking and dragging a step will adjust note velocity. It is also possible to zoom in on a single lane in order to make more precise velocity adjustments. Individual channel lanes can be muted, soloed, cleared, and randomized.

Far more interesting, though, is the FX sequencer mode which allows the user to sequence a variety of parameters for the selected voice. These include volume, pan, pitch, and any parameter assigned to the channel’s macro knobs. The FX sequencer is probably my favorite part of Evolution’s engine. Transforming a simple drum loop into an exciting, evolving drum sequence can be done in a matter of seconds, and I’m saying this quite literally. Simply clicking and dragging your mouse across several parameters can make a massive difference. The randomize feature is available here as well, perfect for coming up with crazy modulations and loop variations with a single click. 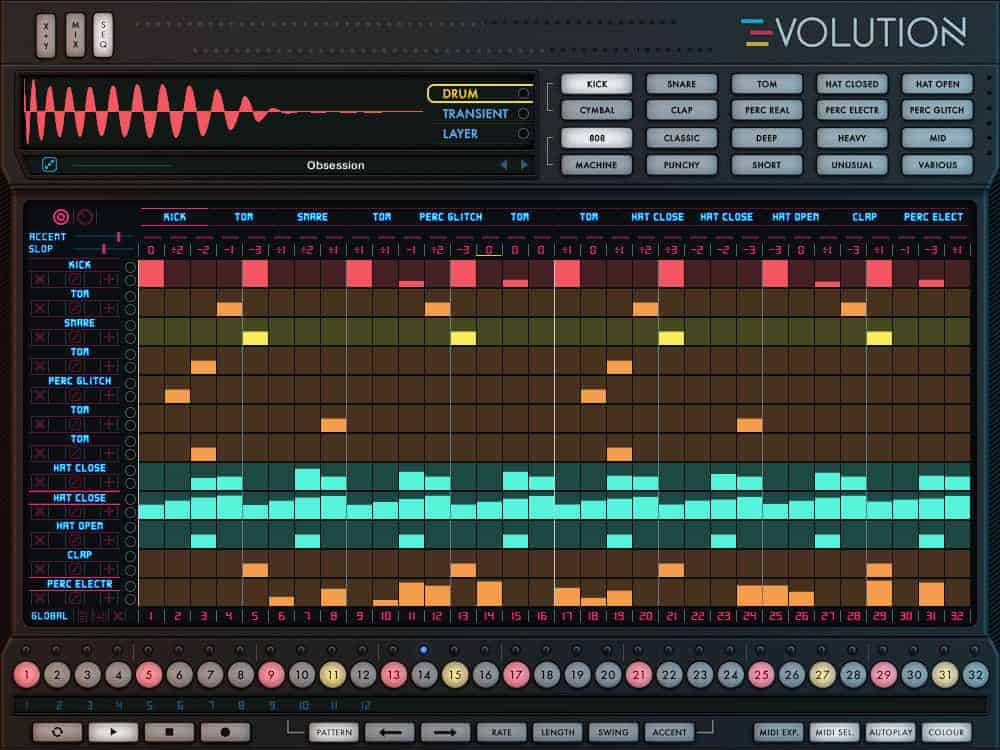 The step sequencer panel in Evolution.

The sequencer also features a humanize mode (labeled Slop) which can be applied per step or to the entire sequence while changing the time offset values on every loop. The usual shuffle features are included as well, with the “invert” option which gives the sequence a swung feel.

Obviously, mentioning all of the features available in Evolution would make this article unnecessarily long so I’ll stop here. Feel free to leave comments below if you have any questions and check out Wave Alchemy’s official Youtube channel as they’ve posted a terrific series of clips which thoroughly explain all there is to know about Evolution.

No Evolution Is Perfect

As for the drawbacks, I would like to see some additional labels on the GUI in a future version of the interface, for example on the mute/solo buttons in the Sequencer panel. The user interface looks lovely indeed, but some of the controls are not entirely clear until you’ve read the manual. Speaking of which, reading the manual or watching the tutorials is an absolute must if you want to get the most out of Evolution. The instrument has quite a few brilliant features which aren’t immediately apparent. So prepare to spend some time learning its ins and outs.

One last thing, which I’m pretty sure you’re wondering about, is whether Evolution can load external samples or not. Well, it can’t. Considering the impressive amount and quality of the included sounds I wouldn’t call this a drawback, but it’s certainly going to be a deal breaker for some users.

Evolution is an impressive virtual drum machine. It is certainly the most substantial Kontakt-based drum machine I’ve ever used. The bundled sounds are well worth the asking price in my opinion, and the fantastic sound design and sequencing workflows make it a valuable addition to any electronic music producer’s arsenal. The instrument’s inability to load external samples is a major drawback for users who prefer using their own sounds, though. If you’re interested in trying Evolution before buying it, Wave Alchemy is offering a rather generous demo version which can be downloaded completely free of charge from their website. The free demo version contains 800 sounds from the full product and comes with the same features.

Wave Alchemy is kindly giving away three free copies of Evolution to five lucky BPB readers! To enter the giveaway, submit your name and email address in the form below. You will be subscribed to BPB’s mailing list, with the option to unsubscribe at any time. You can further increase your chances of winning by completing the bonus entries (such as subscribing to our YouTube channel, following us on Twitter, etc.).

The winners will be announced on this page on Friday, March 9th. We will also notify the winners via email, so please double-check your email address for typos when entering the giveaway. Good luck everyone and thanks for reading BPB!

Evolution is an impressive virtual drum machine. The bundled sounds, the workflow, and the sequencing capabilities are among the best we've seen in a Kontakt-based instrument so far. The only real drawback is not being able to load external samples.