This article is about free flanger VST plugins. For more categories, return to the Free VST Plugins page.

Flanging came about in the early days of analog recording. By manipulating the reels of two tape machines, engineers could create a modulation effect that was a revolutionary breakthrough in audio recording and music production. Flanging is useful in many ways. It can add a sense of doubling (called “Artificial Double Tracking” in the early days), or add movement to a sound as a pure modulation effect. A flanger VST plugin is useful for many types of audio sources, making it a versatile recording and mixing tool.

As an effect, flanging has gone from only being achievable via multiple tape machines, to being available in guitar pedals and studio rack units. Nowadays, flanger plugins in a digital audio workstation have capabilities that no hardware flanger could ever dream of. This is a list of the best free flanger plugins on the market today, and some of them have impressively next-generation capabilities.

Blue Cat Audio offers an excellent freeware plugin library. Some of their products are not only rivaling, but also surpassing the quality of paid software. While the company is mostly known for its gain control plugins, Blue Cat’s modulation tools are equally compelling. Their flanger plugin is “vintage” in nature, but modern sounds are easy to achieve thanks to the plugin’s versatile and intuitive interface. The user can adjust the delay, depth, rate, feedback, and spread of the effect. You can also control the wet/dry mix, as well as feedback and feed-forward. There is a two-way switch that selects the flanging shape.

Blue Cat’s Flanger is available in mono or stereo versions. This free flanger VST plugin works great on any audio source, as well as every phase (pun intended!) of the production process. It comes in multiple formats, including VST, VST3, AU, AAX, and RTAS, so no matter what DAW you use, it can integrate with it. It’s a well-rounded flanger that can run the spectrum of classic rock sounds to more modern music production. 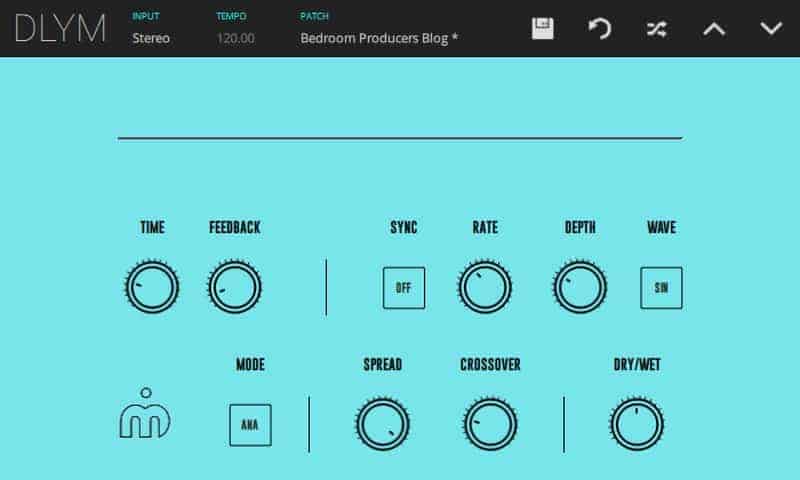 A digital chorus/flanger that is inspired by some classic analog designs, the DLYM offers two processing modes. The first one is an “analog emulation,” whereas the other recreates the timeless BOSS Dimension sound. As an audio modulation tool, DLYM’s versatility is insane. It seems to be marketed toward use on more synth-oriented genres, but this flanger effect has multiple applications in a rock or pop context. It has some very Eventide-like presets on tap. When used on guitars, DLYM can get the lush, ethereal sounds that made the BOSS Dimension chorus line so infamous.

The plugin’s user interface offers direct control over timing and feedback. The rate and depth section can sync to your digital audio workstation’s tempo. How far the effect spreads across the stereo field is also adjustable, as is the crossover control -which limits the range of the frequency. You can choose between six different modulation waveforms that allow you to further fine-tune the sound, including sine, square, triangle, saw, and the slightly more esoteric sample and hold and filtered sample and hold. DLYM Delay Modulator comes available in VST, AU, and iOS formats, Windows 32/64-bit, Mac 64-bit. 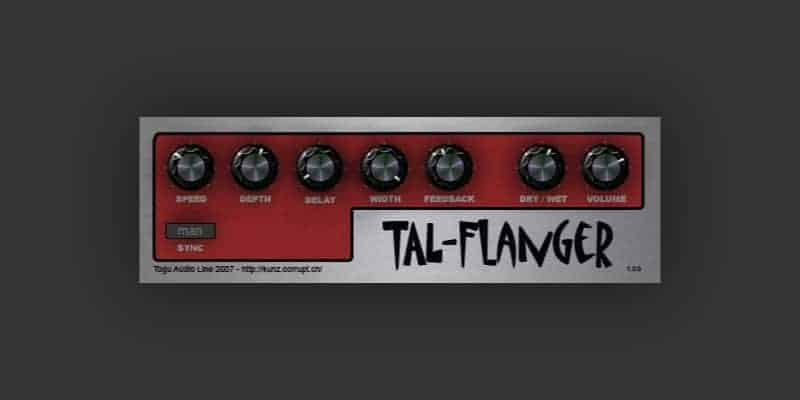 Togu Audio Line has made quite a name for themselves in the freeware plugin market by making great sounding software that is easy to use and navigate. Their take on the flanger VST plugin is a stereo-only effect that is based upon an asymmetrical feedback analog design. It offers a control set that is pretty much standard to flangers with adjustable speed, depth, delay, width, and feedback parameters.

TAL-Flanger is simple, but it sounds solid and supports VST and AU formats. You should also check out Togu Audio Line’s freeware TAL-Chorus plugin, which is a software recreation of the Roland JUNO synthesizer’s legendary built-in chorus. And let’s not forget about the TAL-NoiseMaker virtual instrument, which is featured in our list of the best free synthesizer VST plugins. 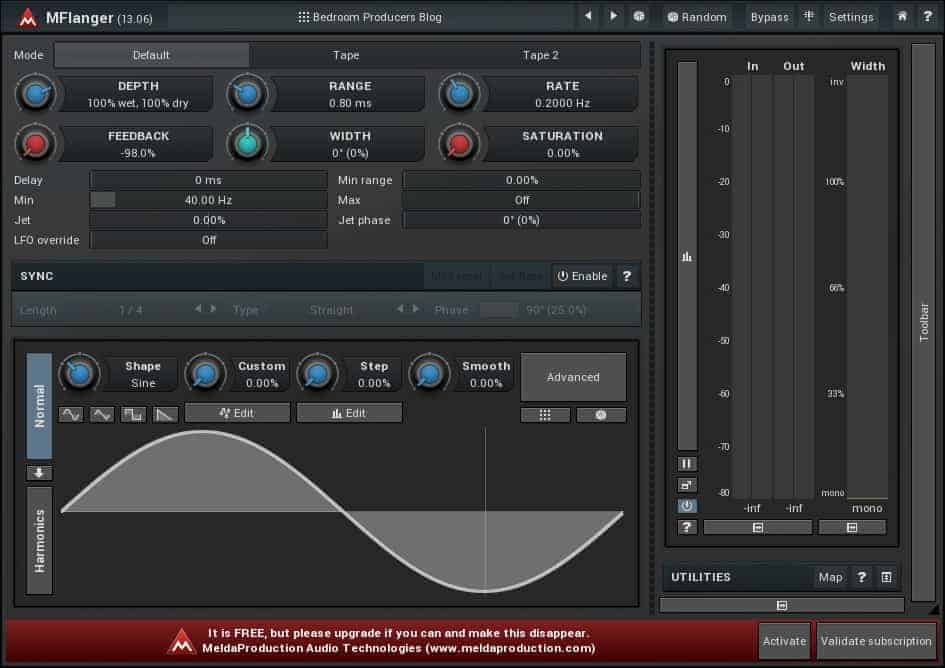 MeldaProduction offers a host of freeware plugins, and their flanger doesn’t hold back in pushing boundaries. It utilizes variable oscillator technology, giving you control over the shapes and waveforms, and even has a harmonic mode so you can tweak the signal by the harmonic content and not by the waveform shape. MFlanger allows you to adjust the depth, width, feedback, and the range of the flanging effect. There are also controls for parameters like delay time, the minimum range of the delay, low and high-pass filters, and the tremolo generator section.

The user can override the LFO synchronization and freely adjust the modulation speed. The Signal Graph in the bottom left of the GUI provides direct control over the frequency oscillators, which can be useful depending on the source content (audio or MIDI). One of MFlanger’s coolest features is the ability to take the digital edge off of a sound by adding in tube saturation, a caveat not usually found in modulation plugins.

At the output section, MFlanger can work in several ways, including mono, stereo, and mid/side for use on busses or the master. It supports Windows or Mac 32/64-bit systems in VST, VST3, AU, and AAX plugin formats. MFlanger might be the most fully-featured free flanger VST plugin available. It can get the ubiquitous modulation that any flange/chorus can, but what MFlanger can do runs so much deeper than that. With a very robust feature set that is far too advanced to get into here (the manual is 64 pages!), you can make it work however you’d like. 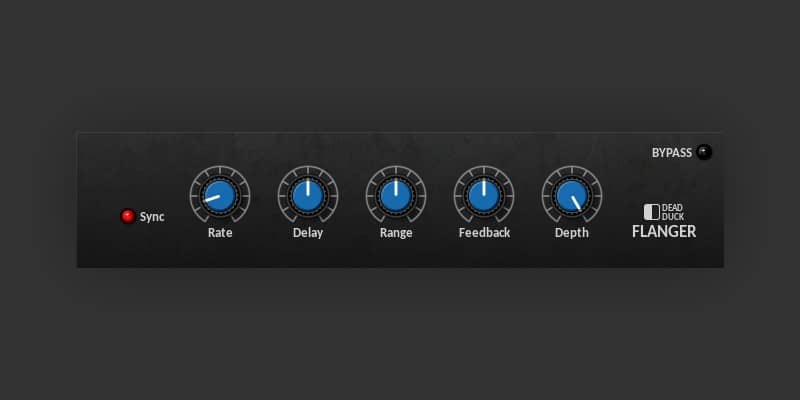 In the glory days of analog hardware, standalone modulation effects used to come in rack-sized and half-rack-sized units. Dead Duck Software has nailed that period-correct vibe with their flanger offering, visually and sonically. While it’s one of the more minimalistic options on this list, don’t let the lack of extra features fool you. If you’re looking for a no-frills flanger VST that can nail classic sounds, Dead Duck Flanger is the perfect fit.

Many of the plugins on this list offer next-gen features that make them infinitely tweakable, but Dead Duck Flanger gives the classic flange/chorus sound of hardware analog flangers, which might not suit all styles of music. You can even sync it to your session tempo, something that would be impossible with hardware. The GUI has the aesthetics of a classic piece of rack gear, which is a nice touch if you’re into realistic-looking plugins.

It’s no surprise that the most powerful flanger VST plugin on this list is also the most complicated to use. HY-Plugins created a multi-effect has a massive amount of options for sculpting your sound. MBMFX2 effectively splits your sound into three bands and lets you manipulate each one differently by inserting the built-in effects. There are 22 effects on offer in total, one of which is a reasonably capable flanger module.

The free version of HY-MBMFX2 allows for one effect per frequency band, as well as a single LF and envelope follower. The full version of the software has an extended feature set, but might be a little overwhelming to use at first, so the free version is a great introduction. Navigating the freely scalable GUI is pretty intuitive, with its drag-and-drop functionality allowing for experimentation with different effect combinations on the fly.

With the amount of control that MBMFX2 provides, it is a proper modulation workhorse on individual tracks. This one-of-a-kind freeware plugin and its multi-band approach to modulation give you access to complex multi-effects that would otherwise be impossible to recreate. Whether MBMFX2 gets used as a multi-band flanger effect or something more elaborate is entirely up to you.

If you’re looking to spend some many on a more advanced flanger VST, here are a few recommended products:

For more freeware plugins and instruments, return to our Free VST Plugins page.