This article is about free reverb VST plugins. For more software, return to the free VST plugins page.

Free reverb VSTs used to be significantly less capable than their commercial counterparts. They were notorious for sounding artificial and metallic or, simply put, much less pleasing than the paid plugins and hardware units. Luckily, things have drastically changed for the better in recent years with the release of plugins like Orilriver, Dragonfly Reverb, MuVerb, Cloud Seed, and others.

We now have a range of excellent free reverb effects, from go-to mix reverbs, which can handle most mixing situations, to more specialized plugins intended for sound design purposes. In this article, we’re listing the best freeware reverb VST plugins for PC and Mac. We have also provided mini-reviews to help you choose the right one for your digital audio workstation.

You’re more than welcome to leave a comment on this page. Share your thoughts about the featured plugins, and feel free to let us know if there’s a reverb VST plugin that should be added to the list.

OrilRiver is the best freeware reverb VST plugin you can download right now. It is a versatile, feature-packed, and great-sounding stereo reverb effect that is on par with some of the best commercial reverbs on the market. Capable of delivering beautiful hall reverbs and simulating the reverberation of smaller rooms, it is our go-to reverb effect in most mixing scenarios.

Apart from its excellent sound quality, OrilRiver also delivers in the user experience and workflow departments. The interface is well-organized, with an intuitive control scheme that makes it easy to tweak the simulated space’s dimensions and tone to your liking. The plugin offers a choice between twelve early reflection models and five types of reverb tail, with additional room size, diffusion, damping, and modulation controls. Also included is a 3-band equalizer for further shaping the color of the reverbed signal. The two GUI skins allow the user to choose between lighter and darker color schemes.

Dragonfly Reverb was released late in 2018 and quickly became one of the most recommended freeware reverb plugins. It is based on the Freeverb 3 Hibiki algorithm, which sounds simply amazing. The user interface is equally good, with easily accessible controls and direct access to all the algorithm’s parameters.

The plugin covers a range of room types, from small recording rooms and studio-like spaces to small and large halls. The sound of the room can be adjusted using multiple tone controls, as well as by tweaking its size, width, diffusion, and other properties. Dragonfly is equally effective as a mixing tool for simulating realistic rooms and a sound design utility for creating huge and artificial sounding spaces.

Loosely mimicking the sound of classic reverb units by Lexicon and Eventide, OldSkoolVerb is a decent freeware alternative to plugins like UltraReverb ($199), PSP 2445 EMT ($149), TSAR-1R ($99), BREVERB 2 ($169), and others. An extended version of the plugin called OldSkoolVerb Plus (49.95) is also available, adding a powerful spatialization module to the feature set of the freeware edition.

TAL-Reverb 4 was recently updated with a new user interface and a new algorithm that sounds even smoother than before. This plugin is perfect for producers who want a great-sounding reverb with a simple user interface. The front panel only features six knobs and a single button, making TAL-Reverb 4 one of the most streamlined reverbs on this list.

The algorithm is adjusted to sound good on a wide range of sound sources, which makes sense since the plugin is based on the reverb effect used in Togu Audio Line’s excellent TAL-Sampler virtual instrument. The sound is very diffused and particularly suitable for long reverb sounds. It’s worth noting that TAL-Reverb 4 can only be used on stereo sources.

Cloud Seed is the way to go if you need a huge 80s-style reverb effect. You can think of it as a freeware alternative to commercial plugins like Valhalla Shimmer ($50) or even Eventide Blackhole ($199).

More of a special effect than a mixing utility, Cloud Seed can transform any sound into a wonderfully lush, evolving pad. Not a plugin you’d use to recreate natural spaces like rooms and small halls, but perfect for simulating huge halls and surreal spaces. It is the kind of tool every sound designer needs in their arsenal.

Cloud Seed was developed with C# and C++ and only works in Windows-based VST host applications. It doesn’t emulate any particular hardware reverb unit but perfectly captures the character and tone of vintage reverb effects of the 80s. 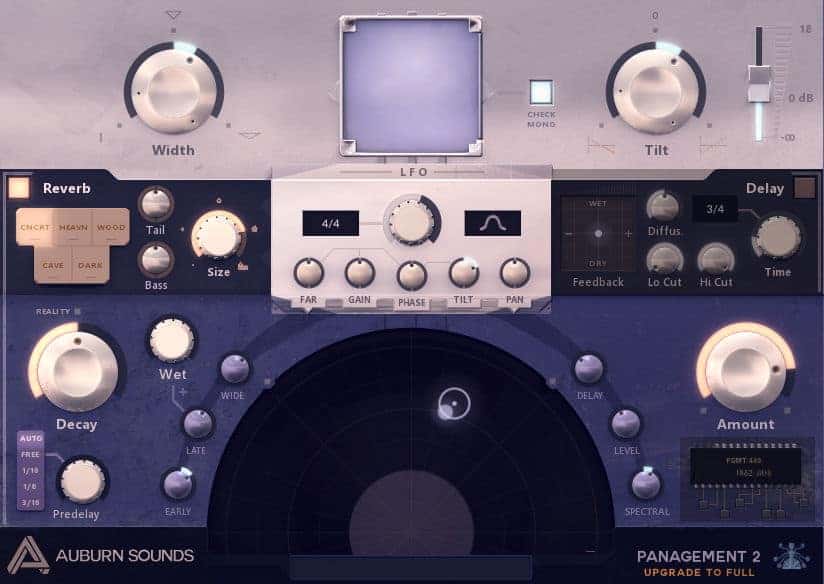 Panagement 2.0 is a multi-effect plugin designed as an all-in-one solution for audio spatialization. It combines binaural positioning, reverb, and delay effects in a single unit.

Compared to the first version of the plugin, Panagement 2.0 introduces late and early reflections, a binaural delay module, offers enhanced modulation and features an improved workflow. 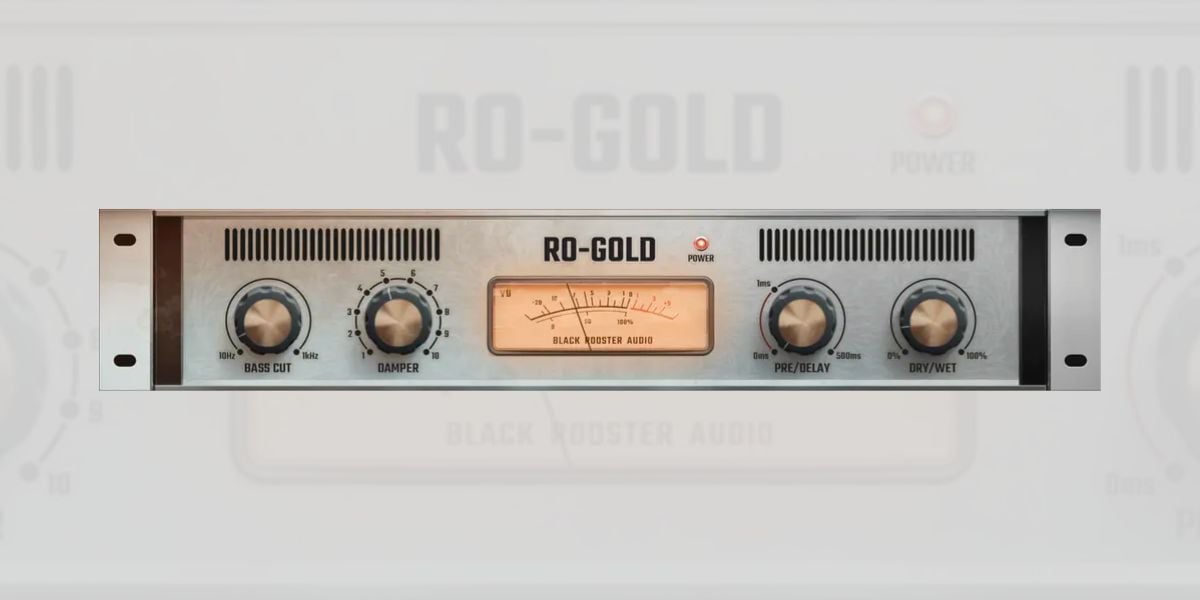 RO-GOLD is a pristine emulation of the EMT 140 plate reverb fitted with a gold plate.

Most plate reverbs sound good on vocals, but RO-GOLD takes things to the next level. It delivers a warm and lush vintage sound that will quickly add depth and shine to your vocal recordings.

The plugin features a simple, easy-to-understand user interface. Use the Bass Cut and Damper controls to polish the tone and adjust the Pre/Delay and Dry/Wet knobs to fit the reverb into your mix.

Sanford Reverb is another excellent choice for a free reverb VST plugin that covers all the basics. It features 3-stage early reflections adjustments for the left and right stereo channels with each stage’s volume, pan, and time controls. The reverb tail section features a freeze button and pre-delay, time, and damp adjustments. The reverb signal can be filtered and modulated before it reaches the output.

The plugin’s interface is nicely designed and well-organized, with similar controls grouped into sections to avoid confusion. The CPU hit is reasonably low, making Sanford Reverb another strong contender for a go-to freeware reverb plugin. The only real drawback is that Sanford Reverb works in Windows-based digital audio workstations only.

If you find most reverbs too complicated to use, prepare to be amazed. Reverb plugins don’t get any more streamlined than Reverb SOLO.

Whereas a full-featured plugin with multiple control parameters is required in most situations, sometimes you just need a quick reverb effect to add to a channel and dial in the proper settings as quickly as possible. Reverb SOLO was designed to do just that with its simple one-knob interface and plug-and-play workflow.

Developed by Acon Digital, the company behind the popular Verberate reverb effect and the excellent free chorus VST plugin called Multiply, Reverb SOLO is a serious mixing tool despite its simple looks. The central knob is a macro control that simultaneously alters the size and the tone of the reverb effect, transforming from a small room to a large hall in a single movement. The dry/wet slider on the bottom is used to control the volume of the reverb effect. 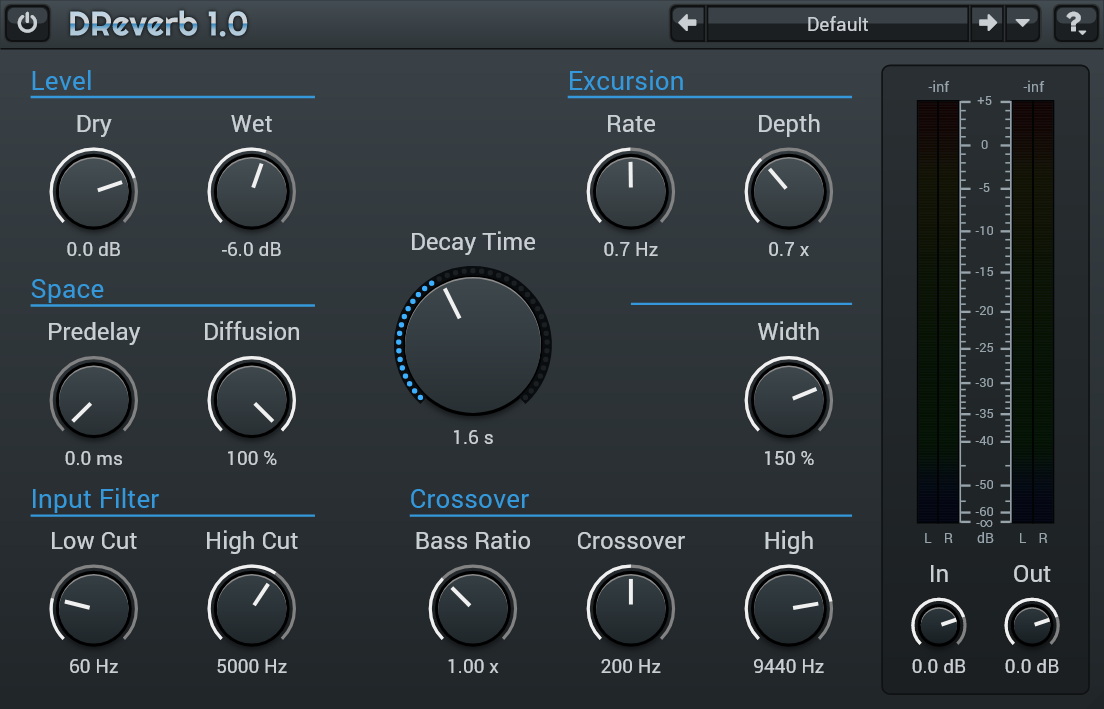 DReverb by is an algorithmic reverb plugin that offers unusually long decay times, a highly flexible reverb engine, and CPU-efficient performance. Advanced users will likely take advantage of DReverb’s in-depth control layout, which lets you fine-tune almost every aspect of the reverb algorithm.

The interface is vector-based, with a clean look and a subtle color scheme. You can freely resize the GUI to perfectly fit your screen.

Sound designers and mixing engineers looking for a flexible reverb unit will appreciate DReverb’s unconventional feature set. The long decay time is one of the plugin’s headline features, while the clean GUI and low CPU hit make it a must-have reverb VST plugin. 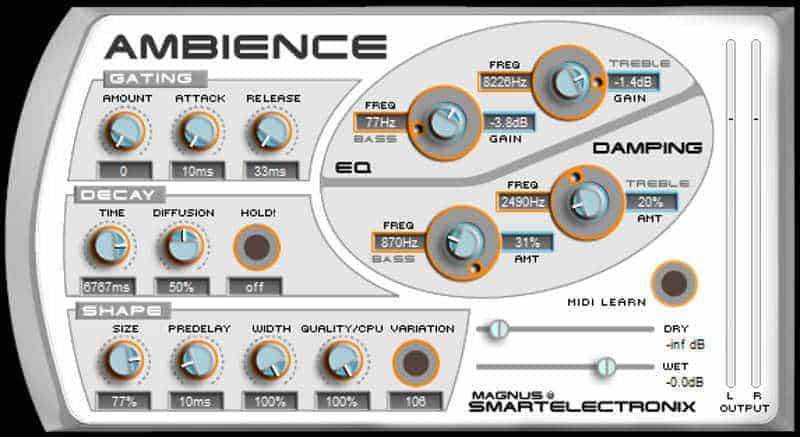 Next up in the epic reverb category is Ambience by Magnus. A classic reverb VST plugin that’s been around for ages, Ambience still manages to impress with its full sound and clean reverb tales that stand strong even by modern standards. Ambience shines as a specialized reverb unit for emulating massive spaces and surreal cosmic atmospheres. It also features a gate module for achieving the signature 80s gated snare sound.

Once considered a CPU hog, Ambience runs very smoothly on modern computers. The user interface could do with a refresh, especially in the size department, although it’s still large enough for use on screens that aren’t 4K. The plugin was re-released as open-source in the meanwhile and compiled for use on 64-bit Mac systems. Unfortunately, the Windows version will only work in 32-bit VST plugin host applications.

MuVerb is another great reverb plugin for emulating large spaces. It is the native reverb effect in MuTools MuLab but is also available as a VST plugin for Windows and macOS. MuVerb sounds fantastic and will do wonders on synth sounds, drones, or any other mix element that needs to sound huge. The sound quality comes at the price of higher CPU consumption, though.

The user interface is fairly simple, and MuVerb doesn’t have much to offer in terms of versatility. It shines at emulating large halls, and the Turbulence controls further expand its sonic palette to irregular spaces like caverns and holes. MuVerb is another plugin on this list that is more of a sound designer’s secret weapon than a conventional mixing tool. 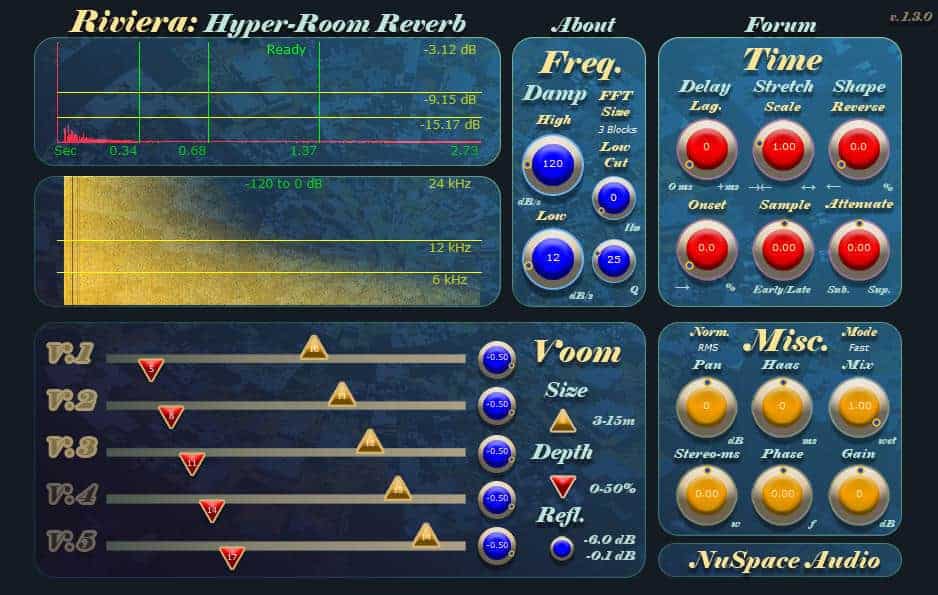 Riviera is a rather unique reverb plugin in that it is a combination of an algorithmic and a convolution reverb. It uses some smart DSP coding to reduce the CPU consumption while delivering very realistic emulation of room, plate, string, and other reverb sounds.

Mverb is one of the more popular freeware reverb plugins due to its perfect mixture of simplicity and sound quality. The streamlined user interface and the small number of control parameters make Mverb very easy to use, whereas the underlying algorithm makes it one of the nicer sounding reverb effects. Unlike most reverb plugins on the market, Mverb is based on Dattorro’s figure-of-eight reverb structure, which results in a more natural and pleasant sound than the regular comb filtering approach to reverb simulation.

Mverb is also surprisingly versatile for such a basic-looking plugin. It won’t deliver the greatest of hall reverbs and the most realistic small room ambiances on the market, but it covers all the basics required for everyday mixing projects.

Mverb is a strong candidate for a go-to reverb effect if you find OrilRiver and OldSkoolVerb too advanced or cumbersome to use. Everything can be achieved in a few mouse clicks in Mverb, with a decent range of room and larger hall reverbs. The plugin is open-source and ported for Windows, Mac, and Linux machines.

The extended list below features some of the additional free reverb VST plugins worth checking out but weren’t included in the main list. These bonus plugins are listed in no particular order.

Return to our Free VST Plugins page for more freeware plugins and instruments.