Surge is a versatile hybrid virtual synthesizer in the VST3 plugin format for digital audio workstations on Windows, macOS, and Linux. It was initially priced at €99 before being discontinued in the early 2010s. Years later, the developer Vember Audio (aka Kurasu) re-released it as open-source on GitHub.

Being that Surge is an incredibly powerful synthesizer, the re-release attracted a lot of attention, and a team of developers gathered under the name of Surge Synth Team to continue the development. First, they updated the code to be compatible with modern-day DAWs, following that up with more and more new features and GUI refinements.

The latest update is the most epic one so far, making Surge a one-of-a-kind free synthesizer.

Let’s start with the visuals. Surge is now skinnable (in-depth documentation on the skinning engine is coming soon) with swappable GUI assets. The plugin now includes a brand new dark skin (pictured on the screenshot below), which is a godsend for those late-night synth programming sessions. 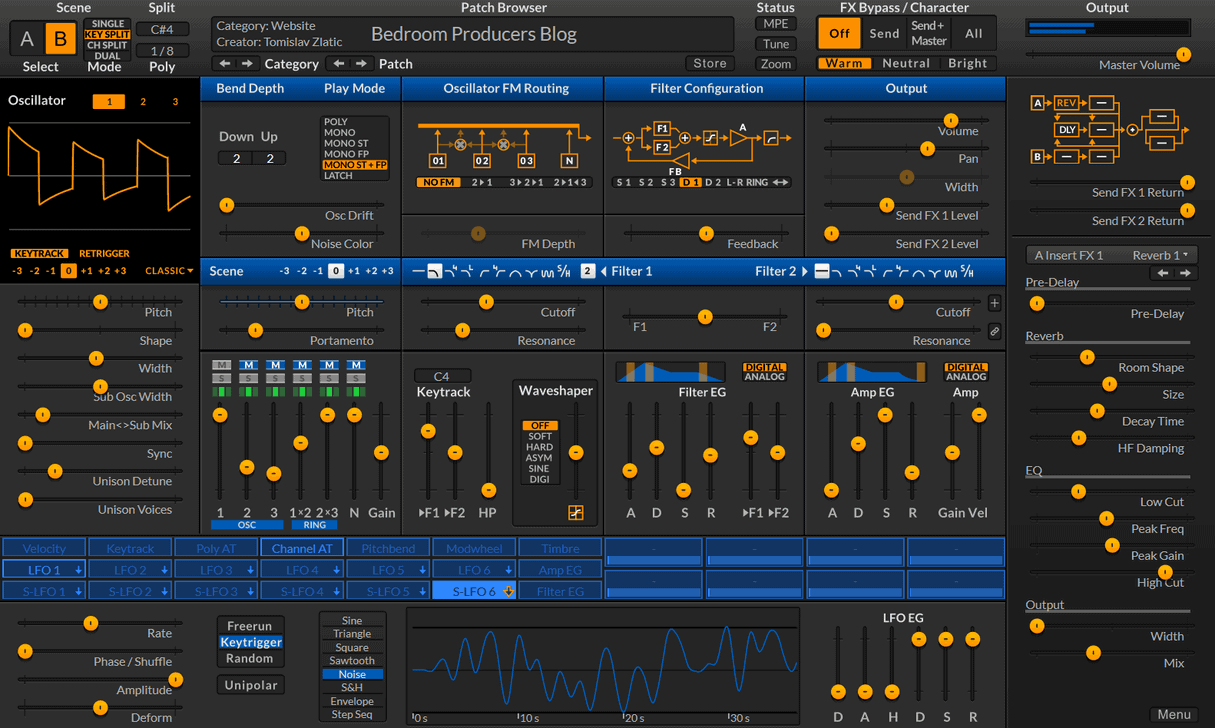 The old light skin is still the default one, so you’ll need to activate the dark skin from the main menu. Also, being that the plugin is now skinnable, we can look forward to some great-looking third-party skins in the future. Bring it on, GUI designers!

Next up, Surge v1.7.0 brings tons of improvements on the FX front. The plugin now features s a new reverb mode, a flanger effect with extreme tuning and feedback options, and a ring modulatorAlso, the old phaser, reverb, rotary speaker, and EQ effects were improved.

The sine oscillator was improved as well, with more quadrant waveforms, a unison mode, a pair of filters, extended feedback range, and negative feedback that results in a square-shaped waveform. As the developers described it in the changelog, the sine oscillator is now a mini-synth on its own.

There are dozens of other improvements and added features in the latest version of Surge, so I won’t list them all here. Check the official changelog on the Surge project page for detailed information about each update.

One FREE Synth To Rule Them All

For a very, very long time, Synth1 by Ichiro Toda was commonly regarded as the best freeware synth plugin. Back then, ask for a free synth recommendation on any music production forum, and you’d always get the same response – Synth1.

As time went by, free VST plugins kept getting better, and so did the freeware synths. There came a period when it was hard to say which freeware synthesizer was the best. Amazing freeware plugins like Tyrell N6, TAL-Elek7ro, Helm, Atlantis, and several others, were sharing that number one spot in the realm of free synth plugins. It was simply impossible to say which one was the best because each of those synths was great in its own right, and none of them really stood out.

Now, once again, it’s perfectly clear which freeware synthesizer is the best. Nothing comes close to Surge, and there’s simply no discussion. What’s crazy is that Surge keeps getting better with each update, and the developers at Surge Synth Team seem unstoppable. These people are doing a massive favor to the music producer community in general, and we can only thank them for the fantastic job they’ve done so far.

You can download the latest version of Surge via Github. The software is available in VST3 plugin format for 32-bit and 64-bit DAW applications on Windows. As for macOS and Linux, only 64-bit plugin hosts are supported.

If you’re interested in helping with Surge development, check out the details about this open-source project on the product page. The developers are also looking for help with logo design, presets, and testing.