We selected six applications that will let you record audio for free using your laptop or desktop computer. Whether you want to quickly capture a musical idea, save an audio journal entry, or record a podcast, there’s no need to spend money on expensive software.

Check out the list of free audio recording apps below and learn more about them in our mini-reviews. We mentioned each app’s pros and cons so that you can decide which one is the best fit for your audio recording workflow.

This is the best free recording software:

The entries are ordered by complexity, from simple to advanced. Scroll below to learn more about each audio recording app. 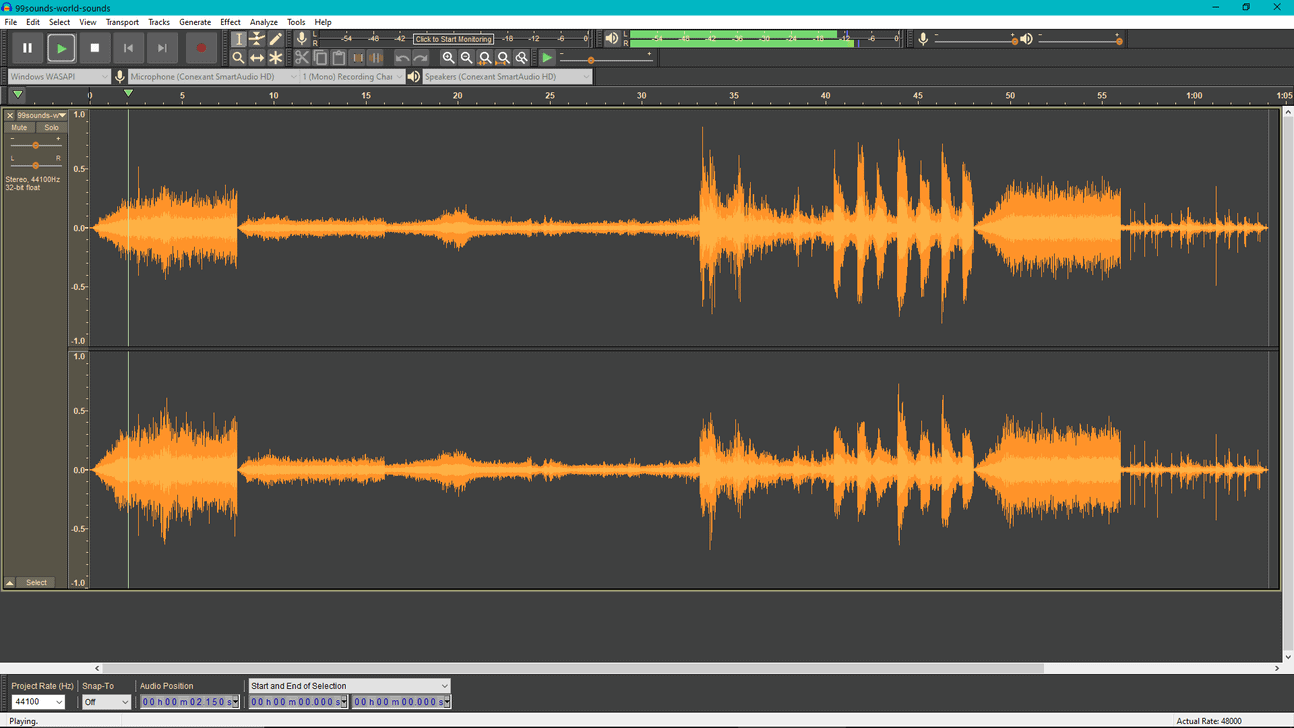 Audacity is probably the most widely recommended audio recording application, at least when it comes to freeware. Despite its unassuming looks, Audacity offers plenty of audio recording and editing features, as well as some advanced functionality that you won’t find in other recording software.

In Audacity, the audio recording workflow is as easy it gets. Launch the software, select the input device, start recording. That’s all there is to it. Connect any audio source to the audio input on your PC, and Audacity will do the rest.

Once the audio is captured, you can edit the recording, cut the waveform, or apply effects like EQ and compression. Audacity supports VST plugins, too, so you can use any number of third-party effects.

Basic multitracking functionality is available, but don’t expect too much from Audacity in this regard. You can record, say, a guitar part, then record your vocals on a separate track. For anything more advanced than that, we recommend using a proper digital audio workstation.

Capturing internal audio is another one of Audacity’s strong points. Sometimes you “simply” want to capture the audio that’s coming out of your speakers, but this is surprisingly hard to do with most other recording apps.

In Audacity, recording internal audio is an easy task. Choose the “Windows WASAPI” audio drive, and select the desired output device (this could be your speakers or your headphones). Hit the record button, et voilà! Everything you hear on your PC is being recorded.

The only unfortunate thing about Audacity is that its interface can be confusing for beginners. If you’ve never used audio recording software in the past, Audacity can look a bit daunting. Again, the recording workflow is pretty straightforward, but the UI design is somewhat lacking. That said, there are plenty of tutorials online that will help you get started. 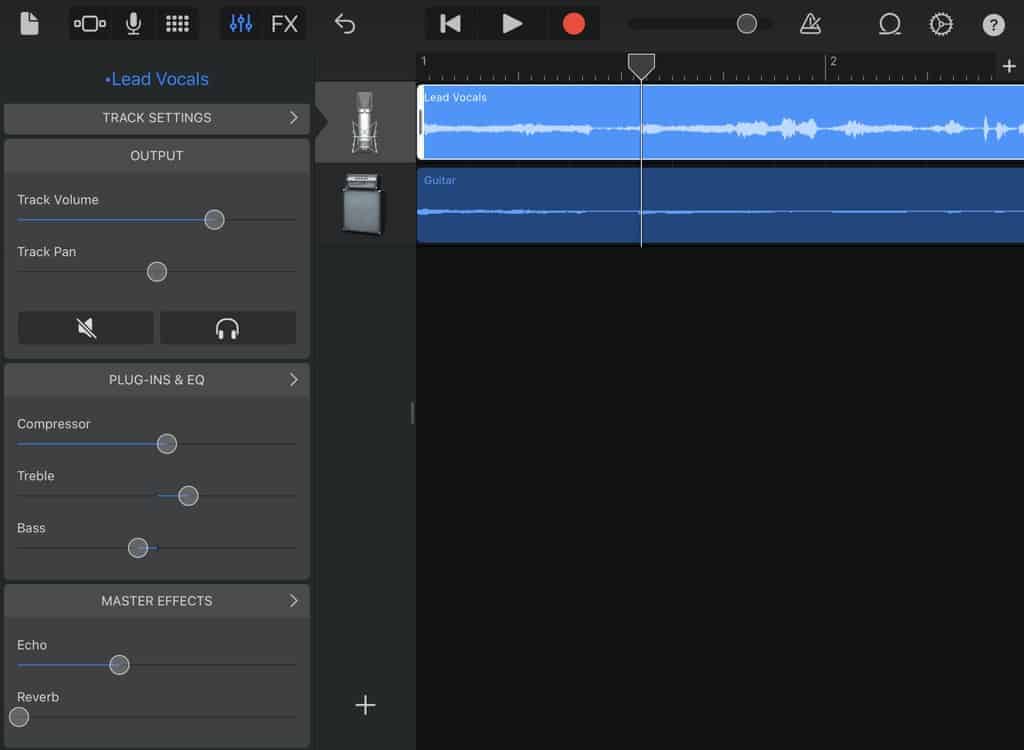 GarageBand is the free audio recording and mixing program that comes pre-installed on every Mac computer. Free software that comes with your computer is generally regarded as “not that great,” but this is not the case with GarageBand.

Apple’s free recording software can capture audio and handle basic mixing tasks. For absolute beginners, GarageBand is a lot more intuitive than something like Audacity. The interface design is user-friendly, and chances are you’ll feel right at home after launching the program for the first time.

Most importantly, the recording workflow is intuitive and straightforward. There’s no menu diving or messing around with advanced settings here. Hook up any audio source to your Macbook and start recording.

To be fair, Garageband can actually do a lot more than record audio.

Apple’s free recording software comes with many effects, virtual instruments, and audio loops to help new users get started. If you’re interested in making music on a computer, Garageband is a great place to begin your adventure.

Once you figure out the basics of recording and mixing, move to something more advanced like Logic Pro X, Cubase, Studio One, or Pro Tools.

If you need a simple budget-friendly audio recording program for your MacBook, look no further than Apple’s own GarageBand. It’s gratis, well-designed, and easy to use. However, if GarageBand is too simple to handle your audio recording needs, the next two entries in the list will be a much better fit. 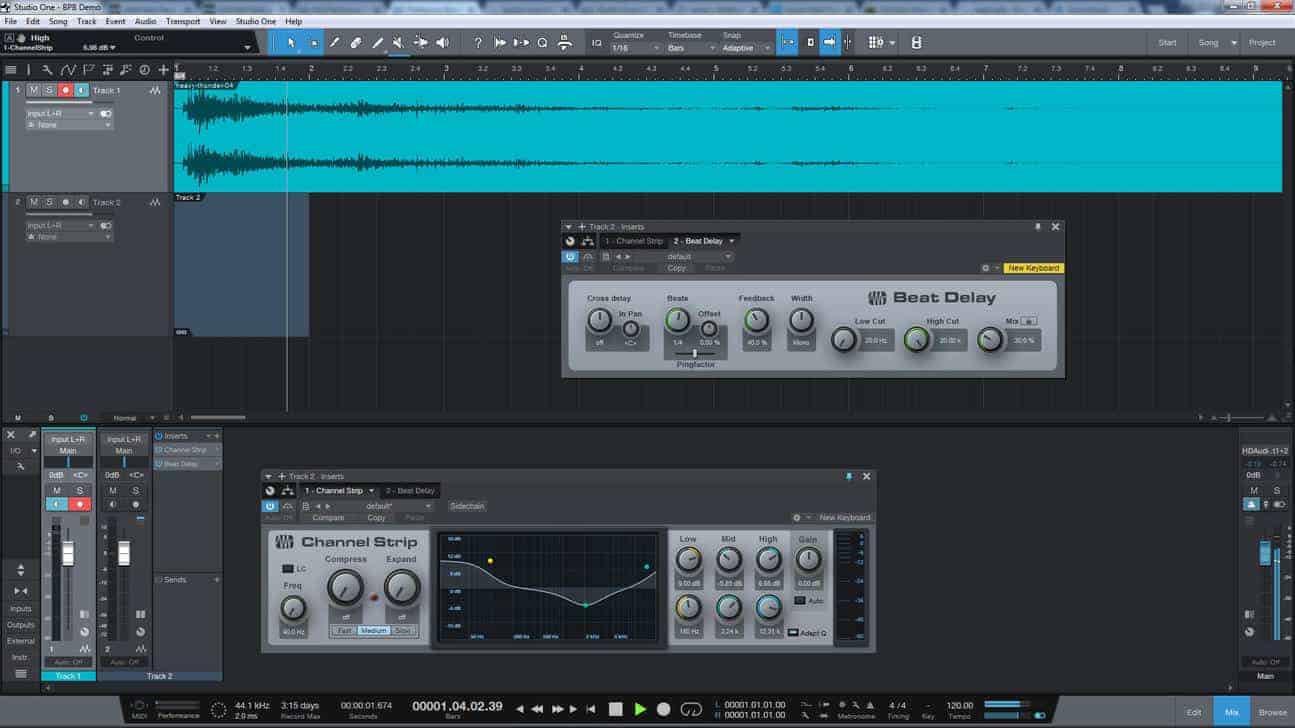 Studio One Prime is the free version of the Studio One 5 digital audio workstation developed by PreSonus. It is the best free recording software for working with multiple audio tracks.

With Studio One Prime, you can capture one audio recording at a time or even record multiple audio sources simultaneously. The latter technique is known as multitrack recording or multitracking. Of course, you will need an audio interface with multiple audio inputs for this to work.

But why would you want to record multiple audio tracks?

Let’s say you’re recording an interview for a podcast. In such a scenario, it’s always better to use two microphones, one for each person. That way, you can adjust the volume, EQ, and compression for each microphone in the mixing stage, resulting in a more balanced-sounding podcast.

Another typical example would be a singer/songwriter who is recording their voice and a guitar track. If the two are recorded separately, it is much easier to make the final result sound more polished with a bit of post-processing.

Studio One Prime includes a limited collection of tools from the full Native Effects suite developed by PreSonus. You can enhance the recorded audio with a compressor, EQ, chorus, distortion, reverb, and more.

Even a guitar amp simulator called Ampire is included, although it is just a basic edition of the plugin with only a few virtual amplifiers and cabinets. Still, this is an excellent addition for users who need a piece of recording software to capture and mix electric guitars.

Unfortunately, it isn’t possible to use third-party VST plugins in Studio One Prime. This is one of the limitations of the Prime edition compared to the full version of the software. For more flexibility, you would need to purchase Studio One Artist or Studio One Professional. 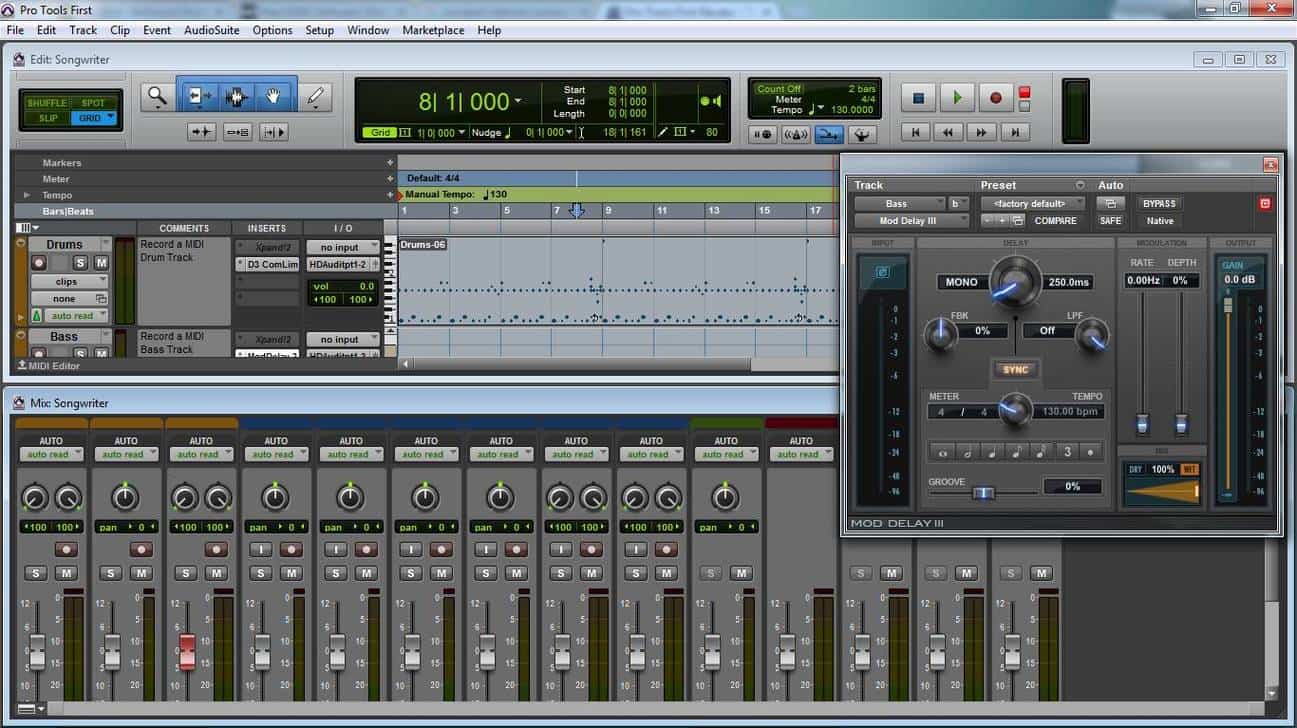 Pro Tools First is another free program for recording audio. It is the free edition of Pro Tools, the industry-standard software for multitrack recording, mixing, and mastering.

Much like Studio One Prime, the free version of Pro Tools comes with some limitations. You can only record up to sixteen audio tracks and use up to four audio inputs simultaneously. The free edition includes 23 audio effects, compared to the 115 in the flagship version of Pro Tools.

Still, Pro Tools First is more than capable of handling a variety of audio recording tasks. It shines as a free recording software for podcasts, multimedia projects, interviews, music demos, and more.

The maximum supported audio quality is a tiny bit lower than what you’re getting with Studio One Prime. Pro Tools can handle up to 32-bit/96 kHz audio. Of course, this will also depend on the recording capabilities of your audio hardware.

To summarize, if you want a taste of recording software used by the pros, Pro Tools First is an excellent place to try. Check out the free version and decide if the upgrade is worth your hard-earned cash. 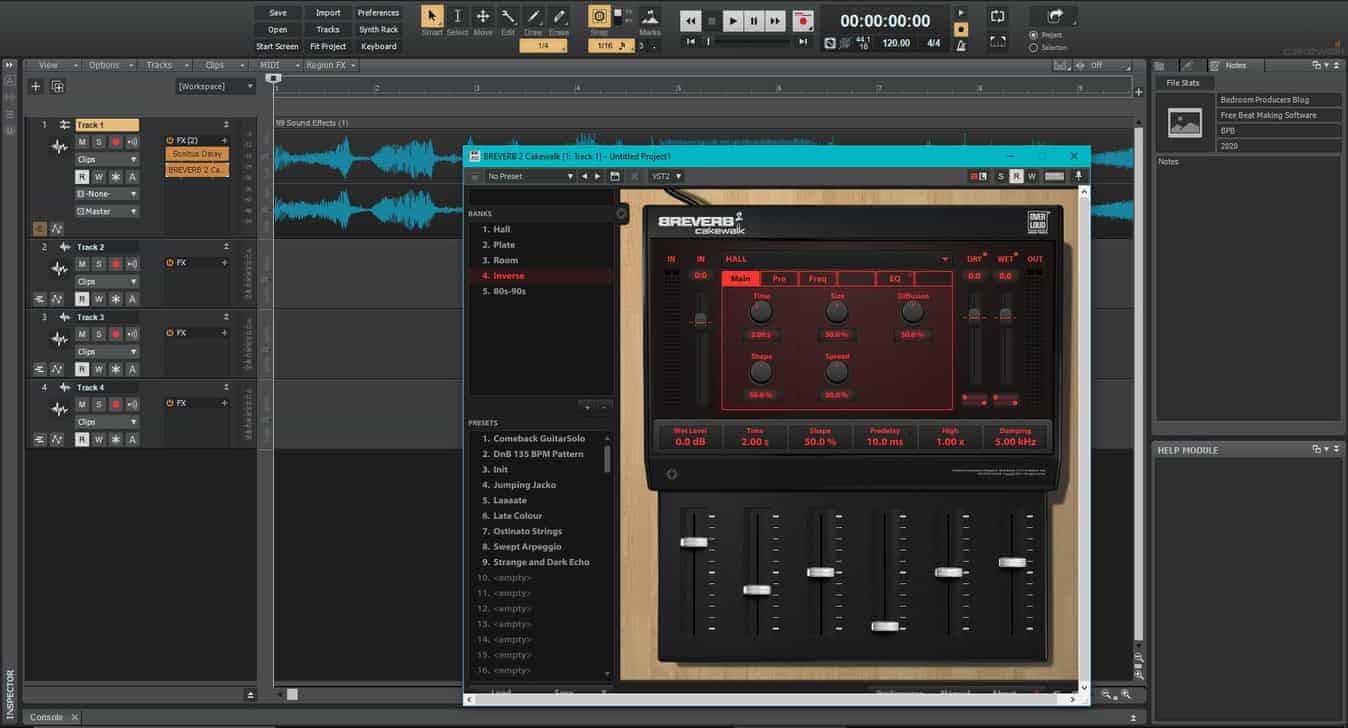 Cakewalk by BandLab is the most advanced recording software on this list. It does everything you would expect from a modern digital audio workstation. You can use Cakewalk by Bandcamp to record, edit, mix, and even master your audio.

Due to its complexity, Cakewalk by BandLab is not an audio recording program we would recommend to an absolute beginner. On the other hand, if you want to develop your audio recording and production skills, it might be a good idea to start learning with a more capable piece of software.

Cakewalk by BandLab is based on the old Sonar Platinum DAW, which used to be a very popular audio production workstation. BandLab acquired the Cakewalk and Sonar brands from Gibson and re-released the program as a free recording software back in 2018.

The result is Cakewalk by BandLab, a free audio recording program and music production tool that continues its famous predecessor’s legacy.

The software comes with a wide selection of effects, including some premium-quality compressors and reverbs. Cakewalk can also load VST plugins, so you can expand the included FX collection with third-party audio effects from other developers.

The ability to load VST plugins is one of the main features that set Cakewalk by BandLab apart from other free DAWs like Studio One Prime and Pro Tools First. Another similar app to try is Waveform Free by Tracktion. 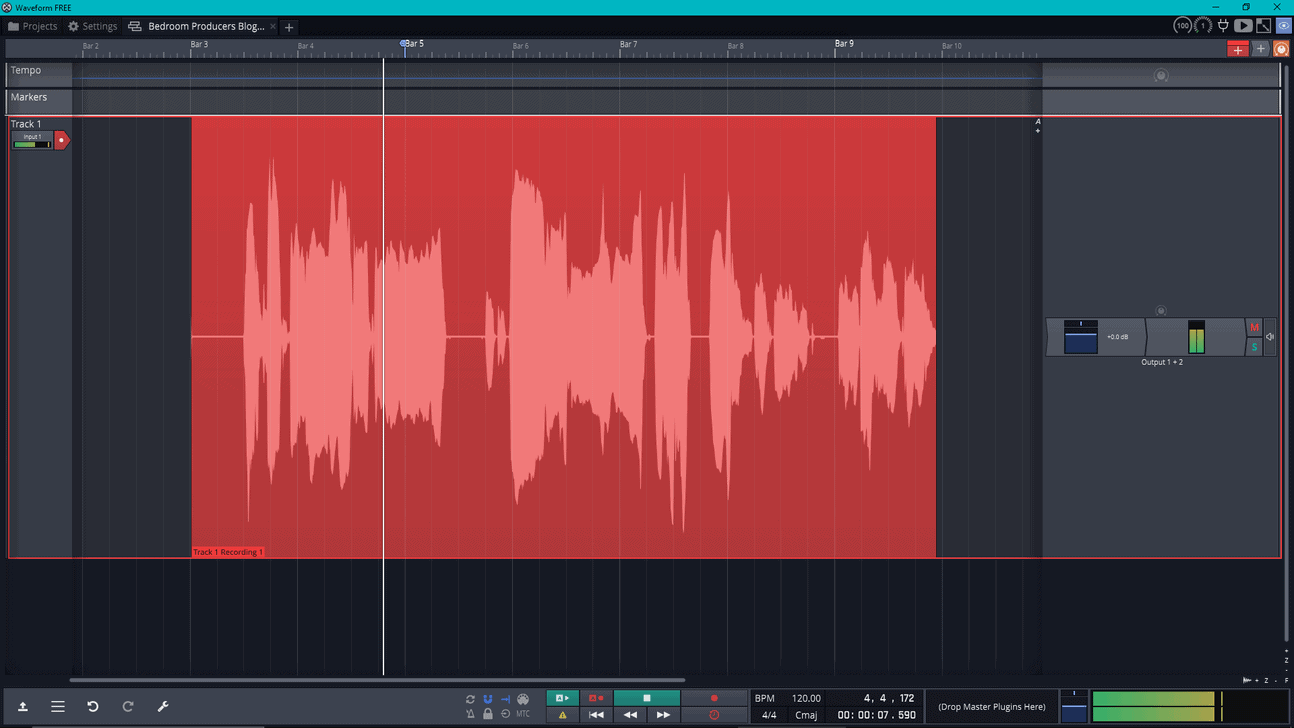 Waveform Free is another advanced music production workstation. It is a competent free recording software, but you can do so much more with Waveform Free.

The program will let you record an unlimited number of tracks. The recorded files can be edited, rearranged, and processed using digital effects.

Similar to Cakewalk by BandLab, Waveform Free can also load VST plugins. This means that you’ll have access to a virtually unlimited collection of third-party audio effects and instruments.

Before you go, here are some additional recording apps that you could try.

Wavosaur is very similar to Audacity, but it might be a bit more intuitive option for beginners. On the other hand, it only works on Windows and lacks some of the advanced features available in Audacity.

Ocenaudio is primarily a freeware audio editor. It also works great as audio recording software for Windows, macOS, and Linux.

Ardour is free audio recording software for Linux. It’s feature-packed and probably the best recording program out there for Linux users.

REAPER is really a digital audio workstation, but you can also use it for audio recording. The software is not free, but the developer offers a very generous 60-day trial period with unlimited functionality and no strings attached.

For simple recording tasks like a quick voiceover or a guitar riff, we recommend using Audacity or GarageBand. For recording multiple audio tracks, Studio One Prime or Pro Tools First would be a better choice. If you want the full power of a modern audio workstation when recording, use Cakewalk by BandLab or Waveform Free.

Would you like to suggest some other free recording software? Feel free to leave a comment and let us know.

For more freeware plugins and instruments, return to our Free VST Plugins page.