The team at UJAM are purveyors of instantly usable instruments and virtual effects. In their latest effort to bring creative sound design to the masses, UJAM has launched Finisher FLUXX.

You might know last year’s Finisher Micro, which is UJAM’s free offering, and a very useful tool in its own right.

Finisher FLUXX is the third in UJAM’s growing FINISHER line of plugins, after Finisher VOODOO and Finisher NEO. Each of them came with very simple knobs that controlled carefully predefined but very musical and inspiring macros.

You never know what you’re going to get with a Finisher plugin. They offer everything from flanging, delay, or reverb, all the way to granular pitch shifting and multiband distortion.

Usually, a single Finisher patch consists of multiple effects at once.

Finisher VOODOO was tailor-made for processing guitars, covering the entire gamut from nylon acoustic to gnarly electric, but also worked wonders on pretty much anything else, as multi-FX processors are wont to do.

Finisher NEO was a bit broader in its use, seemingly focusing more on providing an excellent sound for every context, but sounded particularly lush on synth parts and drums.

It’s an overused marketing phrase, but there really was something to be found for everyone. While a limited library of presets with limited customizability might sound like a turnoff, the sounds were all so expertly crafted that they really were incredibly usable and surprisingly flexible, depending on the context.

So, what haven’t they done yet in a Finisher plugin? Enter FLUXX, the rowdy bad boy of the group.

UJAM is touting this as being weird, nasty, and unpredictable. Think of it as “the evil genius of creative FX.” That’s because, according to UJAM, Finisher FLUXX “brings dead sounds back to life.” 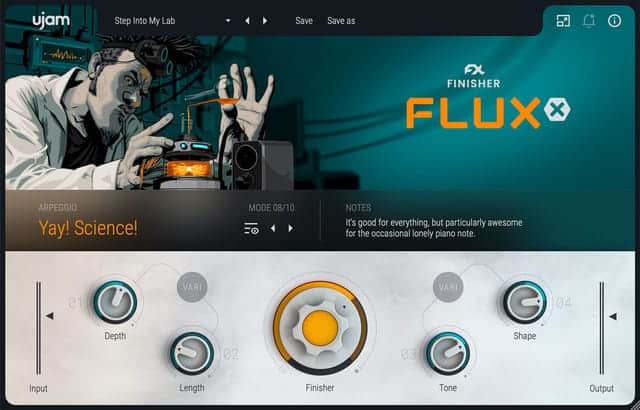 Finisher FLUXX is an easy-to-use multi-effect with an intuitive interface.

Finisher FLUXX comes with 50 modes, four controllable parameters (including size, heat, ambiance, and more), and a huge knob right in the center that functions as a macro with a capital “M”.

The UJAM Finisher instruments were always a great way to imbue your tracks with an instant wow factor, and Finisher FLUXX looks to be no different.

The software is available in VST, VST3, and AU plugin formats for digital audio workstations on Windows and Mac. Only 64-bit plugin hosts are supported.

Our friends at UJAM kindly provided two free Finisher FLUXX licenses for two lucky BPB readers. We are giving away one of the licenses here and one on our Instagram page. In other words, there are two ways for you to enter the giveaway:

Only one comment per entrant is allowed. However, you can enter the giveaway both here on Bedroom Producers Blog and on our Instagram profile to double your chances of winning.

GIVEAWAY – win a FREE copy of the Finisher FLUXX plugin by @ujaminstruments ($99 value)! How to enter: 1) Follow BPB on Instagram. 2) Comment on this post and tag (@) a friend. ONLY ONE COMMENT PER PERSON PLEASE! We will announce the winner on FRIDAY, OCTOBER 30TH on our website (and via DM). For more info visit bedroomproducersblog.com Good luck! :) #vst #daw #vstplugins #producer #musicproduction #musicproducer #bedroomproducersblog #audioengineer #ujam #audio

Congratulations to our winners! Everyone else, we have A LOT more free content soon, so stay tuned!

Thanks for reading BPB! ♥