We covered the best free synthesizer plugins in a recent article. But what are the best free retro synthesizers? Find out in the list below and return to free VST plugins for more software.

The retro 80s sound is more popular than ever. Genres like synthwave and chillwave are the perfect soundtrack for working from home while daydreaming about night rides on open highways.

But you don’t have to be a retro synth geek to love the sound of vintage synthesizers. One can hear the emulated sounds of retro polysynths in the chart-topping hits from mainstream artists like Dua Lipa and The Weeknd.

If you’re into making synthwave music, chances are you’ll need a good virtual analog synthesizer for your digital audio workstation. Help yourself to our Top 10 list of free retro synth VST plugins.

These are the best free vintage synthesizer emulation VST plugins:

Read more about each instrument below and scroll to the bottom of the page to see the Honorable Mentions. 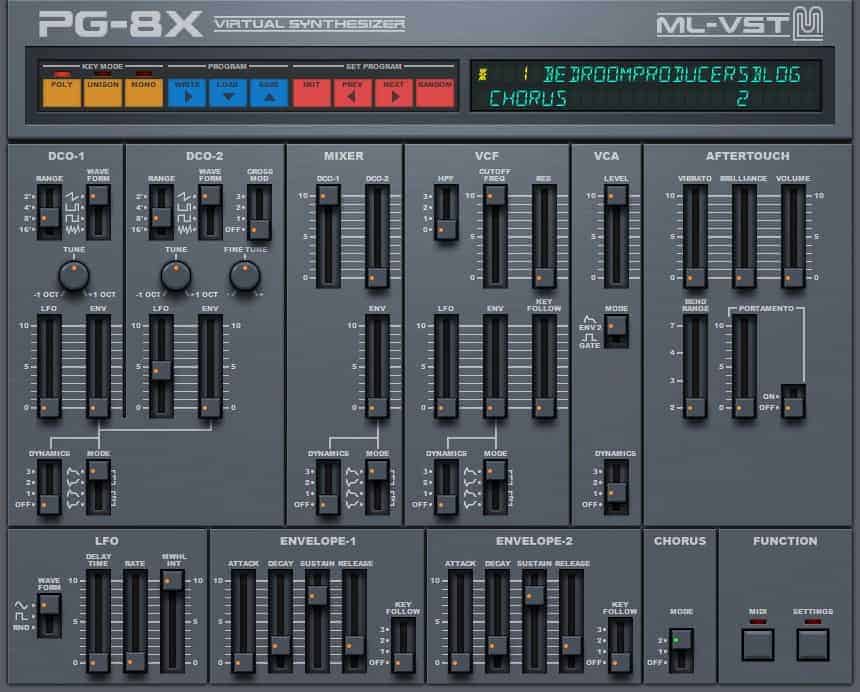 PG-8X emulates Roland’s legendary JX-8P analog synthesizer. The original JX-8P sounded huge, but it lacked in the hands-on control department. Users had to dive through menus to program new sounds.

That’s why Roland released the PG-800 controller. It was an external hardware device that made programming the Roland JX-8P and Super JX synthesizers a far more user-friendly affair.

The free PG-8X synthesizer by Martin Lüders gives the best of both worlds. You’re getting a detailed emulation of JX-8P’s analog synthesis engine and the control layout borrowed from the PG-800 controller.

PG-8X truly shines as a synthwave instrument. It’s one of those rare virtual instruments that sound analog-like almost effortlessly.

Create eye-watering lush pads and earth-shattering analog basslines in the blink of an eye. Turn on the Unison mode for instant fat leads. Also, the included chorus module applies an immediate retro-boost to any sound.

OB-Xd takes inspiration from the Oberheim OB-X analog synthesizer. The original was the analog weapon of choice for brass sounds, pads, and punchy bass.

Thankfully, this freeware plugin from discoDSP nails that classic Oberheim sound. It also comes with an extensive collection of presets that serve as an instant source of legendary analog sounds.

Even better, OB-Xd is easy to program thanks to its user-friendly interface. Beginners and sound design experts alike shouldn’t have any issues with building custom synth patches from scratch.

2Dat originally developed the OB-Xd. He later provided the source code to discoDSP, who are now handling the development and support.

You can use OB-Xd for free. The developers are accepting an optional $49 donation from users who want to support their work.

Full Bucket Music’s website is a treasure trove of emulated analog synthesizers. Even better, all of their vintage-inspired virtual instruments are free. We had a hard time selecting just two Full Bucket Music plugins for this article.

That said, be sure to check out everything else this talented developer has to offer. And be sure to support their work with a donation if possible.

Our first Full Bucket Music pick is the Mono/Fury plugin, which models the Mono/Poly analog synthesizer by Korg. Mono/Fury emulates all the original instrument’s quirks and peculiarities, including the unique polyphony mode. Each voice triggers a different oscillator, resulting in some complex multi-layered timbres when playing chords and melodies.

At the same time, Mono/Fury comes will all the handy features of a modern-day audio plugin. It has a preset manager, supports MIDI learn and automation, and features a state-of-the-art zero-delay feedback low-pass filter with self-oscillation.

Mono/Fury operates as a VST and Audio Unit plugin in all compatible digital audio workstations on PC and Mac.

Ah, another Full Bucket Music plugin and another Fury. This one is a personal favorite of mine as it models the Korg Poly-800, a cheap analog hybrid synthesizer that I owned back in the day. It featured digitally controlled oscillators and a terrible (in a charming way) analog filter.

The original Poly-800 is the exact opposite of what you’d expect from an analog synthesizer. It sounds lo-fi, thin, and plasticky. But sometimes, that is precisely the type of sound you need for an 80s-inspired music track.

The killer feature here is Poly-800’s chorus module. It’s super noisy, and the pitch goes all over the place. If Korg manufactured the Poly-800 in 2020, I think they would label the effect as “VHS mode” instead of a chorus.

Anyway, the Fury-800 takes all of these charming Poly-800 features and packs them in a convenient virtual instrument for PC and Mac. By all means, the Fury-800 plugin is a must-have if you’re into synthwave production. 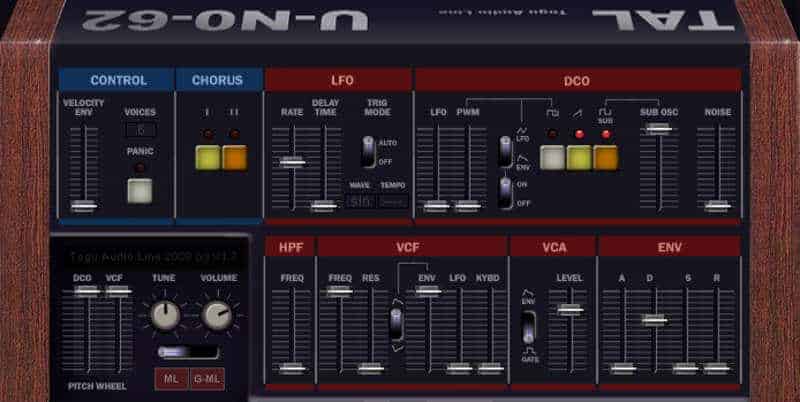 TAL-U-No-62 is an old-school virtual instrument that emulates an old-school analog synthesizer. It is a virtual recreation of Roland’s legendary Juno-60 synth.

Togu Audio Line’s freeware Juno is more than a decade old. As a result, it doesn’t offer the latest and greatest DSP technology and analog emulation. However, TAL-U-No-62 is still a pretty solid virtual analog instrument that undeniably captures that classic Juno-60 vibe.

TAL-U-No-62’s oscillators and the low-pass filter won’t blow you away. But, the chorus module is where this virtual Juno-60 keeps its secret sauce. Turn on the chorus effect, and TAL-U-No-62 instantly sounds much closer to the original hardware.

Even better, you can download that same chorus as a standalone effect from Togu Audio Line’s website. Use the free TAL-Chorus-LX in combination with any virtual instrument for that lush 80s sound.

It’s also worth noting that the same developer offers a more advanced (but still fairy priced at €51) version of this instrument. The paid version is called TAL-U-NO-LX, and it’s the best Juno-60 emulation on the market. 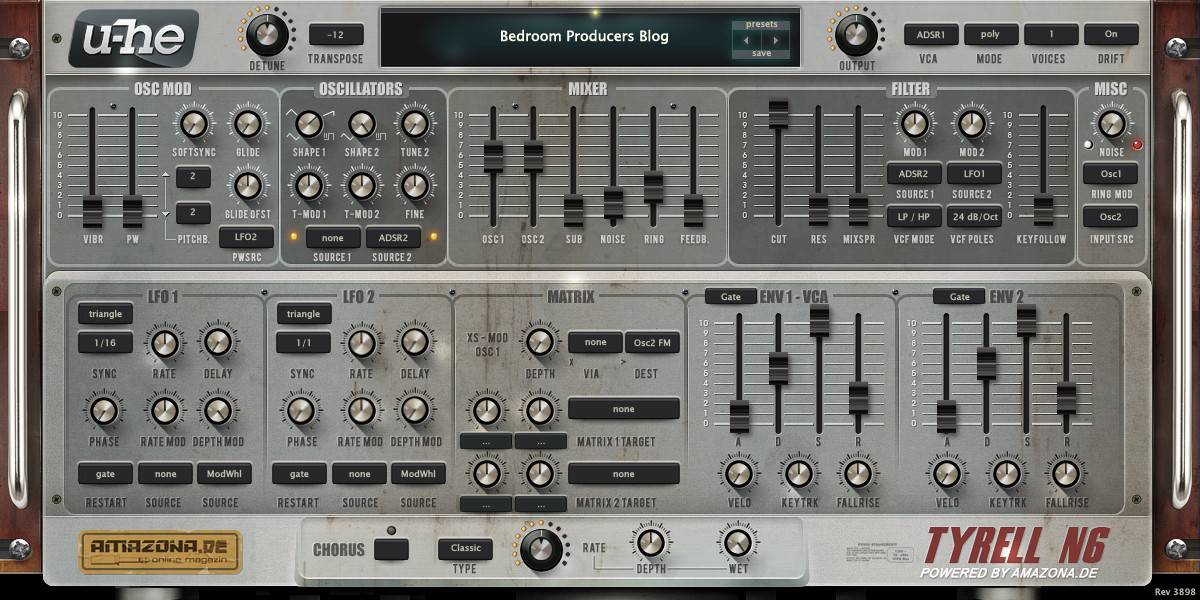 Tyrell N6 by U-He is loosely based on the Juno-60. We originally included it in the “Honorable Mentions” section of this article because Tyrell N6 isn’t a 1:1 recreation of any analog synthesizer. However, we decide to move it to the Top 10 list, following our readers’ suggestion (thanks, BenJ!).

You can think of Tyrell N6 as an 80s analog synth on steroids. All the usual components are there, including a couple of analog oscillators, a multi-mode filter, and a lush Juno-like chorus. You also get several valuable extras like a modulation matrix, ring modulation, feedback, and more.

A dream to program, thanks to its intuitive interface, Tyrell N6 comes with dozens of freely downloadable third-party sound banks. Some of these were created by professional sound designers, so there’s an easy way to add quality synth sounds to your arsenal.

Coming from the developers of industry-leading virtual analog synthesizers like Diva and Ace, the freeware Tyrell N6 is an absolute must-have in any analog synth aficionado’s plugin collection. 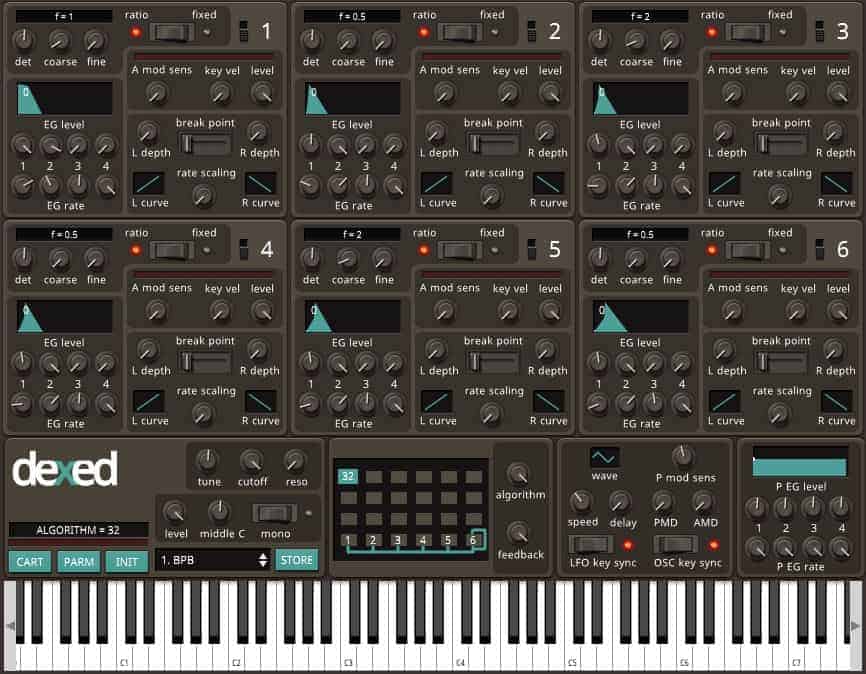 Dexed is a virtual recreation of the Yamaha DX7 and the only FM synth on this list. The plugin emulates the original DX7 so well that it supports its SysEx messages. As a result, Dexed can work as a patch editor for the hardware DX7.

Now, the unfortunate thing about FM synthesizers is that they’re hard to program. But, the good news is that there are thousands of Yamaha DX7 patches available online. And yes, you can load them in Dexed. 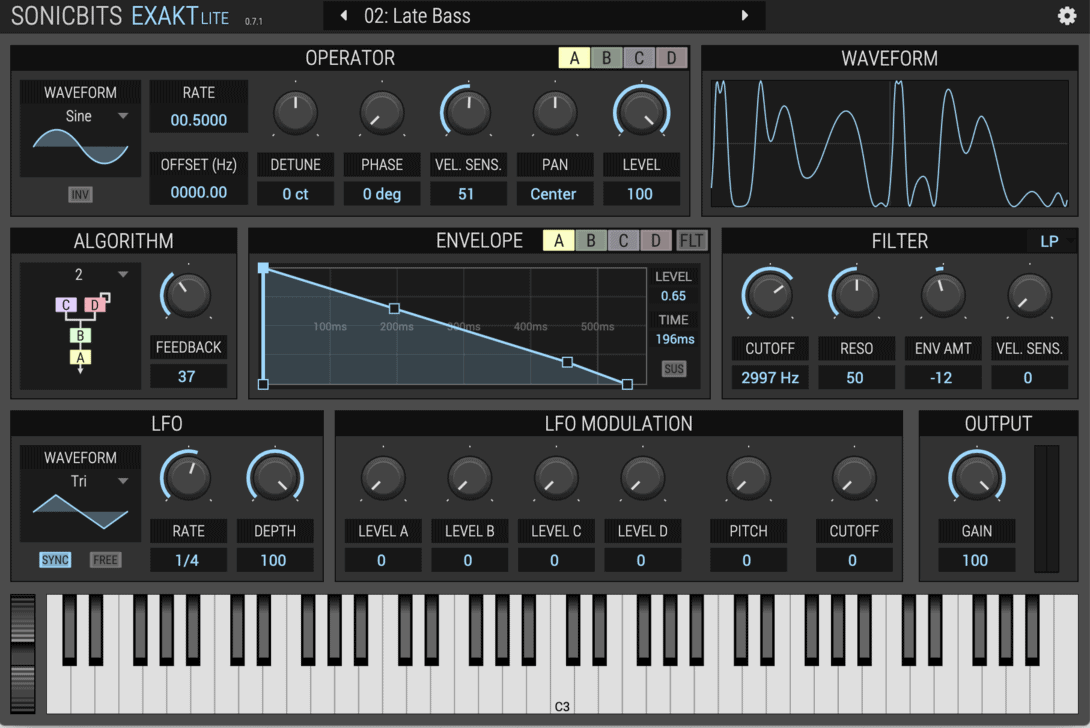 Exakt Lite is based on another classic FM synthesizer from Yamaha. The freeware VST plugin by Sonicbits emulates the Yamaha TX81Z module, which was practically the DX-11 synthesizer without the keyboard.

The TX81Z was a source of many iconic FM sounds, including the legendary ‘Lately Bass’ patch. Unsurprisingly, Exakt Lite emulates this punchy bass sound quite well, and you can find it among the default presets.

The best thing about Exakt Lite, though, is that it’s relatively easy to program. FM synths are notorious for being a hard nut to crack, especially for beginners. Exakt Lite remedies this with a simplified user interface that borrows some of its layout characteristics and features from subtractive synths.

Whether you’re looking for classic FM synth sounds or your goal is to learn more about FM synthesis, Exakt Lite by Sonicbits is well worth the download.

Thanks to BPB reader Sebastian for suggesting Exakt Lite. 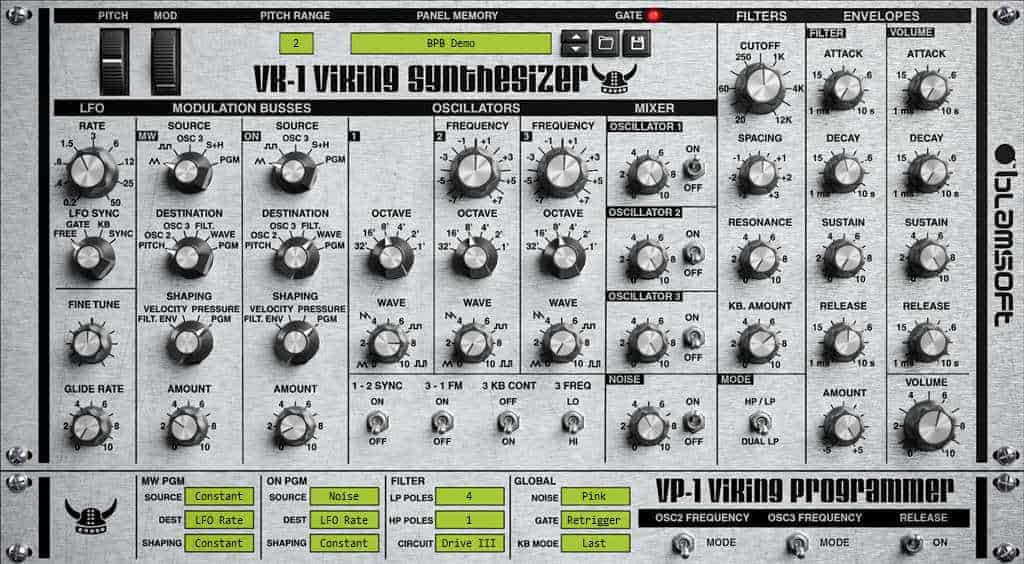 The free VK-1 Viking Synthesizer from Blamsoft is a rather precise emulation of the Voyager. 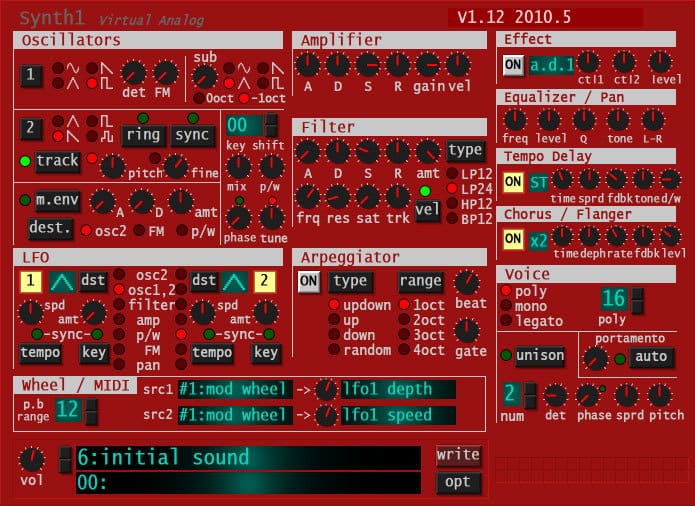 Ichiro Toda’s legendary Synth1 is one of the oldest freeware synthesizers around. Released almost two decades ago (on October 9th, 2002), there’s no denying that Synth1 is a vintage plugin. But it aged incredibly well.

Despite it being a retro plugin, Synth1 emulates the Nord Lead 2 very well. And its deceptively simple-looking user interface offers a surprising amount of synthesis firepower.

Even ten years ago, users praised Synth1 for its low CPU usage. Can you imagine how well it works on modern multi-core processors? You can use dozens of Synth1 instances in a project without hurting your computer’s performance.

However, Synth1’s most significant advantage is the incredible amount of available presets. There are hundreds of Synth1 soundbanks out there, making it the perfect choice for users who don’t like programming sounds from scratch. 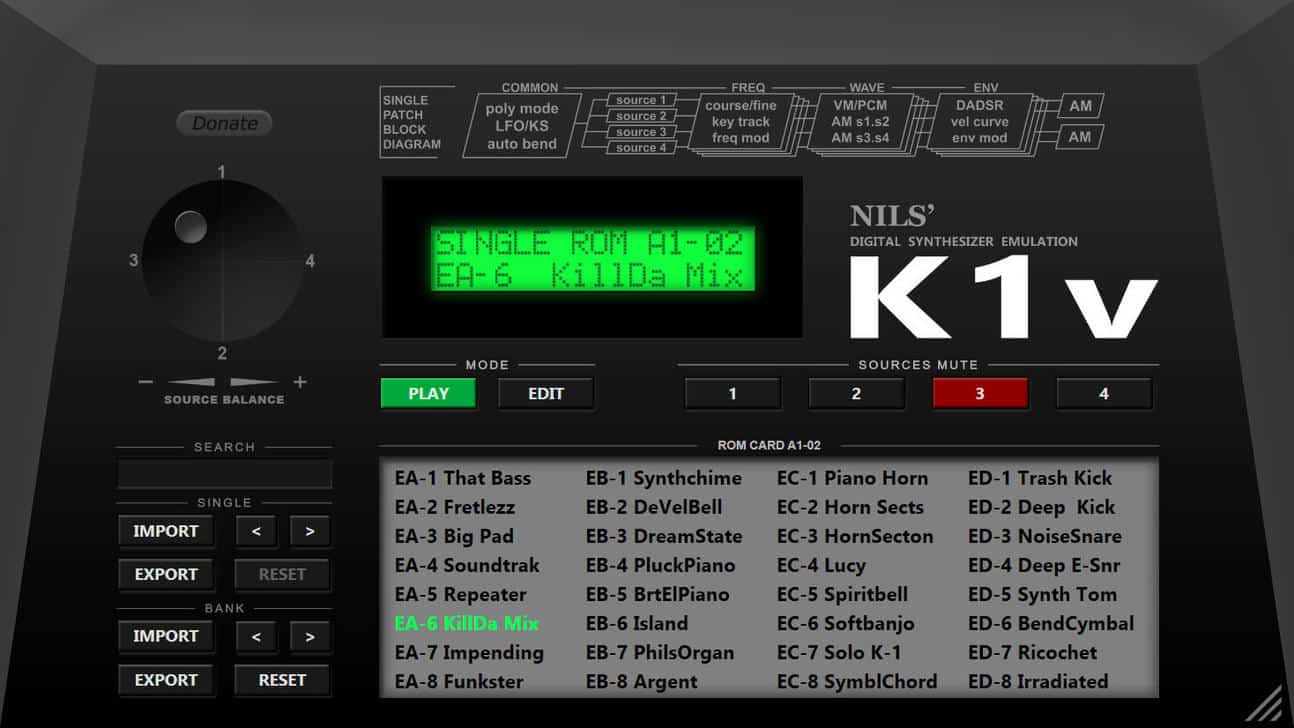 Nils K1v faithfully emulates the Kawai K1 digital synthesizer. It includes K1’s original factory bank and all ROM card expansions, and all this adds up to 768 presets.

The user interface mimics the original Kawai K1 module, with additional on-screen controls for parameters like envelopes and filters. This combination works quite well in the plugin format. Accessing the presets is easy, and tweaking the Kawai K1 sounds in real-time is fun.

The coolest feature in Nils K1v is the ability to morph the preset using the XY controller. It’s a fun way to add movement to pads and huge atmospheric sounds that the Kawai K1 was known for. 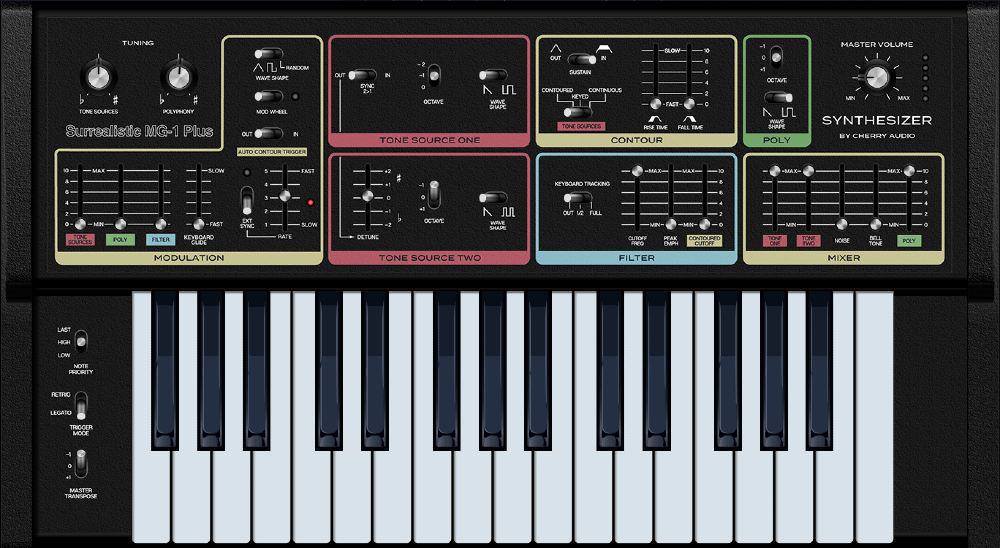 Surrealistic MG-1 Plus Synthesizer emulates the Realistic Concertmate MG-1, an analog synthesizer designed by Moog and sold by Radio Shack in the early 1980s.

Designed by none other than Moog, the MG-1 synthesizer was not a toy, despite its low price and basic design. Back in the day, it was the cheapest ticket to proper Moog-style bass sounds.

The freeware emulation comes from Cherry Audio, the company behind the popular Voltage Modular virtual instrument. Thanks to its simple design and synthesis engine, Surrealistic MG-1 Plus Synthesizer works great both as a monosynth and a synthesis learning tool.

These are retro synth plugins that haven’t made our Top 10, but they’re still worth checking out:

Feel free to suggest additional plugins for this article in the comments section below.