Cybermath is still a work in progress (currently at version 0.115). That said, it is an impressive instrument even in its current state. It really is quite an honor to host this little gem on BPB, with the permission of the developer (you can download it directly from our website in the downloads section below and also donate to the developer in order to support his future work).

After loading the plugin, you’ll be welcomed by a well designed and modern-looking user interface. The different sections of the synthesis engine can be reached by clicking the appropriate button in the lower half of the panel, which may not be the most convenient solution because finding the right button to click usually takes some time. On the other hand, the user interface offers some really neat features such as the built-in oscilloscope and the on-screen keyboard which holds the clicked notes (an incredibly useful tool to use while playing around with the waveform editor).

The central part of Cybermath’s synthesis engine is its oscillator section, consisting of two oscillators with the option of designing custom waveforms from scratch. You can draw virtually any waveform shape imaginable using the built-in waveform editor which is surprisingly easy to use. Each of the two oscillators can hold up to two different waveforms which, combined with the phase modulation and feedback features, make the oscillator section itself a rather powerful sound generator (as showcased in the demo video attached to this post). 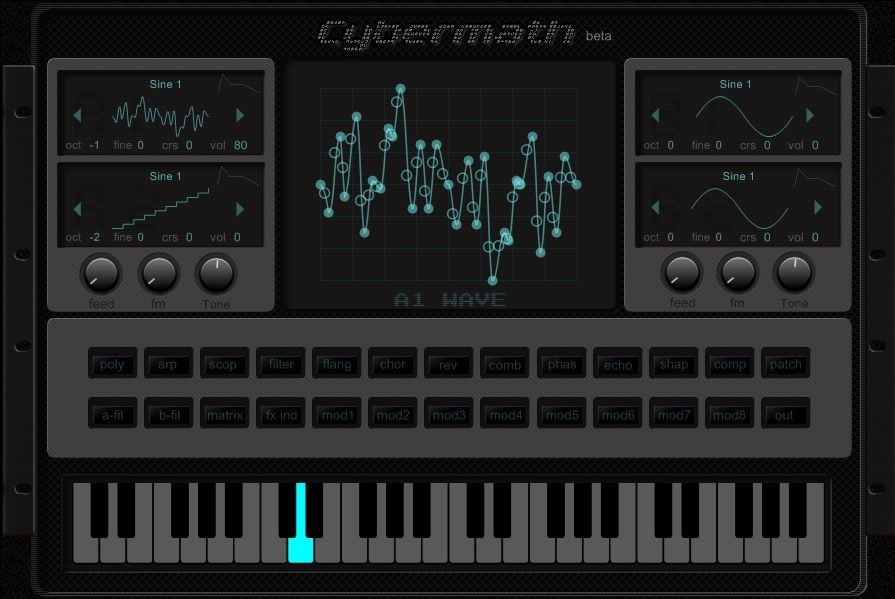 Cybermath is a powerful wavetable synthesizer with user editable waveforms.

No matter how crazy of a timbre you create with the heavyweight category oscillator section and its customizable wavetable oscillators, things will only get crazier once you start adding the other elements of the synthesis engine into the mix. Cybermath features eight fully customizable envelope modulators (things like these make you forget all about the good old ADSR envelopes), an arpeggiator, a multi-mode filter with six different filter types, a powerful effects section (with effects such as chorus, flanger, waveshaping, comb filter, etc.) and a modulation matrix to connect all of these individual elements into what’s basically a sound designer’s dream come true.

And that’s exactly what Cybermath is (or shaping up to become, at least), a sound designer’s dream instrument in the shape of a freeware VSTi plugin!

This is a monster wavetable synthesizer which obviously won’t be everyone’s first pick because of the somewhat unusual and complicated workflow, however it’s one of those instruments which can make wonders in the right hands. If you’re a sound designer or a music producer who enjoys experimenting with wavetable synthesis, you owe it to yourself to download this brilliant piece of work by Ricardo F. Gomes.

Once again, it’s worth noting that Cybermath is still a work in progress. The latest version of the plugin (released yesterday) introduced the option to load and save user made presets. I’m curious to see what the future updates will bring to the table. Many thanks to Ricardo for creating this virtual instrument and for hosting it on BPB!