Vinyl is iZotope’s old-school freeware lo-fi effect. It emulates the quirks of an old turntable, including the pitch imperfections, hiss, noise, hum. It works like any other audio effect in your DAW and applies the vinyl simulation to the audio signal in real-time.

Another neat feature in Vinyl is the “spin down” effect (also known as the “tape stop” effect), which simulates the graduate pitch drop as the record slows down to a halt. Despite being painfully overused by now, this effect undeniably works as the final touch right before a big drop. Just don’t go overboard with it.

The thing about Vinyl, though, is that it’s been around for well over a decade (the Release Notes page on iZotope’s website dates back to 2006 for v1.72). The plugin was still fully functional on modern-day PCs thanks to timely maintenance updates issued by iZotope, but the user interface certainly needed a facelift. That grey front panel was a dead giveaway that Vinyl was released in the Windows XP era. 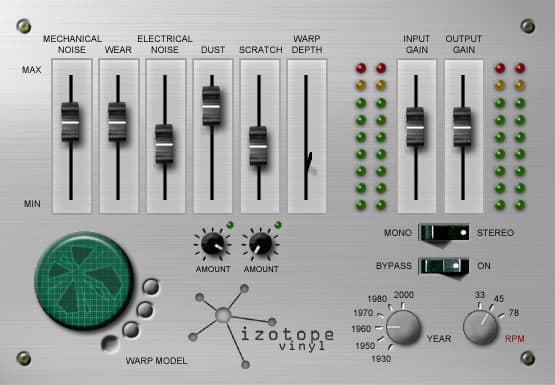 The old iZotope Vinyl design was fine, but it looked dated.

Thankfully, the team at iZotope felt that a GUI overhaul was needed and delivered it in this brand new version of Vinyl.

The most notable improvement is the new user interface design. Vinyl now features the same minimal look as iZotope’s flagship plugins like Nektar and Ozone. It also looks similar to the recently released Vocal Doubler and Ozone Imager, both of which are freeware. 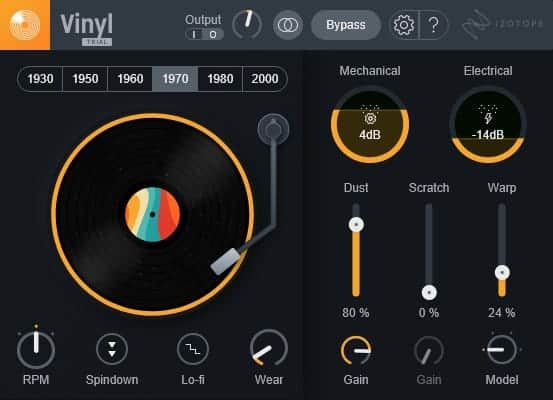 The new version of Vinyl also comes with an updated control layout, which is, in my opinion, more intuitive than the original. The user can now quickly apply the presets (the 1950s, 1960s, 1970s, etc.) by clicking one of the top row buttons instead of rotating a dial. The pitch controls are placed at the bottom, and the audio degradation controls for dust and crackle simulation are located on the right.

Strangely, it seems that the new GUI isn’t freely resizable. It may scale automatically depending on the screen resolution, but I couldn’t find a way to manually resize the interface.

It’s worth noting that the new GUI design isn’t everything that the updated Vinyl has to offer. The plugin now also features a Lo-fi control, which applies bitcrushing to the signal. This isn’t something a real turntable would do, but it’s a useful sound design option nonetheless.

Finally, keep in mind that the support for 32-bit plugin hosts was deprecated. iZotope Vinyl will only work in 64-bit digital audio workstations on PC and Mac. iZotope also deprecates support for older versions of Windows (Windows 7 and older) and macOS (versions 10.12.x and older).

On a related note, you can now get a no-brainer 95% OFF deal on the iZotope Holiday Bundle at Plugin Boutique. Get the iZotope Elements plugins, iZotope Iris 2 synthesizer, iZotope Trash 2 + Expansions, and more software by Exponential Audio.

GET THE DEALiZotope Holiday Bundle (95% OFF)

iZotope Holiday Bundle is priced at $59.99 and the value of the included software is $1,105.90 if purchased separately.

After logging in, you will instantly receive a serial number that should be entered, along with your account info, when launching the plugin for the first time. Before activation, Vinyl will work in a 10-day trial mode.