IK Multimedia follow3 up on the MixBox modular FX rack for desktop with an equally powerful virtual rack for iOS.

The portable edition of MixBox works on most iPad devices (check the compatibility page on IK Multimedia’s website) and promises to bring the power of desktop audio plugins to iOS.

Available both as a standalone iOS app and an Audio Units v3 plugin, it has the potential to add more mixing power to your iPad music studio. Let’s take a close look at IK Multimedia’s latest iOS offering.

Most of the FX modules are based on the same code as the products in IK Multimedia’s desktop T-RackS 5 and AmpliTube 5 plugin suites.

But, IK Multimedia also included some brand new effects, such as the Tape Cassette module (a personal favorite), and a new set of algorithms for the hall, plate, room, and inverse reverbs.

Interestingly, the iOS edition of MixBox is fully compatible with the desktop version of the software, to the extent that you can exchange the presets between the two platforms.

Save a custom preset on your iPad and load it later on your desktop PC (or vice versa). Transfer the presets via email, a flash drive, or any other standard file sharing method. To access the imported preset on your iPad, use the “open with MixBox” option in the Files app.

The app’s standalone version can hold up to eight API 500-style virtual racks, each with eight module slots. The front panel (aka the Rack View) is where you load the FX modules, adjust their parameters, store and edit presets (both for the entire rack and the individual effects), control the output volume, the side-chain input gain, and monitor the audio levels.

The back panel (aka the Edit Panel) is where you’ll find the dry/wet controls, solo buttons, and side-chain input knobs (which only show up if the loaded FX module supports the side-chain feature) for each FX slot.

Another essential feature is the audio player module in the lower-left corner of the interface. It’s a handy way to experiment with the standalone version of MixBox without using any audio inputs. Load an audio file and play it as a loop while experimenting with the available effects.

The audio player lets you playback audio files in MixBox for iPad.

There are ten FX types to choose from: guitar amps, channel strips, delay, distortion, dynamics, EQ, filter, modulation, reverb, and saturation. While the categorization is on-point in most cases, some of the effects are perhaps a bit misplaced. For example, the Phonograph module, which is primarily a lo-fi tool, is filed under saturation effects.

Categorization nuances aside, the FX collection on offer oozes versatility and quality. I won’t go into details about each module, but let’s say that IK Multimedia didn’t skimp out on audio quality in any category.

The guitar amps are just as good as the desktop T-RackS 5 offerings, the reverbs are lush and realistic-sounding, the compressors are some of the best you can find on iOS, and the modulation effects provide an inspirational sound design toolbox.

Here’s a quick look at some of the best FX modules that come with MixBox for iOS.

Saturator X is an analog saturation tool based on the T-RackS 5 plugin with the same name. It features ten saturation modes, modeling the behavior of analog tape machines, recording consoles, and tube amplifiers. 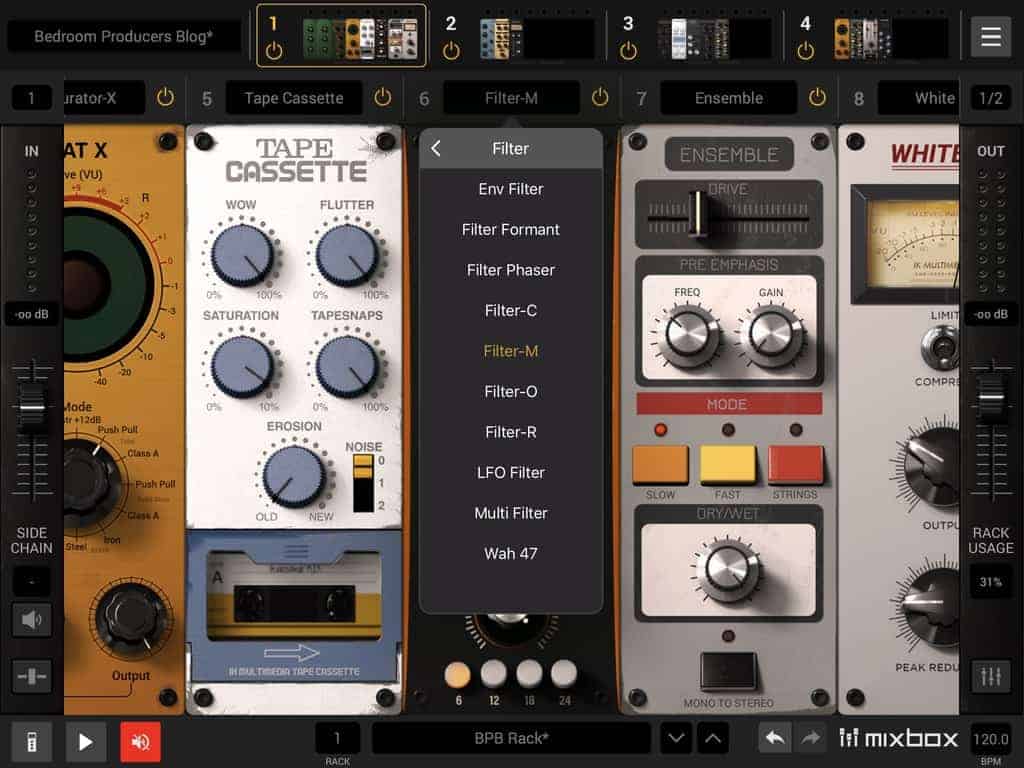 Use the drop-down menu to quickly access the available FX modules.

White 2A emulates the classic tube-based LA-2A leveling amplifier. Use it to gently compress vocals and to bring out the character in any recording.

Hall Reverb is one of the best-sounding reverb effects currently available on iOS. It uses IK Multimedia’s improved hall reverb algorithm that sounds good without throttling the CPU. The user can select one of the three included hall reverb modes and fine-tune the room size, decay, pre-delay, hi-pass filter cutoff, and tone parameters.

It’s also worth mentioning a couple of hidden gems, which happen to be my personal favorites.

The first one is the Ensemble module, which delivers a lush Juno-style chorus that works incredibly well on synths and guitars.

The second is the Tape Cassette module, a deceptively simple (yet undeniably effective) lo-fi tape effect. I like to apply a small amount of flutter and drive to almost every virtual synth, resulting in a subtle layer of “je ne sais quoi” that makes everything sound better.

The added value here is the ability to create a custom FX chain and store it for later use. Load your favorite EQ, compressor, vocal reverb, dial in your go-to settings, and save the entire rack as an all-in-one vocal processing kit. The same FX tools and settings are just a few swipes away next time you’re working on a project.

If you’re planning to use the MixBox as a live plugin, the ability to host multiple racks can come in handy. You can have up to eight racks running simultaneously, and each rack can be assigned to a different audio channel. Speaking of which, the Audio Setup Panel is where you’ll find all the advanced audio settings in the standalone version of the app.

The AUv3 plugin version of MixBox has one notable limitation compared to the standalone app, and that is the inability to load multiple racks within one plugin instance. When you load the MixBox AUv3 plugin in a host app like Cubasis or AUM, there’s only a single rack to worth with.

While that may seem like a considerable downgrade compared to the standalone app’s eight rack slots, I didn’t mind it at all in real-world use. A single MixBox rack with eight module slots offered plenty of room for building custom FX chains in AUM. When I needed an additional MixBox rack on the same audio channel, I’d simply load another plugin instance.

One minor workflow issue I experienced is that the AUv3 plugin always loads in this slightly awkward “minimized” state. I would have to manually resize the plugin window each time I loaded a new MixBox instance. It would have been far more convenient if the plugin remembered the previous instance’s size when loading a new one. 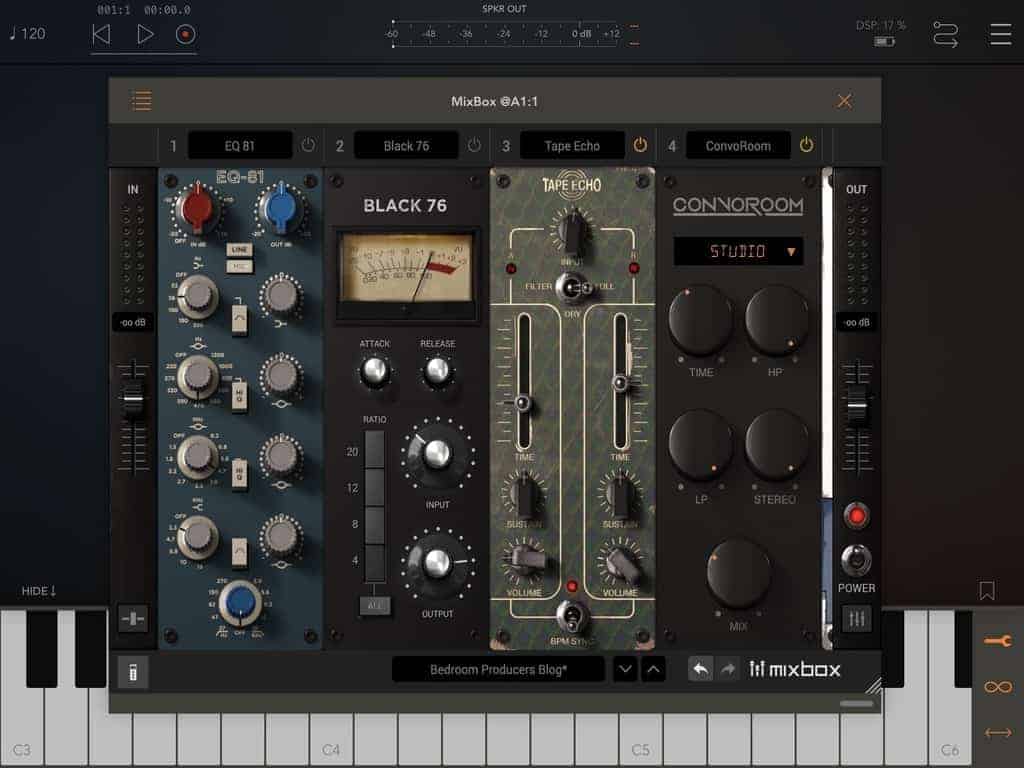 Using MixBox for iPad as an Audio Unit Extension in AUM.

As for the performance and stability, the AUv3 plugin version of MixBox passed the test with flying colors. I haven’t noticed any bugs nor CPU spikes, and the overall performance was just as smooth as when using the standalone app.

In my opinion, the AUv3 plugin is where the iOS edition of MixBox truly shines. It adds a collection of 70 high-quality effects to any AUv3 plugin host, and it’s impossible to match that premise with any other iOS offering at the moment.

If your current digital audio workstation on iOS lacks in the built-in effects department, MixBox is the studio upgrade you’re looking for.

To summarize, the iOS edition of MixBox is just as good as its desktop counterpart. If you’re looking for a portable toolbox of 70 audio effects based on IK Multimedia’s top-tier VST plugins, well, this is it.

The only thing that’s probably stopping you from visiting the App Store and purchasing MixBox this very moment is the price. It’s not exactly a bargain.

However, being that the median price for iOS audio effects is around $5 per plugin, the introductory price of $39.99 (that’s 50% OFF full price) for MixBox is a reasonably good deal. You’d pay less than 60 cents per audio effect.

And that’s not to say that MixBox is just a collection of 70 audio effects. You’re also getting 600 multi-FX presets and the ability to create your custom plugin chains for later use.

In the end, it’s up to you to make the final choice. There’s no official end date for the 50% OFF intro offer (and it’s safe to assume that the discount will probably be available again at some point in the future). Still, for the price, I highly recommend MixBox as the next upgrade for your iOS-based music production rig.

If you're looking for an ultra-portable toolbox of 70 audio effects based on IK Multimedia's top-tier VST plugins, well, this is it.