GroundControl allows you to send audio from one application to another with zero latency. The Ground Control virtual audio drivers have 3 settings, 2 channels, 16 channels, and 64 channels.

Like most monitor controllers, it has a large central knob for the output level; remember, this doesn’t affect the input level, only output. It’s pretty cool that it has a nice meter for visual feedback, too.

GroundControl is an alternative to the popular Soundflower app. Soundflower was incredibly useful and easy to use, but it didn’t keep up with changes to macOS and became virtually defunct. Blackhole became an obvious successor, but I’m not sure how well that works (if at all) anymore post-macOS Catalina.

So, here we are now with GroundControl, and if you’ve never used an audio router like this, you can think of it like virtual audio cables.

If you check out the website, you can see a list of applications that could benefit from GroundControl, including OBS, YouTube, Spotify, and Zoom. If you are a podcaster, streamer, or you do any form of online education, GroundControl by Ginger Audio is for you. 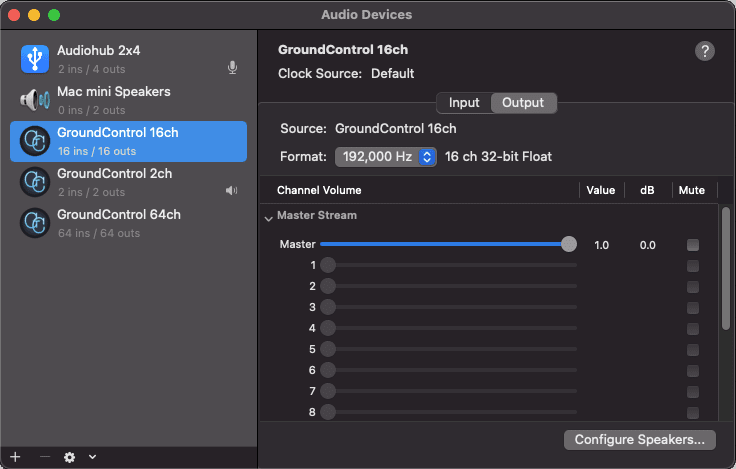 The MIDI setup panel in GroundControl.

One of the most common uses for Soundflower in its day was to record your system sound into your DAW. In other words, it was the go-to app if you wanted to record audio from a web browser, like a YouTube video into your DAW.

GroundControl is a simple app that you probably won’t realize you needed so much until you have it. Right now, it’s macOS only, but a Windows version will be available at some point.

Up to 192kHz with zero latency, and the latest M1 chip and macOS Big Sur are supported. It’s nice to be a macOS user and not be scared an update will prevent something from working for a change!

Downloading GroundControl is easy. Visit the product page linked below, submit your email address, and you’ll receive a download link.

James is a musician and writer from Scotland. An avid synth fan, sound designer, and coffee drinker. Sometimes found wandering around Europe with an MPC in hand.